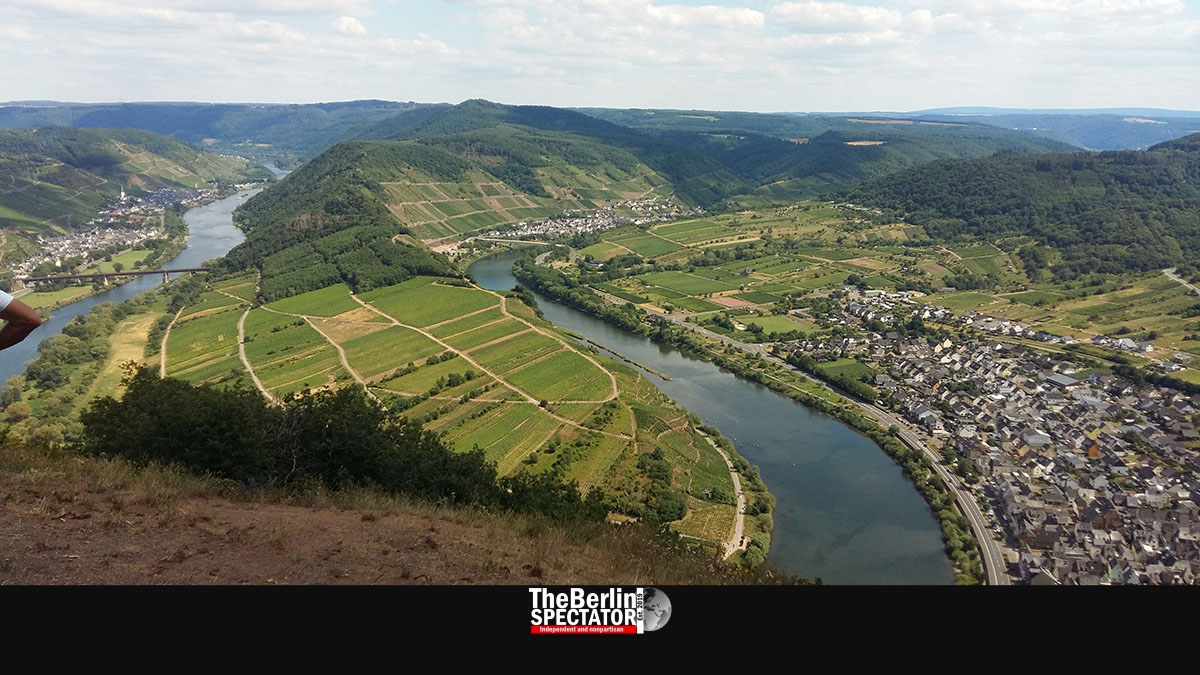 It’s impossible to imagine the hills that skirt the Mosel River without their vineyards. Fortunately, you don’t have to.

Berlin, May 14th, 2021 (The Berlin Spectator) — The grapes that are vinified into many of Germany’s best Rieslings have been there at least since 371 A.D., when Decimius Magnus Ausonius, a tutor to Roman emperor Gratian, wrote his poem Mosella: “Greetings, river, admired for your adjacent fields, admired for your farmers: o river with Bacchus fragrant grape planted on your vineyard-filled ridges, o greenest river, planted on your grassy banks.”

Like a good wine list, the Mosel is open for any taste, mood or budget. Sophisticated retired couples wearing crisp pastels and matching summer hats cruise conspicuously along the riverside in their top-down convertibles. Young families with bulging saddlebags coax along their children as they bike to the next B&B. Neo-hippie minivans and elongated luxury RVs with satellite dishes amiably share precious riverfront campgrounds that often fill up by noon. Trampers munching on walnuts and dried fruit relax in the playfully oversized reclining chairs that line the river.

The Mosel wine country is surprisingly underrated and, one could argue, underappreciated. The region attracts 7 million overnight stays per year. But if you ask anyone in Germany whether they’ve been there, most people shrug and shake their head. “No.”

The German section of the river eases its way through the heart of Rhineland-Palatinate from where it peels off from the Rhine in Koblenz to the history-laden city of Trier near the Luxembourg border. To give a sense of how windy it is, that’s 94 km as the crow flies but 220 km of waterway.

Not to take anything away from the Mosel’s world-class winemakers, but they owe a great debt to geography and luck. It is the intimate relationship between the hills, the climate and the grapes that makes Mosel wines what they are. Hobbyists can recite by rote the many well-studied reasons for their gentle, throaty sweetness and profound depth of flavor.

While Riesling is cool-climate grape, it also benefits from the abundant year-round sunshine that nurtures the grapes to ripen gradually to full maturity. This “long hang-time” produces elegant but easy-going wines that surprise and satisfy. “They’re juicy and complex,” says Andreas Offinger, a wine ambassador at Heinrich Basten in Ellenz-Poltersdorf, situated one elbow-turn downstream from the tourism hub of Cochem.

Happenstance also has provided the rocky soil of volcanic red slate that stores the sun’s heat by day and releases it at night. The gravely earth drains water perfectly while also enabling vine roots to penetrate deeply into the ground in search of salty minerals. The final touch is the perfect angle of the hills themselves, which allows the tapered grapevines to soak up sun the entire day without shadowing neighboring rows. The Mosel’s more than 500 vintners are more than happy to thank nature for providing these ideal conditions.

Just as sweet and satisfying, but little known outside the region, is a rare type of peach believed to grow only along a short stretch of the Mosel around Cochem. Grey on the outside and maroon on the inside, it is the “red vineyard peach” – better known as the ‘roter Weinbergpfirsich’.

A true cottage industry worthy of preservation and respect, family farmers turn this odd-looking lemon-sized fruit into luscious jam and silky liquor. A wine aficionado pondering comparisons might say these delicacies bear a hint of forest berries and citrus that would go well with homemade vanilla shortbread. Take care: Unless you ask for them in local specialty shops, you might miss these treats altogether.

Believed to have been introduced by the Romans 2,000 years ago, the “Persian apple” is celebrated in Cochem on the Blossom Festival in April and Peach Day in September. Locals know and appreciate what they have: They guard the location of the remaining ‘Weinbergpfirsich’ trees with an almost superstitious reverence.

Like pretty much everywhere in Germany, history is kept alive and well along the Mosel. The top-shelf attraction is Eltz Castle. Fairytale-like but foreboding, Eltz is one of only three castles on the Rhine’s left bank never to have been seriously damaged. Plunked in the middle of a dense forest out of view from the river, the 100-room hilltop wonder has been the uninterrupted home to 33 generations of the Eltz family dating to the 12th century.

Hundreds of medieval castles, forts, churches, monasteries and other structures remain in various states of condition and popularity. Many are worth the steep hike up the wine hills, which also rewards you with memorable views. If you do a little freelancing, you can see ruins and reconstructions of Roman estates, temples, burial sites and even a some wine presses. Historians call it the largest collection of Roman artifacts north of the Alps. Trees that line a rugged path to one such ruin eject exploding seed pods that crackle and pop when they burst.

And, like most history, many tales that still drift around the Mosel may not be 100% historically accurate. The screw-top spire of the St. Clemens Church in Mayen, which was reconstructed after World War II, probably wasn’t formed by the flame-twisted tail of the Devil. The swirled tower, one of only 20 in Germany and 100 in Europe, makes for a nifty optical illusion when driving past. But no one believes Lucifer made it when a virgin got married in the church, promising to untwist it when the next chaste bride came along.

More legends abide in Trier, believed to be Germany’s oldest inhabited place dating back 16,000 years. We do know that the collection of the understated City Library includes one of only 49 Gutenberg Bibles believed to still exist. We know that up the street is the gargantuan Porta Nigra (“Black Gate”), a 2nd-century sandstone edifice built by the Romans and reconstructed by Napoleon in 1804.

We also know that the High Cathedral of Saint Peter was built on the site of the oldest church in Germany. Dating to the 4th century, the original structure was built by Constantine the Great atop the palace of his mother, Helena. The church claims to possess a nail from the True Cross and a piece of Jesus’ robe that Helena, who was obsessed with the crucifixion, reportedly hunted down. These assertions will remain unverifiable.

Like the vineyards, one cannot conceive of the Mosel without its myths and legends. Together, the river runs through all of it. It is what holds the place together, sustains it, and refreshes it. It makes the place what it is – close enough for the senses, but far enough away for the imagination.

Mark Worth is the executive director of the European Center for Whistleblower Rights and Whistleblowing International, non-profit organizations based in Berlin. He is a member of the UN Expert Group on Whistleblowing, an advisor to the European Union and an award-winning journalist and publisher.