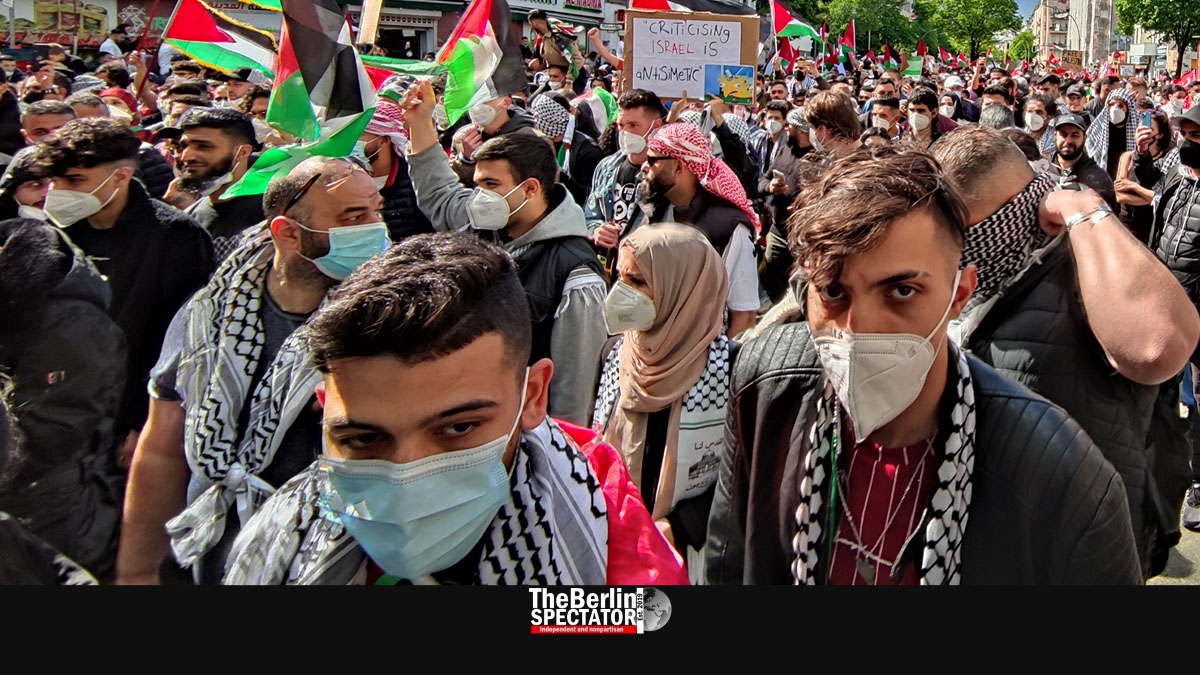 On Friday and Saturday, as many as four anti-Israeli rallies took place in Berlin. At all of them, the participants denied Israel its right to exist. One of the protests was staged by the terror organization Samidoun.

Berlin, May 15th, 2021. Update: May 16th, 2021, 6:47 p.m. CEDT (The Berlin Spectator) — Thousands of mostly Arabic and Turkish protesters took to the streets in Berlin on Friday and Saturday in order to spread hate towards Israel. Germans and persons of other nationalities took part in two of the rallies as well. At all four protests, participants demanded a “Palestine from the river to the sea”, which is code language for annihilating Israel. They also called for an end to Israel’s bombing raids in Gaza, but not for stopping the missile attacks against Israel, which triggered Israel’s military operation against Hamas in the first place.

At a protest on Friday, some 1,000 Arabs and Turks marched from Kottbusser Tor, a big intersection in Berlin’s Kreuzberg borough, to Sonnenallee, a major traffic artery. According to the Berlin Police Department, slogans that were “hostile towards Israel” and which glorified violence were chanted. When this happened, the police documented the cases and registered the identities of those who spread the terror propaganda. Berlin’s State Office of Criminal Investigation is now in charge. Even though the police ordered the protesters to refrain from this kind of chants and to adhere to the Corona rules, many participants did not. As a result, two hundred persons were excluded from the protest by officers in riot gear.

The other three protests were very similar and took place today. In the early afternoon, some 200 persons were part of a rally against Israel. Many more, thousands, came to Hermannplatz, a square in Berlin’s Neukölln district, at 3:00 p.m. for yet another demonstration, the one Samidoun staged. This group claims to be an NGO that helps Palestinian prisoners in Israeli jails. In reality, it is part of the terror organization PFLP. In Israel, Samidoun itself was designated as a terror organization in February.

The PFLP is responsible for many terror attacks in the past several decades in which numerous people, mostly Israelis, were killed. In spite of the fact that the PFLP hijacked a Lufthansa jet full of German vacationers in 1977 and murdered its pilot, the organization has not been banned in Germany. It might finally happen soon, because more and more politicians and officials are demanding a step of this kind.

Samidoun is a subsidiary of the PFLP. It is being led by Khaled Barakat, a high-ranking PFLP member, and his American wife Charlotte Kanes. Both of them lived in Berlin for a while, where they organized events with antisemitic content, including speeches the PFLP terrorist Rasmea Odeh was supposed to hold, until they were banned by the German authorities. In June of 2019, both Barakat and Kanes were told their residence permits for Germany and the Schengen stages would not be prolonged, presumably because of their pro-terror activities. Shortly after, they moved to Canada. But Samidoun is still looking for members in Germany, staging “online seminars” and protests, like the one in Berlin today.

At Samidoun’s terror protest on Saturday, Israel was accused of being a “child murderer”, an “Apartheid state” and a “dictatorship”. In chants, people called for a “bombardment of Tel Aviv”. About an hour after it began, police ended the rally, also because its participants refused to follow the Corona rules. At this point, the police were attacked by a mob that was part of the protest. Bottles, stones and lit firecrackers were thrown at officers.

Fifty-nine arrests were made at the Samidoun protest. In 150 cases, the contact data of individuals were registered. Ninety-three police officers were injured, the Berlin Police Department said on Sunday afternoon. A total of 3,500 people took part in this particular rally. They included German members of the antisemitic BDS movement. During this event, many hostile statements about Israel were documented and forwarded to the State Office of Criminal Investigation.

Yet another anti-Israeli protest took place at Kreuzberg’s Oranienplatz at 4:00 p.m.. This one was staged by a group that calls itself ‘Palestine Speaks’. Here, the same conspiracy theories about Israel were spread. The difference: The police say they did not have to take measures against the 2,500 people who took part during this march, apart from some announcements in Arabic and German via loudspeaker systems.