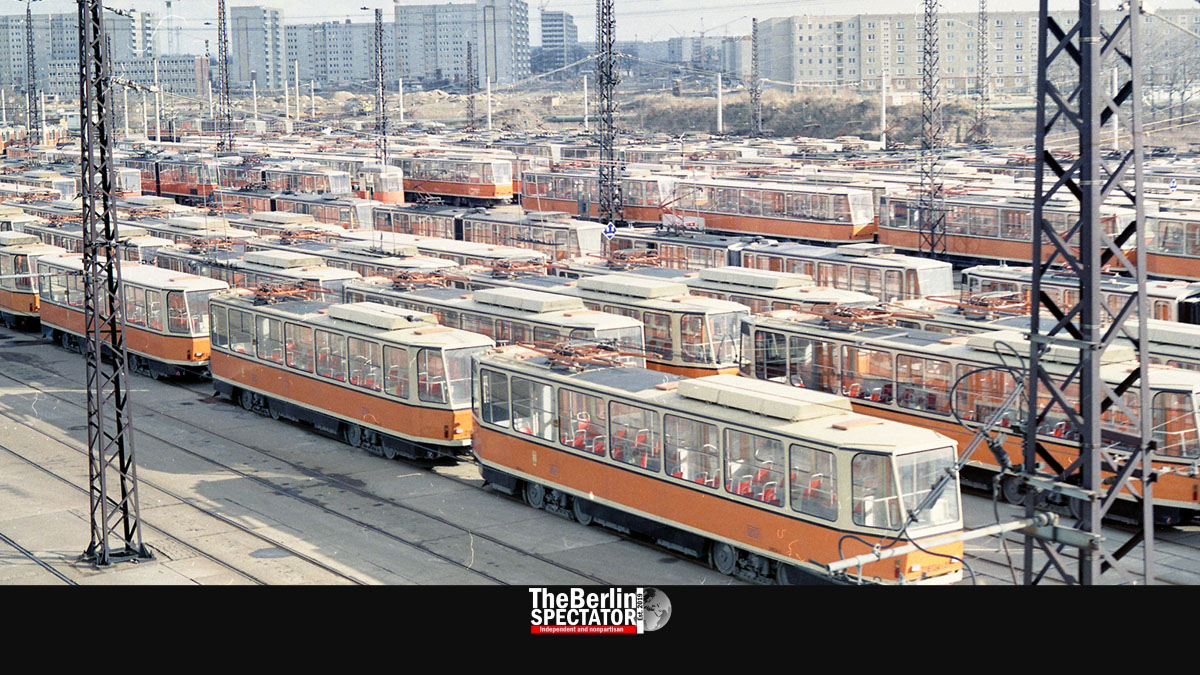 One hundred and forty years ago today, the first electric tram took passengers from Lichtenberg to Berlin. This means of transport survived both wars and the separation of the city. Today, many Berliners still rely on the tram.

Berlin, May 16th, 2021 (The Berlin Spectator) — Until 1880, Berlin’s trams were pulled by horses, which meant a high consumption of oat and water. Then, starting on May 16th, 1881, there was a sensational development: The first electric tram transported passengers between Lichterfelde, which used to be an independent town back then, and Berlin. Werner von Siemens was the inventor who made this giant leap for mankind possible. Two years earlier, in 1879, he had presented the first electric locomotive.

Compared to trams propelled by horses, electric trams turned out to have advantages: They were a little more reliable and they did not sh*t on the street. At 20 km/h (12 mph), they were pretty fast too. The impressive distance the first electric tram covered between Lichterfelde and Berlin was 2.5 kilometers (1.6 miles). In 1881, Lichterfelde and Berlin were not the only spots that took trams to the next dimension. A global electric revolution was in the making.

It did not take long until the tram, which the Berliners called ‘die Elektrische’, accelerated further. This applied to both its speed and its growth all over the place. In the year 1900, the total length of tracks in and around Berlin was 400 kilometers (249 miles). There were several companies that offered transportation in electric trams. The largest one was the ‘Grosse Berliner Strassenbahn’. It might sound incredible but in 1918, more than one billion tram rides were counted. Eleven years later, in 1929, there were 93 tram lines.

As today’s main public transport provider BVG accurately states, the tram mirrors Berlin’s history. It benefitted the city’s development, it survived both world wars, the division of Berlin and the reunification. Several times, the tram was being criticized as old-fashioned and ineffective. West Berlin even dumped it in 1967. Yet, here we are, in 2021, and the tram network is not only here to stay, but it is being extended. The Senate is already working on prolonging the tram line M10 into Kreuzberg and Neukölln. And this is only one of several projects of this kind.

Today, Berlin tram’s network of tracks has a length of 195 kilometers (121 miles). “The tram has a big past”, BVG’s new CEO Eva Kreienkamp stated. “Even more importantly, it has a big future.” In times of Corona, the big task ahead should not be forgotten, namely carbon neutral mobility, Mrs. Kreienkamp said. The eco-friendly public transport played an important role here, she stressed. Of course, Berlin’s tram is an integral part.

In 1881, Berlin’s electric trams looked like trams pulled by horses that were not pulled by horses. By 1920, double-decker trams were on the move. During WWII, hundreds of trams and almost the entire overhead wiring were destroyed. In the 1950s, women became tram drivers. A bit later, when the Berlin Wall popped up, the tram lines to West Berlin were cut off. The communist GDR began using trams manufactured by the Czech company Tatra in the 1960s (see main photo at top of page). The last Tatras were just taken off the tracks, only days ago.

For the first time in 32 years, trams moved across ‘Alexanderplatz’ again in 1998. Over the years, Berlin’s trams were modernized. In the 1970s, those trams in East Berlin resembled fish cans. Now, the most modern ones look like space ships that could take off towards Jupiter at any moment.