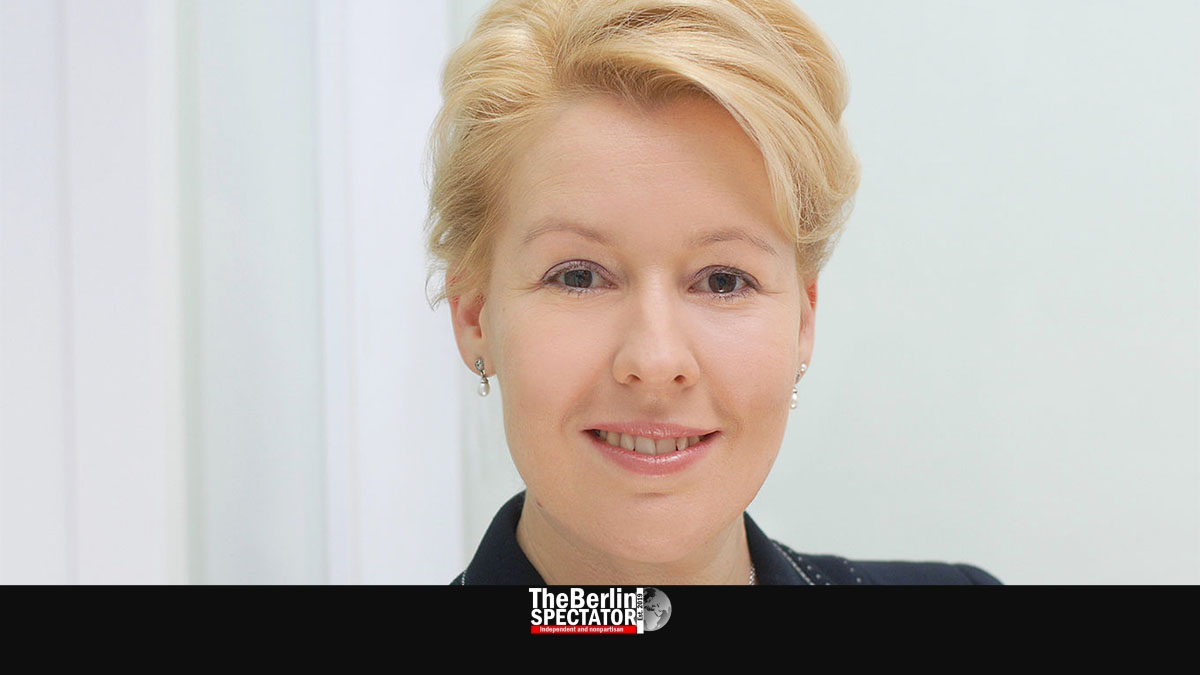 Franziska Giffey asked Chancellor Angela Merkel to accept her resignation as Family Minister on Wednesday. The reason is a plagiarism scandal that has been dragging on for a long time. In spite of the problem she does not want to give up her candidacy for Governing Mayor of Berlin.

Berlin, May 19th, 2021. Update 4:25 p.m. (The Berlin Spectator) — Only four months before the general elections in September, Angela Merkel needs a new Minister for Family Affairs and Women. Franziska Giffey is not the first Minister the Chancellor loses because of a plagiarism affair. The government coalition’s junior partner, the Social Democrats (SPD) do not intend to fill the vacancy, according to German-language media reports. Justice Minister Christine Lambrecht is supposed to take over Giffey’s tasks, in addition to her own.

In February of 2019, Franziska Giffey herself had asked her alma mater, the ‘Freie Universität’ in Berlin, to initiate an investigation procedure into her dissertation about the European Commission and the participation of the civil society in its policies. Back then, the university came to the conclusion that exactly 27 text passages had issues described as “objective deception”. In cases of this kind, dissertations will usually be revoked. But in this case, Minister Giffey was reprimanded.

Later on, the ‘Freie Universität’ restarted its investigation into the matter, because of an independent study which came to the conclusion that reprimands are appropriate in minor cases only. The latter did not really apply to Franziska Giffey’s case, according to the institution. This meant that the scandal reappeared. Back then, Minister Giffey stated she would step down in case the university would revoke her dissertation. But it did not. Franziska Giffey remained in office, and she became candidate for Governing Mayor of Berlin.

But then, in 2020, the proceedings in the case were re-initiated for the second time. By that time, Franziska Giffey was so annoyed about the plagiarism affair which kept on popping up again. She even refused to answer interview questions about the subject. Of course the media wanted to know whether she would give up her post in Berlin (as in German capital) and her candidacy in Berlin (as in city state) in case the ‘Freie Universiät’ would decide to revoke her dissertation. The latter might be the case now.

But before the result of the latest investigation is released, Mrs. Giffey has the opportunity to comment on the findings. The deadline ends in early June. When this third round of proceedings was launched, Franziska Giffey had said she would not use her doctoral degree anymore, no matter what the outcome would be. Today, she stated she had written her dissertation “to the best of her knowledge and belief” and that she regretted any mistakes she might have made. Giffey made clear she would accept any decision the university might take.

‘Matter of My Heart’

Whatever happens, there is one thing Franziska Giffey is not ready to do, which is giving up her candidacy for Governing Mayor of Berlin. “The SPD Berlin and the Berliners can rely on me”, Giffey tweeted. “My word counts. As a Berliner, I will now concentrate on Berlin, the matter of my heart”. The SPD in Berlin intends to defend the position of Governing Mayor against the Greens who are a lot stronger, according to the latest polls. A plagiarism affair does not exactly help in this situation. Still, several party representatives in Berlin, including Interior Senator Andreas Geisel, made clear they would continue to support Franziska Giffey.

Germany: Train Trips Between Berlin and Hamburg to Take a Lot Longer