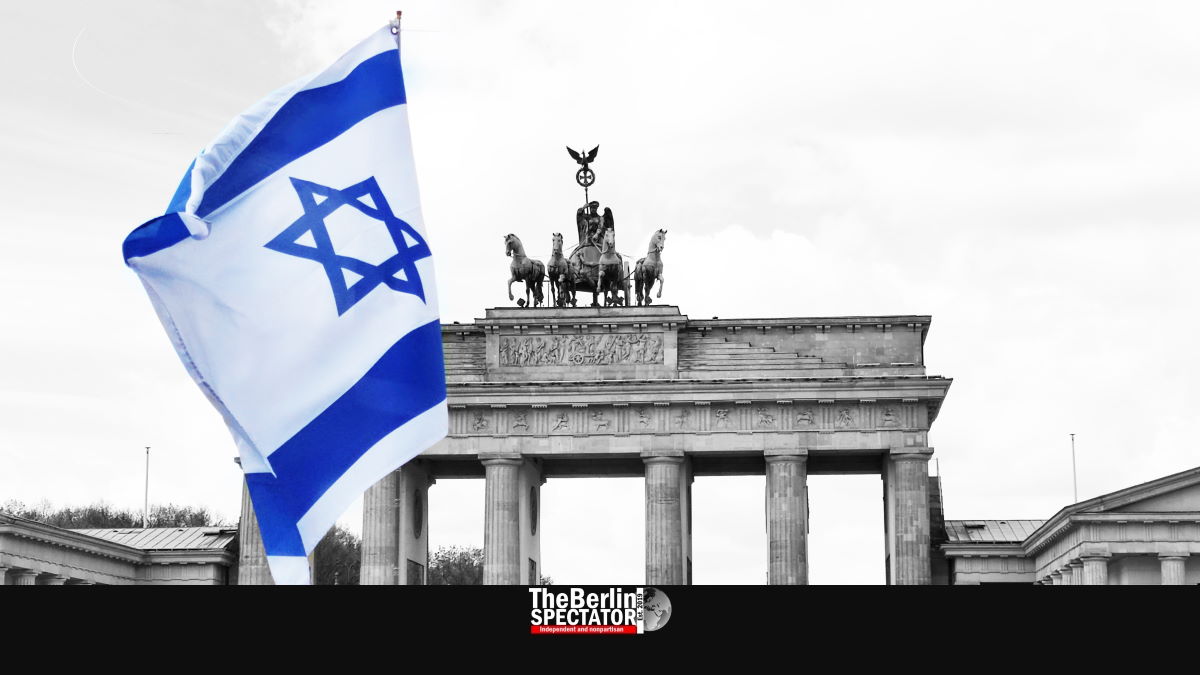 After the anti-Israeli protests of last weekend, Ministers Olaf Scholz Christiane Lambrecht and Jens Spahn, as well as many others will take part in a rally against terror and antisemitism at Brandenburg Gate in Berlin on Thursday evening. A large coalition of organizations is behind the event.

Berlin, May 20th, 2021. Update: 1:48 p.m. CEDT (The Berlin Spectator) — As many as 32 mostly Jewish organizations are appealing to their members and the public to come to a solidarity rally for Israel in the city center of Berlin this evening (Thursday, May 20th, 2021). The Jewish congregation in Berlin, the American Jewish Committee, the Amadeu Antonio Foundation, several student’s organizations, the Young Liberals, a Kurdish group and many others are part of the Solidarity Alliance for Israel which is staging the protest, which was initiated by the the NGO ‘WerteInitiative’. Hundreds of participants are expected at Brandenburg Gate at 7:00 p.m..

Hamas was drawing attention to itself again, by launching thousands if missiles into Israel, the Solidarity Alliance said. This was the moment to show solidarity with Israel, a statement read. Recently, Hamas pulled Israel into yet another war it never wanted, by forcing it to defend itself. The Israeli Defense Forces (IDF) have already hit many terror targets in Gaza. While they are trying to avoid civilian casualties, Hamas is trying to kill as many people as possible yet again.

Hamas’s aggression has an effect in Germany as well, according to the Alliance. There had been antisemitic attacks in the Federal Republic in the past days, it stated. Here, the organizers were referring to several protests in Berlin and other cities, at which an annihilation of Israel was demanded. During some of those protests, mobs attacked police officers. The last pro-terror protest in Berlin took place as recently as yesterday. Synagogues in three German cities were attacked last week.

For Israeli and Jewish persons, the security situation had deteriorated, the Solidarity Alliance’s statement said. In Berlin and elsewhere in Germany, the security for Jewish establishments was tightened when those antisemitic demonstrations commenced. Some of the latter were staged by Samidoun, a division of the Palestinian terror organization PLFP. In Germany, more and more politicians are calling for finally banning it in Germany.

The rally at Brandenburg Gate will call for solidarity with Israel and an end to all kinds of hatred towards Jews. Antisemitism comes in different forms and from different sources. Last weekend, the latest antisemitic rallies showed that the problem of imported Jew-hatred may have been neglected in Germany. There are now demands for deporting foreign nationals who attract the authorities’ attention in connection with antisemitic hate crimes and agitation against Israel or Jews.

For the event on Thursday, the Solidarity Alliance for Israel invited Ministers and representatives of all parties in the Berlin Bundestag, with the exception of the extremist right-wing AfD. Vice Chancellor Olaf Scholz will speak. So will Justice Minister Christine Lambrecht and Health Minister Jens Spahn. For the conservative CDU, its secretary general Paul Ziemiak will speak at the rally, as well as Cem Özdemir of the Greens, Benjamin Strasser of the liberal FDP and Dietmar Bartsch, an MP for the far-left ‘Die Linke’. For the German Federation of Trade Unions, Reiner Hoffmann will be there.