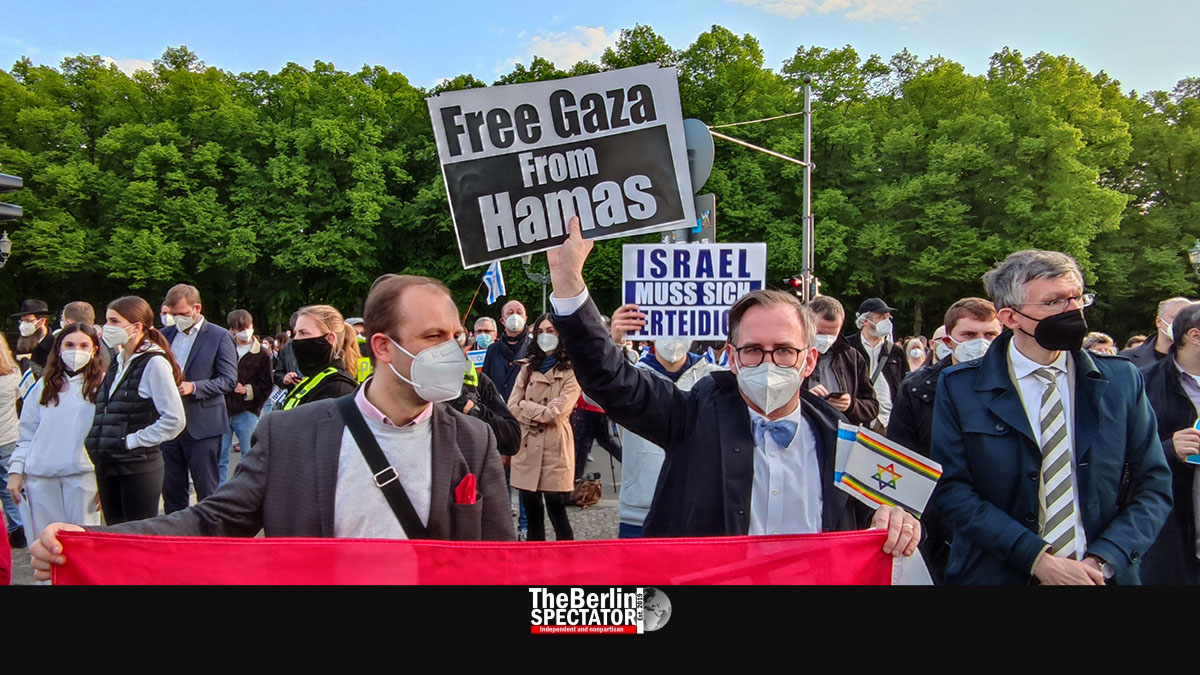 In Berlin, some 1,000 people gathered at Brandenburg Gate on Thursday evening, in order to show solidarity with Israel and demand an end to the terror spread by Hamas. Half the government was at the event. All speakers slammed Hamas and its supporters.

Berlin, May 20th, 2021 (The Berlin Spectator) — “Whoever attacks Jewish life, attacks the identity of Germany’s society and all of us”, Vice Chancellor Olaf Scholz stated at a solidarity event for Israel in Berlin on Thursday. The fight against antisemitism was a task of everyone in Germany, he said. Just saying there was no room for antisemitism was not good enough, Scholz told about 1,000 participants at the protest at Brandenburg Gate which was organized by the NGO ‘WerteInitiative’ for the Solidarity Alliance for Israel. The coalition was joined by many organizations, including Jewish congregations and the American Jewish Committee.

No Justification for Attacks

Germany’s Justice Minister Christiane Lambrecht spoke at the rally as well. She said there was no justification at all for Hamas’ attacks against Israel. The same applied to attacks against synagogues in Germany, Lambrecht stressed. Whoever shouted antisemitic slogans on German streets was committing crimes. The Minister was referring to several pro-terror protests staged by mostly Arab, but also German antisemites in Berlin and other German cities in the past days. Both Scholz and Lambrecht are part of the center-left SPD, but far-left, Green, conservative and liberal-conservative politicians joined them at the solidarity rally. And their party colleague Hubertus Heil, Germany’s Labor Minister.

For Chancellor Angela Merkel’s conservative CDU, its Secretary General Paul Ziemiak said 2021 was a year of elections in both Germany and Israel. But this was a moment at which party affiliations were not important. Right now, the democratic political center was showing it stood with Israel, Ziemiak stated. Cem Özdemir, a Green politician of Muslim descent, said the Palestinians needed to understand that Israel would never vanish from the map.

For the NGO ‘Werteinitiative’ which organized the event, its chairman Elio Adler stated the rally was not against Palestinians or against Islam, but rather against radicals who incited their communities and brought hatred and agitation to the streets. Israel was not fighting Palestinian Arabs either, Adler said. The country was defending itself against Hamas a terror organization that also oppressed its own people and abused the Palestinians.

Elio Adler demanded action against antisemitism in Germany on the part of the country’s politicians. Antisemitic incidents needed to be met persistently and harshly by this nation of law. A consensus against hatred towards Jews in society as a whole was necessary as well, and political concepts. Antisemitic organizations in Germany needed to be banned and the Iranian regime should not be supported.

He also said the United Nations organization UNRWA should not be provided with tax payer’s money from Germany unconditionally, also because it was spreading hatred at Palestinian schools. Antisemitism was indeed directed at Jews, Adler stated. But antisemites were against democracy as a whole. “If Jewish life fails in Germany, liberal democracy fails.”

Security around Brandenburg Gate was tight. There were more bodyguards than government members. The Berlin Police Department protected the event. In this case, the officers made sure the participants were safe. At several pro-terror rallies last week, they had to protect the city from the participants. One of the pro-Palestinian demonstrations on Saturday was organized by the terror organization Samidoun, which is a division of the PFLP, a dangerous terror group. More pro-Hamas rallies that had been registered for the next weekend were just banned by the Berlin Police Department.

In the meantime, Germany’s Foreign Minister Heiko Maas met his Israeli counterpart Gabi Ashkenazi in Tel Aviv. They traveled to Petach Tikva in order to see an apartment block that was hit by one of the thousands of missiles Hamas fired at Israel. In the meantime, Chancellor Angela Merkel told the ARD radio and television network, Hamas needed to be included in any solution to the conflict. Egypt and other states were already talking to the terror organization. The German Chancellor also said Israel was right to defend itself persistently. Hamas’s officially stated goal is to annihilate Israel and murder Jews.