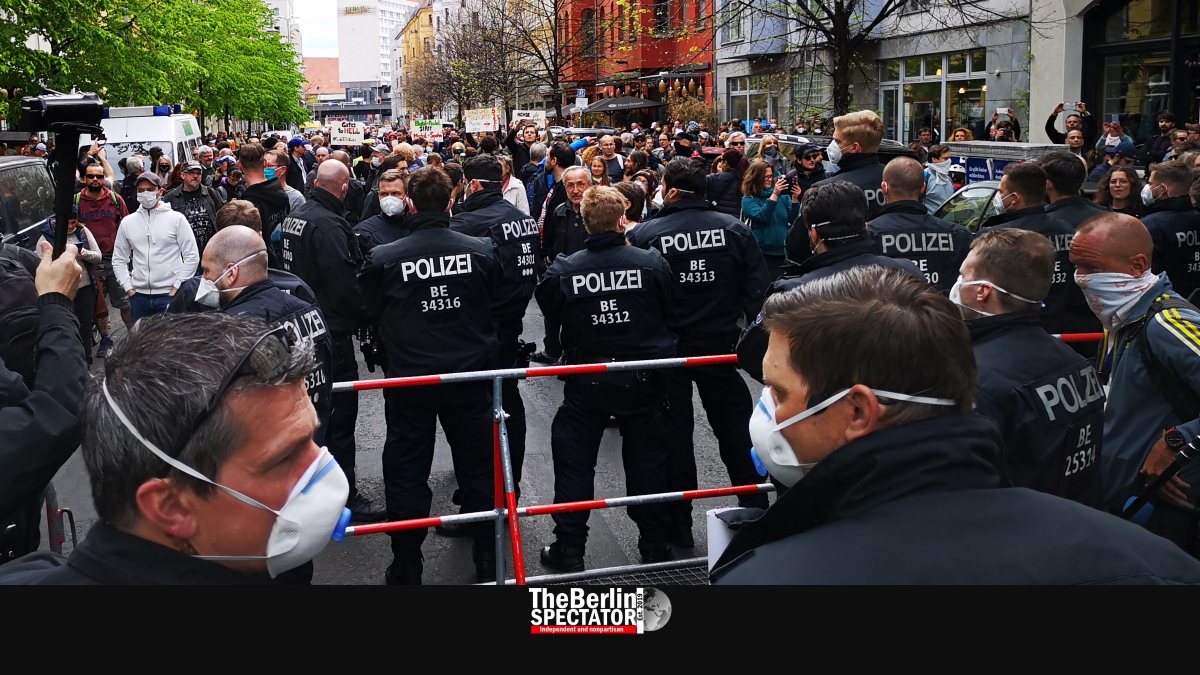 Corona deniers and terror supporters were going to stage more protests this upcoming Pentecost weekend. The authority in charge forbade some of those events, but this might not resolve the problem.

Berlin, May 21st, 2021. Update: 4:07 p.m. CEDT (The Berlin Spectator) — The Berlin Police Department has prohibited several protests that were supposed to take place during the long Pentecost weekend that is coming up right now. Two rallies registered by Corona deniers are not allowed to go ahead. Those events were registered for 16,000 participants each, one on Saturday and the other one on Sunday. According to German-language media, some small Corona denier rallies were banned too.

According to the Police Department, participants of protests of this kind mostly do not adhere to the Corona rules. This is the official reason for the decision. In the past, bans of Corona denier demonstrations have usually held up in court. But the police will have to be prepared anyway. That is because Corona deniers not only tend to disobey Corona restrictions, but also bans of their protests. In the past weeks, they took to the streets in several German cities in spite of bans the authorities had put in place.

On different routes, the conspiracy theorists were going to march towards Berlin’s ‘Grosser Stern’ intersection on Saturday. On Sunday, they wanted to gather between the same intersection and Brandenburg Gate. The police believes there would have been a danger of new Corona infections because of the expected behavior of these protesters, which could have put the entire population in jeopardy.

Last year, the ‘Querdenker’ movement popped up. Its members teamed up with Nazis at countless protests in Berlin, Stuttgart and other cities and spread lies about the Corona pandemic. Most of them say the virus did not exist. Others claim it was not more dangerous than the flu. These protesters also say Corona vaccinations were mandatory, which they are not. Many of the conspiracy theorists actually believe Bill Gates intends to implant microchips into everyone, through the Corona vaccinations.

Some Corona deniers have become violent at protests. They attacked police officers and journalists. Last summer, some self-proclaimed “citizens of the Reich” (‘Reichsbürger’) who were part of a big Corona denier event tried to storm the Reichstag which accommodates the Berlin Bundestag. In one case, individuals who work with the extremist-right wing party AfD gave Corona deniers access to an office building which belongs to the Bundestag.

The Berlin Police Department also forbade another demonstration for the Palestinian terror organization Hamas which is being backed by Iran and which pulled Israel into yet another war one and a half weeks ago. More than 200 people were killed. Like Corona deniers, many pro-terror protesters do not adhere to the Corona rules. This became evident in the past weeks, at several rallies. On Friday afternoon, the police said another reason for the ban was the expected spread of antisemitic hate speech.

Some of the pro-Hamas rallies that took place last week were organized by Samidoun, a group that is part of the Palestinian terror organization PFLP. Samidoun’s attempts to conceal the connection failed. During its latest protest in Berlin, police officers and journalists were attacked. Other Palestinian groups that staged protests, including ‘Palestine Speaks’, spread the same antisemitic propaganda.

Berlin: Reopening of Restaurants and Museums Brings Back some Normality