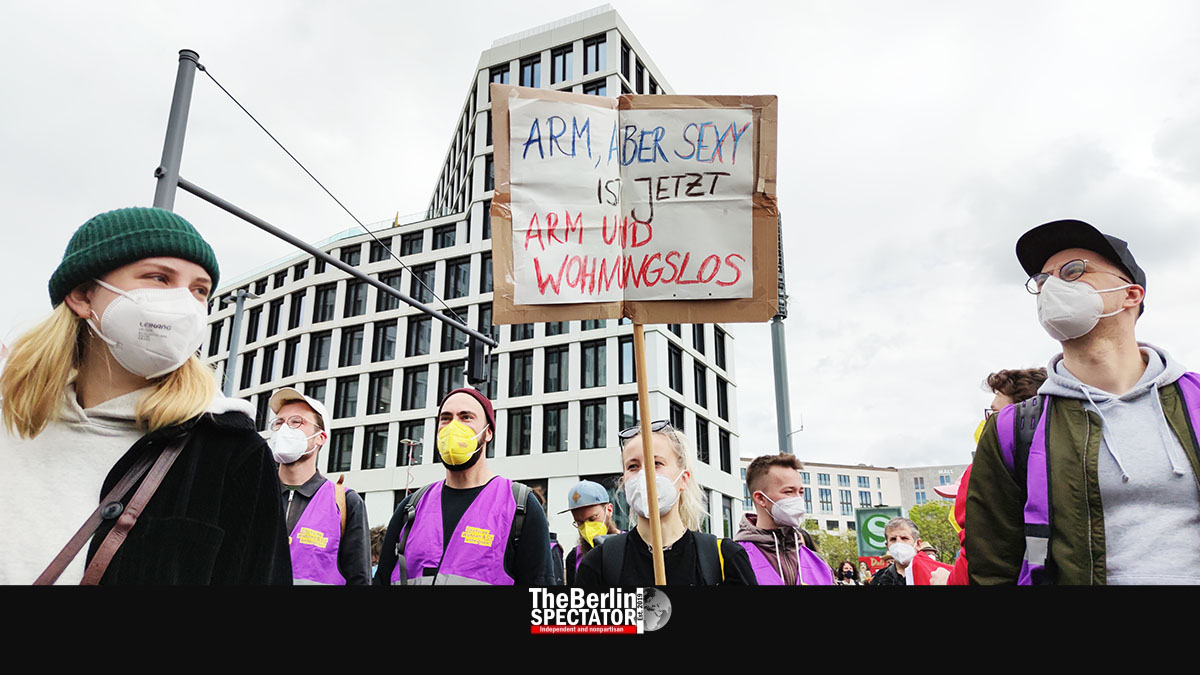 In the center of Berlin, yet another protest took place. This time, it was about the affordable housing crisis in the German capital. The participants demanded an end to the “rent insanity”.

Berlin, May 23rd, 2021 (The Berlin Spectator) — Thousands of Berliners spent their Pentecost Sunday protesting for an end to the affordable housing crisis in their city. Tens of thousands of additional rental apartments are needed. The ones that are available are expensive. Students and even families cannot afford them. Berlin’s Senate failed to improve things when its ‘Rent Cap’, which was supposed to freeze the rents for five years, was sacked by the courts.

Now Berlin is back to square one. The Corona pandemic has worsened the situation. Because of the lockdowns that became necessary to curb the virus, freelancers and many other residents earned less money, or nothing at all. The city state of Berlin’s center-left government coalition is now demanding a nationwide ‘Rent Cap’, because the German capital is not the only city in this situation. The conservatives, on the other hand, keep on saying more apartment blocks needed to be built. The issue is that tens of thousands of Berliners need affordable housing right now.

To many of the protesters, demands for new ‘Rent Caps’ or construction plans in the future are not good enough. They called for dispossessions of large real estate companies. This idea is being supported by the far-left ‘Die Linke’ as well as some Greens and Social Democrats (SPD). Governing Mayor Michael Müller is against this radical step. So is the opposition. Because of the latest ‘Rent Cap’ setback, countless Berliners now owe even more money to their landlords. They have to pay the difference between the capped rent and the actual amount for the past months.

At Potsdamer Platz, one of the most famous squares in Berlin, the police prepared for the big event in the late morning. Because there are many protests this weekend, officers from several federal states came to help the Berlin Police Department. The Federal Police was there as well. At noon, the organizers started setting up their loudspeaker vans, before the rally commenced at 1:00 p.m.. Up to 10,000 people were expected to join the protest.

The organizers want real estate companies that own more than 3,000 apartments dispossessed and reimbursed. They believe the state will make sure the rents for those places will be affordable and fair. An initiative called ‘Deutsche Wohnen & Co. enteignen” (“Dispossess Deutsche Wohnen and Co.”), one of the organizers of today’s protest, is collecting signatures for a referendum on the question of dispossessions. Deutsche Wohnen, a real estate giant which is part of the initiative’s name, owns more than 160,000 apartments, most of them in Berlin.

At the rally at Potsdamer Platz, speakers said companies of that kind made lots of profits with rising rents. This was unacceptable, especially in the Corona crisis. Twelve percent of all apartments in Berlin needed to be made affordable, and the gentrification in many parts of Berlin had to end now. The organizers also said they did not want Corona deniers to join the protest. Hundreds of conspiracy theorists are in town right now, even though their rallies were banned by the Berlin authorities.