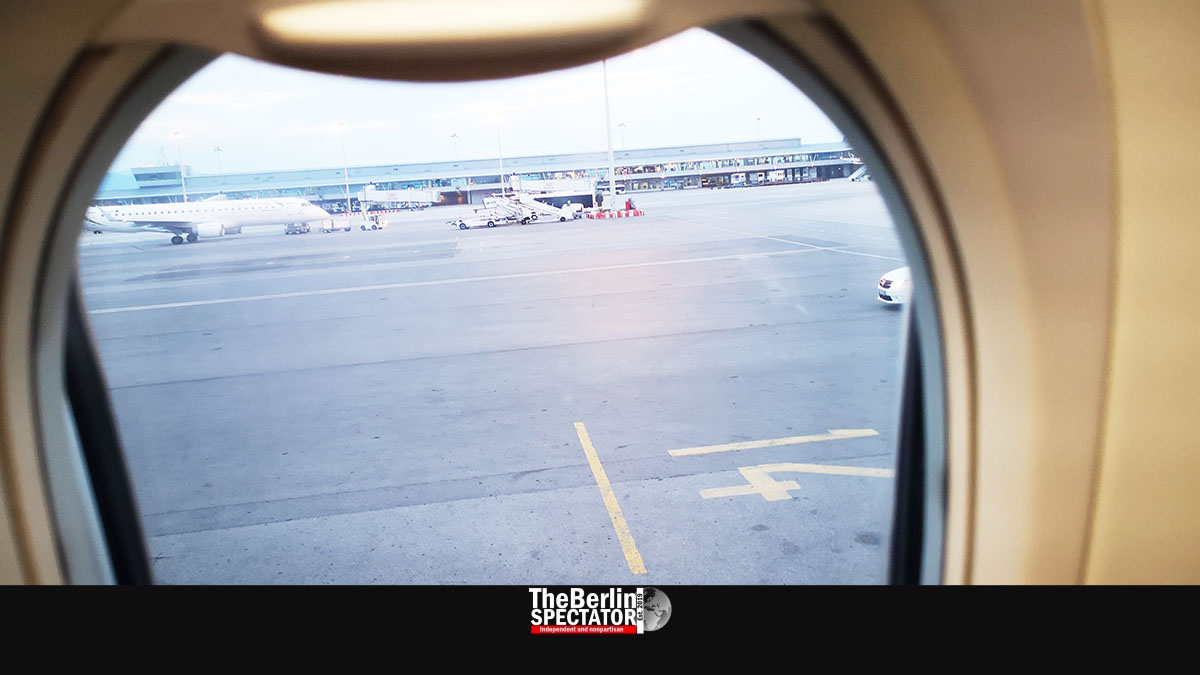 Germany’s Chancellor Angela Merkel and the European Commission’s President Ursula von der Leyen condemned the regime in Minsk for forcing a Ryanair passenger jet to land and arresting at least one of its passengers. They say the incident needs to have serious consequences for President Lukashenko. The E.U. just decided to go for new sanctions.

Berlin, May 24th, 2021. Update: May 25th, 2021, 7:17 a.m. CEDT (The Berlin Spectator) — Hours after the Belarussian regime forced a Boeing 737 owned by Ryanair to Land in Minsk and had dissident Roman Protasevich arrested, Germany condemned the incident. Angela Merkel demanded his immediate release, and that of his partner. She criticized what she called “unprecedented actions” by the Belarussian authorities. The Chancellor said the Ryanair plane had been forced to land. Any other explanations were “absolutely not credible”.

Foreign Minister Heiko Maas called the incident a “grave intrusion into air traffic”. According to him, Germany is in close contact with the European Union partners affected by the incident. He also stated the European Council needed to deal with the incident at its meeting. In any case, Belarus needed to release Roman Protasevich and his life partner now. On Monday afternoon, Maas added the explanations about the incident that had come in from Minsk were “odd and not credible”. He said the Belarussian Ambassador to Germany had been summoned to come to the Ministry of Foreign Affairs in the evening. Maas stressed the incident could not be without consequences.

Norbert Röttgen, the chairman of the Foreign Affairs Committee at the Berlin Bundestag, went even further. He reacted by accusing dictator Alexander Lukashenko of being responsible of an aircraft hijacking. The passengers and the crew of the Ryanair jet had been “put in severe danger.” Röttgen and several of his colleagues, the chairpersons of Foreign Affairs Committees in Czechia, Ireland, Latvia, Lithuania, Poland, the United Kingdom and the United States of America, released a declaration on the matter.

“We […] condemn unequivocally the threat of violence used against a civilian aircraft in the skies over Belarus”, the declaration read. “Using fighter aircraft to intercept a civilian Ryanair flight is an act of piracy on a route between two NATO and E.U. countries”, it continued. Mentioning NATO was supposed to put even more pressure on the regime in Minsk. The act was “a reminder of the illegitimacy of the administration claiming authority in Minsk.”

“We call for an immediate inquiry to be held by the International Civil Aviation Organization (ICAO) into this clear violation of free transit between states and the threats to the aircraft”, the declaration continued. “Until ICAO has reported, we call for Belarus to be suspended from the organization and a ban on all overflight of Belarus including flights to and from the country. It is clear that the current administration in Minsk has no respect for the safety of our citizens and cannot be trusted to defend their rights. This act of state terror and kidnapping is a threat to all those who travel in Europe and beyond. It cannot be allowed to stand.”

‘Tyranny has No Place in Europe’

The chairpersons of the Foreign Affairs Committees from the countries mentioned also demanded sanctions on the Lukashenko regime. They also want to “suspend their ability to use Interpol and other international organizations to further attack democracy in Europe”. Furthermore, they called for free elections to be held in Belarus under the supervision of the OSCE and an “immediate and unconditional release” of Roman Protasevich. “Tyranny has no place in Belarus or Europe”, the strong statement reads.

Ursula von der Leyen, the German President of the European Commission, said it was “utterly unacceptable” to force a Ryanair flight to land in Minsk. On Monday night, the European Council initiated harsh sanctions on Belarus. Belarussian airlines will not be allowed to use the European Union’s airspace anymore, or to take off or land at its airports. In addition, the list of Belarussian companies and individuals that are banned from entering the E.U. is being extended. Investments for Belarus, with a volume of 3 billion Euro, will be frozen. This means dictator Lukashenko’s latest stunt and the arrests will turn out to be rather expensive.

Ryanair flight no. FR4978 had been on its way from Athens to Vilnius when the Belarussian regime forced it to land in Minsk by threating to shoot it down on Sunday. A Mig fighter accompanied it to Minsk Airport, even though it had already been closer to Vilnius than to the Belarussian capital. The pretext was an alleged bomb threat on board. By now, the flight has continued on to Vilnius, but without Protasevich, his girlfriend and at least four more passengers of Belarussian and Russian descent, as German media reported.