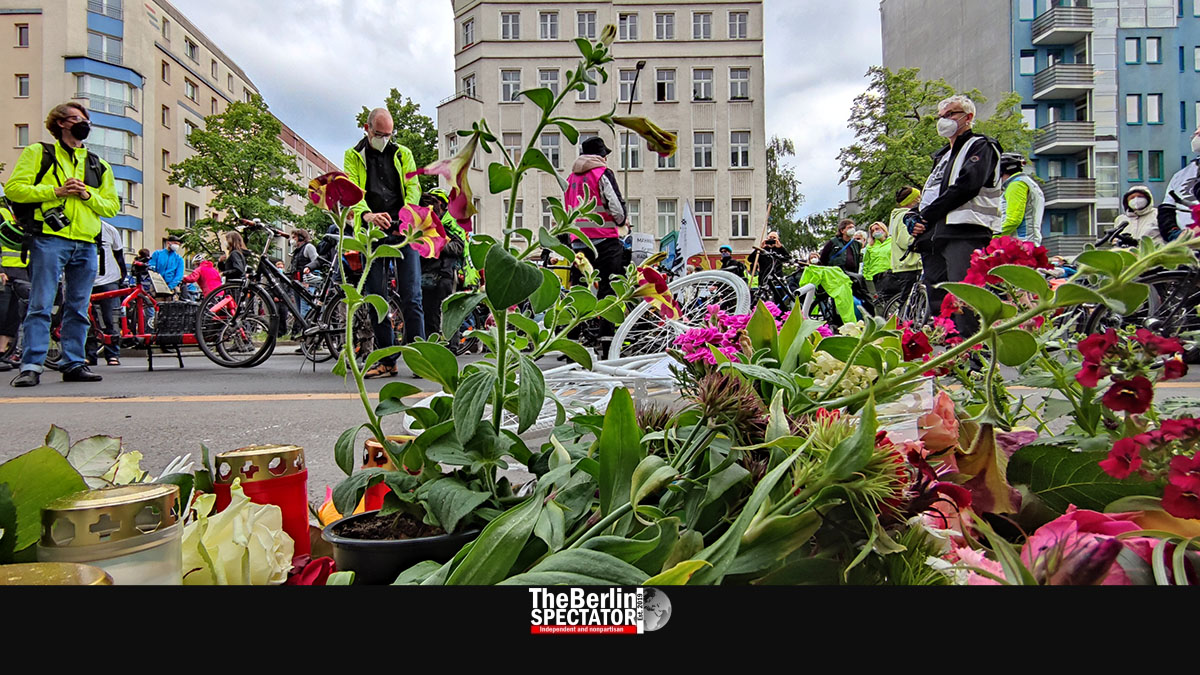 In Berlin’s Friedrichshain borough, some 300 people commemorated a 37-year-old woman who was killed in an accident. The cyclist tried to bypass a van that was parked on a bike lane when she was hit by a truck.

Berlin, May 28th, 2021. Update: May 29th, 2021, 12:15 p.m. (The Berlin Spectator) — For the third time this year, Berliners mourned a cyclist who became the victim of a freak accident. This time, it happened in Frankfurter Allee, a main street in the German capital’s Friedrichshain district. On Friday, the The German Cyclists Association (ADFC) placed a white ‘ghost bicycle’ at the scene of the accident, as they always do when a cyclist dies on the street. It will stay there for a while to show people where the deadly accident happened.

The victim had followed a bike lane on the sidewalk as she was riding west. In front of a supermarket, the bike lane continues on the street. It is marked by a yellow line. The lady intended to bypass a money transporter that was parked right on the bike lane. At that moment, she was hit by a huge truck and killed. It is unclear whether she looked over her shoulder to see whether there was traffic in her direction just before the accident or not, or for what reason the truck driver did not react on time.

An investigation is ongoing. The victim’s bicycle and the truck were confiscated by the police. In many cases, cyclists die in right-turn accidents. They intend to continue straight ahead while a truck makes a right turn. When cyclists are in the blind spot, there is no way the driver can see them. Special sensors can prevent this kind of accident, but not all big trucks are equipped that way yet. Cyclists should stay away from intersections when big trucks are present, no matter who has the right of way. Especially when any trucks are preparing for right turns, this can save lives.

The Berliners who came to Frankfurter Allee this evening observed a few minutes of silence for the 37-year-old lady who lost her life on Thursday. For the organization Changing Cities, Dirk von Schneidemesser said at the commemoration event it was important that everyone could reach their destination safely, no matter where they were going, how or why. “If we continue to accept a city in which motorized traffic is more important than human lives, we have failed”, von Schneidemesser said.

Changing Cities, an NGO that works for climate protection and traffic safety, has been demanding more space, room and safety for cyclists and pedestrians for a long time. This terrible collision showed once again that a bike lane marked by a line painted on the street did not qualify as a safe infrastructure for cyclists, Ragnhild Sørensen stated for the organization. It was life-threatening.

The Berlin Senate is working on having safe bike lanes installed in several parts of the city. For instance, Hermannstrasse, an infamous and chaotic street in Berlin’s Neukölln district, will get one soon. On some bike lanes, cyclists are being protected by bollards. According to critics, the changes are not happening fast enough. Last year, 19 cyclists died on the streets of Berlin. Two of them were pushing their bicycle when they were hit, which is why 17 of these accidents appear as bicycle accidents in the police statistics.

This year, four cyclists were killed in Berlin, so far. A 38-year-old woman wo was hit by a concrete mixer truck in Berlin’s Prenzlauer Berg neighborhood on May 14th died of her injuries yesterday, according to the The Berlin Police Department.