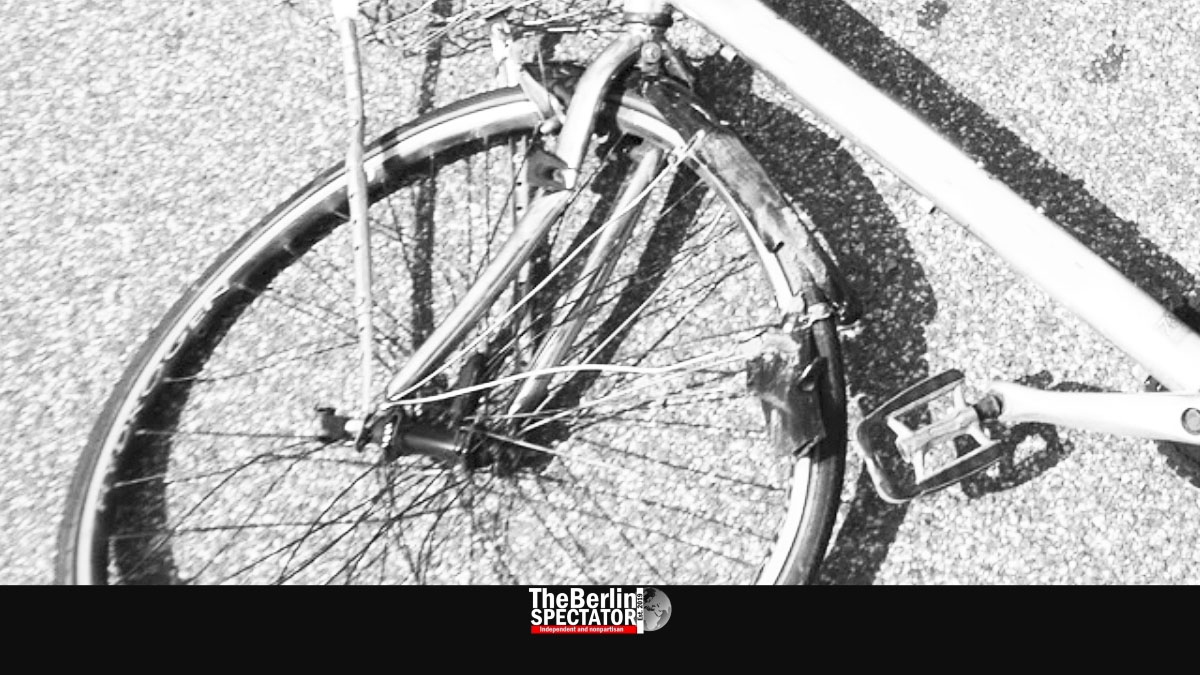 In Berlin, a cyclist died at the scene of an accident on Thursday. Since it happened, another woman was injured badly when she was hit by a car. So far, eleven people have died in accidents on the streets of Berlin this year.

Berlin, May 28th, 2021. Update: 12:05 p.m. CEDT (The Berlin Spectator) — When cyclists die in Berlin, truck drivers are responsible in many cases. Several right-turn accidents have happened this this year began. Two of those were deadly. The typical situation involves a heavy truck which makes a right turn. Its driver cannot see the cyclist next to it, on its right. In some cases, the cyclist underestimates the danger he or she is in at that moment. Sensors most new trucks are equipped with can prevent some of these terrible accidents from happening. But the two accidents involving cyclists that happened in the past 24 hours were different.

On Thursday at 9:30 p.m., a 31-year-old lady on a bicycle was taking meals to customers of a delivery service. In Berlin’s Moabit borough, she turned into the street ‘Alt-Moabit’ from Werftstrasse. At this moment, she was hit by a car and sustained bad injuries. Medics took her to a hospital. The police confiscated the motorist’s driver’s license and initiated an investigation. He is suspected of causing physical injury resulting from negligence.

Another accident that happened several hours earlier, at 12:20 p.m., was far worse. A 37-year-old woman was killed on Frankfurter Allee, one of Berlin’s main traffic arteries. According to witnesses, the victim was moving along a so-called popup bike lane on the street which does not have any physical separation from the motor vehicles. Because a money transporter van was parked on the bike lane, she intended to bypass it. The moment she tried to ride around the van, she was hit by a large truck from behind. The police confiscated the vehicle and the bike.

According to the Berlin Fire Brigade, which also runs many ambulances, three people who witnessed the accident suffered shocks and needed to be treated. The investigation on site took many hours during which Frankfurter Allee was closed to traffic around the scene of the accident. The victim is the eleventh person to die on the streets of Berlin this year, and the third cyclist. The first two died on March 18th and 23rd in right-turn accidents. Compared to last year, the number of deaths in accidents involving bicycles is low. On the other hand, each victim is one too many.

This evening, the NGOs ADFC and Changing Cities will commemorate yesterday’s accident victim at Frankfurter Allee. As they always do when cyclists die, they will place a white bicycle there, in memory of the victim. Both organizations have demanded more safety for cyclists in Berlin for a long time. They want to get big trucks without special sensors out of the city.