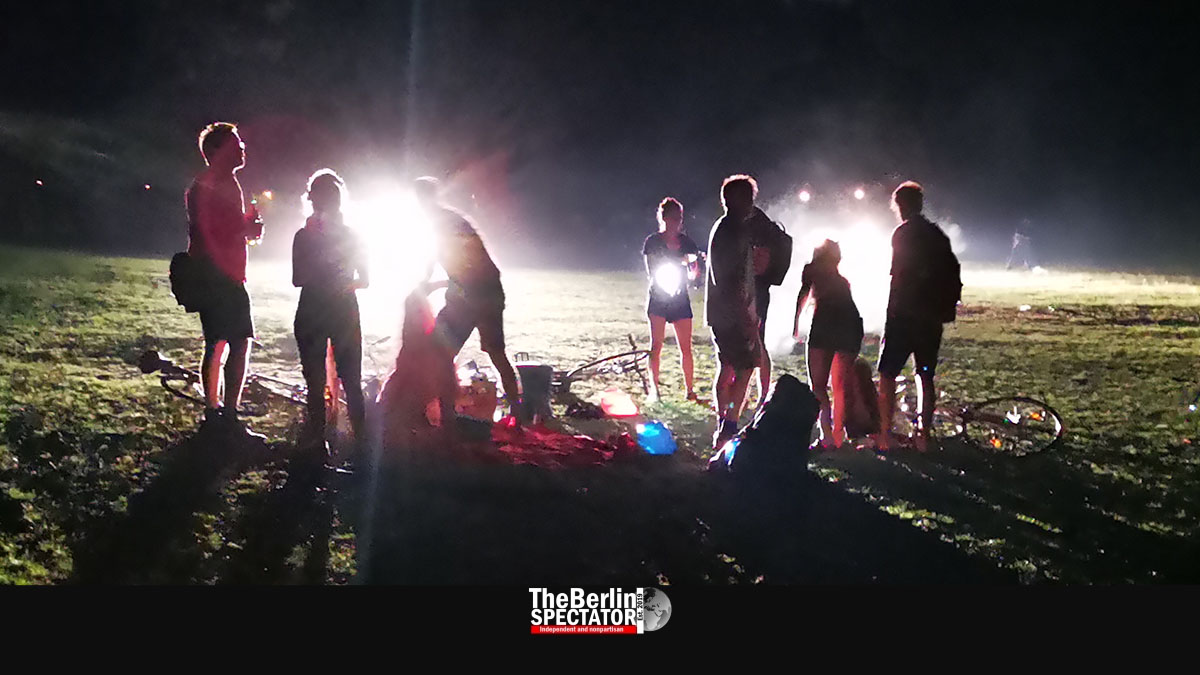 Germany is registering a return of a phenomenon that first appeared in 2020. Party people gather in parks or city centers to drink and dance. In several cities, the police have been busy dealing with the problem in the past 36 hours.

Berlin, May 30th, 2021. Update: 6:45 p.m. CEDT (The Berlin Spectator) — Lucy Lameck Strasse belongs to Berlin’s large Neukölln district. Last night at 3:00 a.m., intoxicated party people who were on their way home from parties in neighboring Hasenheide park woke up the entire neighborhood by screaming, laughing and playing loud music. The mob also knocked down construction fences, which caused a lot of noise. Not only did they jeopardize everyone’s health, by clearly ignoring all Corona rules, but they also did not seem to care about anything, let alone people’s sleep. Annoyed neighbors had called the police because of the noise in the park. When the officers arrived, some were attacked by individuals who threw bottles at them. Several stereo systems were confiscated.

It was not the first time party people caused problems. The night before, the police had already ended illegal parties at Hasenheide. The same applied countless times last year, from May to September of 2020. Back then, and probably now as well, the participants of those park parties used bushes as bathrooms and threw their trash all over the place. The police would chase them away, but they kept on reappearing.

In Hamburg, this kind of dangerous ignorance was registered at the hip Schanzenviertel neighborhood last night. According to German-language media, some 1,300 party people gathered at a park located there, played loud music, drank and ignored the Corona restrictions. The Hamburg Police Department ended the party and ordered people to disperse. Instead of going home and acknowledging their mistake, they tried to continue to party all over the streets. All in all, up to 15,000 persons had participated in outdoor parties, the police said.

Some of them attacked police officers, again by throwing bottles at them. Arrests were made. Several police officers were injured. Because of the behavior of many party people, the restaurants and pubs in this Hamburg neighborhood, which had just reopened after half a year of lockdowns, were ordered to close an hour early, at 11:00 p.m. because of the chaos the illegal parties were creating.

The situation was similar in Stuttgart, where some 500 young party people gathered at Schlossplatz square, where they consumed alcohol, listened to loud music and ignored the Corona rules. Here as well, the police ordered them to leave the location. According to reports from Stuttgart, officers were attacked and injured. Several persons were arrested. In some cases, the police used irritant spray.

Back in Berlin, the police were quite busy with exactly the same issue in broad daylight too. On Saturday, they sent away several hundred persons who were gathering at Treptower Park, without wearing masks or keeping their distance. Last night, there were more incidents of this kind at other Berlin parks. Lots of police sirens were heard in the early morning. On Sunday, the Berlin Police Department said some 4,000 people had taken part in illegal parties in the capital.

In the fall of 2020, those parties at parks likely contributed to the increasing number of Corona infections. In September, the weather finally resolved the problem. Now, the illegal gatherings are endangering everyone again. At this stage, the infection numbers are falling because the strict rules that had applied since late last year broke the third Coronavirus wave. Germany is opening up cautiously right now. If those party people continue breaking the Corona rules, the infection numbers could increase again. In that case, the reopening steps might have to be retracted.