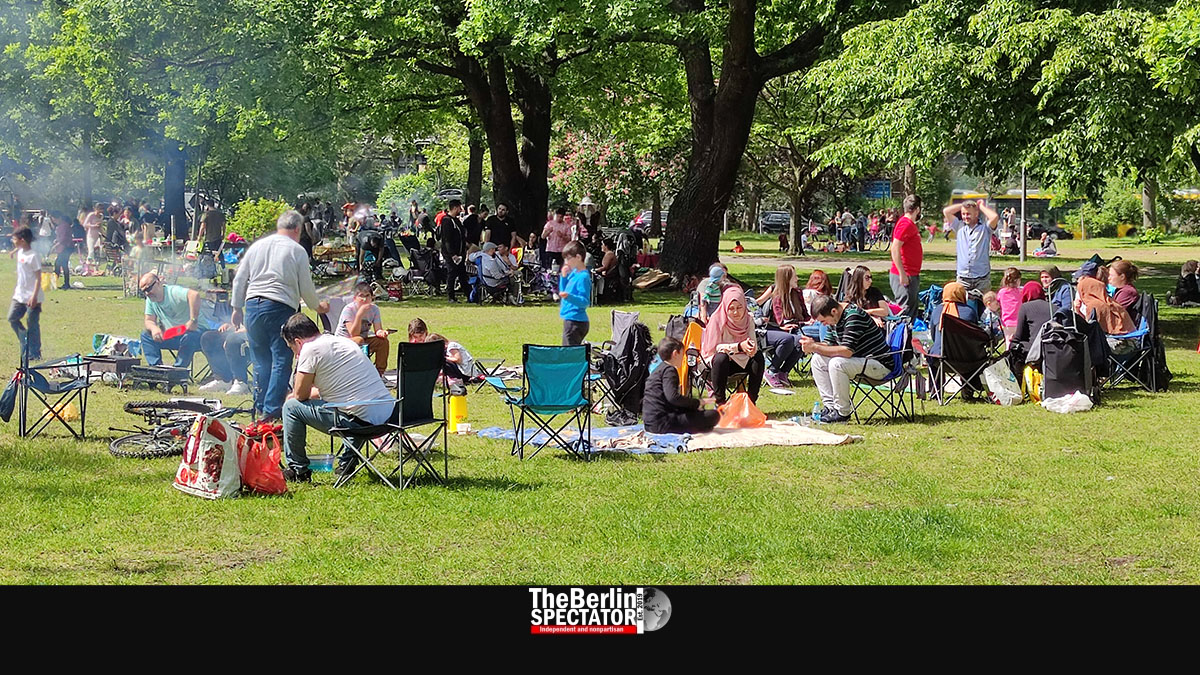 In Berlin, nice weather gave people the opportunity to enjoy this past weekend by engaging in outdoor activities. At the main sightseeing spots, tourists were spotted. Restaurants and cafés were well-frequented.

Berlin, May 31st, 2021 (The Berlin Spectator) — The Sun finally made Berliners believe in this year’s spring. Some three weeks before the first day of summer, thousands invaded the city’s nicest parks. At Hasenheide, a rather large park in Neukölln, couples and families spread out blankets on the grass and enjoyed life. Some young men did rope dancing on cords they had fixed to trees. Dogs chased each other in the dog run area. There was something for everyone.

Sightseeing on the Water and Ashore

At Blücherplatz in Kreuzberg, which is both a park and a square, mostly Berliners with Turkish roots barbecued for the first time in months. Large families enjoyed their freshly grilled meat and salads. Another half mile north, at Checkpoint Charlie, actual tourists were spotted. Pedicab drivers brought them to the former crossing point between West Berlin and the GDR. A couple from the Middle East patiently waited until a family from the Far East was done shooting selfies, before it was finally their turn. The pedicab drivers confirmed these tourists were “absolutely real”, after months of lockdowns, during which hardly any tourists came to Berlin, let alone visitors from abroad.

Some of those sightseeing buses were back on the German capital’s streets. None of them were full, but owners of hotels, restaurants and other businesses are hoping they will be soon. Sightseeing boats were moving up and down the river Spree, with a few dozen tourists on each. Berlin’s Wannsee lake and Landwehr Canal were conquered by people on canoes and inflatable boats. Four hundred and eighty-eight days after the first Coronavirus infection was confirmed in Germany, the Berliners definitely needed an almost normal spring weekend like the one that ended yesterday.

Maybe it was a little too ‘normal’. Thousands of persons celebrated illegal parties at Berlin’s parks on Friday and Saturday night, without adhering to the Corona rules, and got in trouble with the police (see separate article on this issue). As always, there were countless protests as well. On Leipziger Strasse, another rally against cars in the city took place. At Brandenburg Gate, Nicaraguan expats protested against corruption in President Ortega’s government and the incarceration of political prisoners in their home country.

Berliners and the first tourists who returned to Berlin quickly figured out how to go to restaurants or cafés these days. First, they located one of those “free Corona test centers” that popped up like mushrooms all over the city. Then they had ‘quick tests’ done. While they picked the restaurant of their choice, they would receive e-mails with their (mostly negative) test results which are the condition for being allowed to sit down at an outdoor table. Vaccinated persons just need to show their vaccination certificates.

Restrictions to be Eased

More ‘normality’ is on its way. The Berlin Senate might lift or at least ease more Corona restrictions tomorrow, because of the slumping infection numbers. And the solar system’s star, namely the Sun, will show itself more. After a few rainy days, it will get warmer starting on Thursday, according to meteorologists.