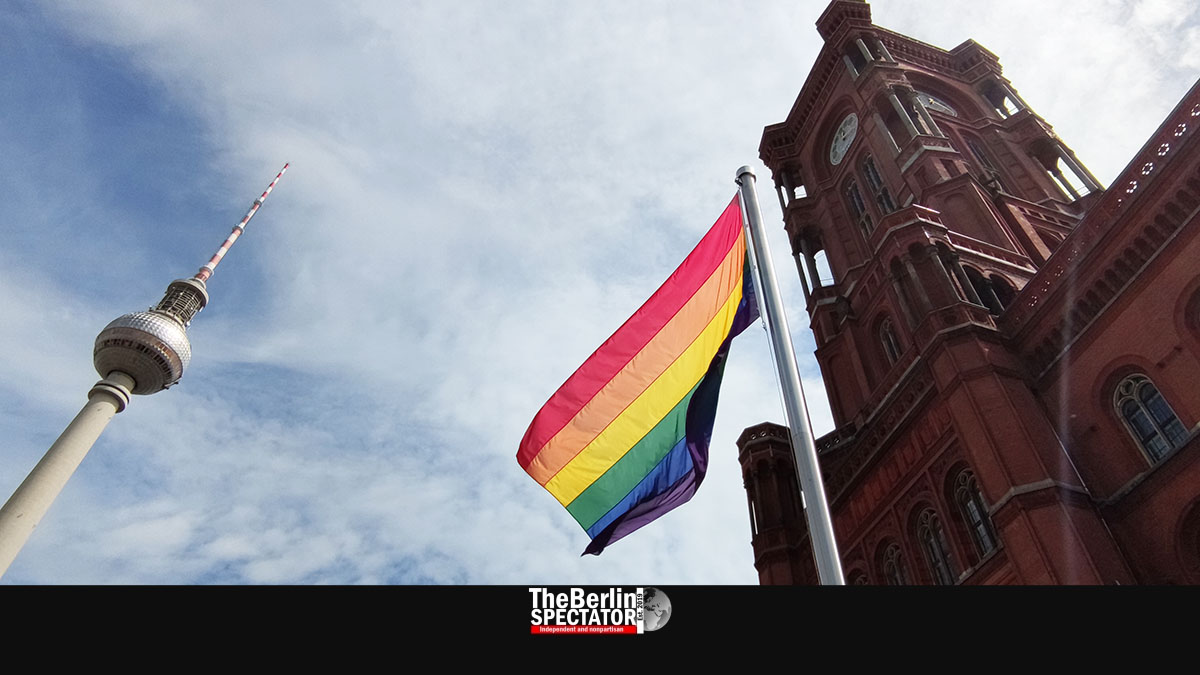 In Berlin, Governing Mayor Michael Müller and Christopher Schreiber of the Association of Lesbians and Gays hoisted the rainbow flag at Red City Hall today. By doing so, they marked the beginning of the Pride Summer which will include many events for the LGBTI community and its supporters.

Berlin, June 1st, 2021 (The Berlin Spectator) — In 2020, many big LGBTI events had to be cancelled because of the Corona pandemic. This year, the pride season is supposed to be very different again. By raising rainbow flags at Red City Hall, Governing Mayor Michael Müller, Christopher Schreiber of the Association of Lesbians and Gays Berlin Brandenburg (LSVD) and the transport provider BVG’s CEO Eva Kreienkamp officially welcomed what is known as the Pride Summer.

Several Senators were present and some of them helped hoisting a total of four rainbow flags Justice Senator Dirk Behrend was there, Interior Senator Andreas Geisel, Commerce Senator Ramona Pop, Health Senator Dilek Kalayci, Education Senator Sandra Scheeres and others. They made clear that Berlin is a diverse city that supports its minorities, including lesbians and gays, and opposes homophobia as well as other forms of hatred.

The Pride Summer usually commemorates the Stonewall Incident in New York City, which happened 52 years ago, in late June of 1969. This year is no exception. Back then, the NYPD brutally raided the bar ‘Stonewall Inn’, which was frequented by members of the LGBTI community. The raid led to demonstrations and more clashes between protesters and the police. After the Stonewall Incident, the global movement for LGBTI rights developed.

Because of the Coronavirus, which is still spreading, Christopher Street Day in Berlin, on July 24th, 2021, will be a rally this year, rather than a parade. Members of the LGBTI community took part in discussing this year’s motto for the big protest. So far, it has not been announced. But the organizers said they wanted to fight against the ramifications of the pandemic for LGBTI folks. There will also be a CSD rally on June 26th, during which the participants move towards the city center from different starting points.

On July 23rd, both an interfaith LGBTI prayer service and the Dyke March for lesbians are scheduled to take place in Berlin. In addition, there will be ‘Respect Gaymes’ on August 21st and a ‘CSD on the River Spree’ on September 23rd. The pride season is supposed to end with the Lesbian Gay City Fest on October 2nd and 3rd, 2021.

For Diversity and Equality

At Red City Hall, Governing Mayor Müller said he was glad LGBTI events could take place again this year. “By hoisting the rainbow flag in front of Red City Hall, we take a stand for diversity, openness and equality, and against discrimination, homophobia and transphobia”, Müller stated. The BVG was going to raise a total of 18 rainbow flags on its office buildings and the Nollendorfplatz ‘U-Bahn’ train station. More flags will be hoisted at several Senate Administration and district authority buildings.