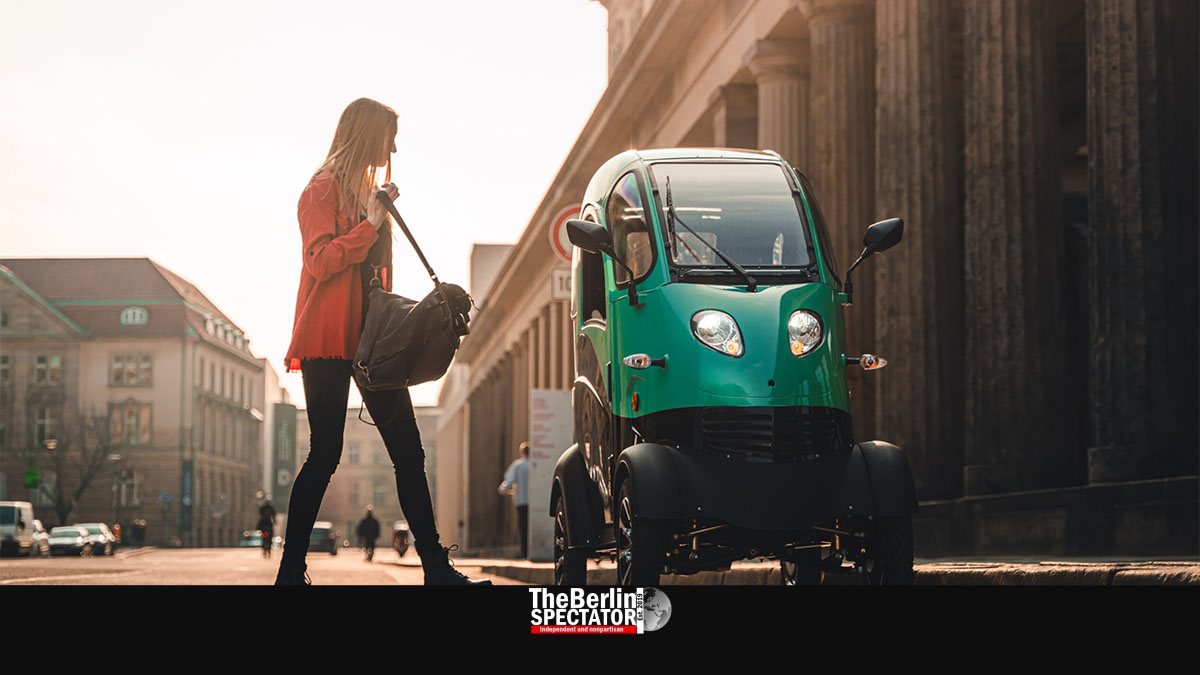 A Swiss brand called Enuu is invading Berlin with electric rental vehicles that look like UFOs. They are weirdly-shaped mopeds. But, like cars, they have four wheels and a cabin. The best part? They can be tried for free.

Berlin, June 2nd, 2021. Update: 11:15 a.m. CEDT (The Berlin Spectator) — Yet another kind of rental vehicle is just what Berlin needed on its sidewalks, right? There are regular bicycles anyone can rent by using an app. But who wants those when they can easily rent electric bikes or mopeds instead? Or how about e-scooters? Those can be found all over Berlin too. Now, Enuu is adding vehicles that actually look like UFOs. Except they do not fly. Or do they?

Enuu, a Swiss company, calls its vehicles E-Pods. They weigh 175 kilos (386 pounds) and are propelled by electric motors with 800 watts. A few days ago, Enuu started placing those E-Pods in Berlin’s city center, including the districts Mitte, Friedrichshain-Kreuzberg and Neukölln. In order to rent them, people need to download the Enuu app, for instance at the Google Play Store, locate an E-Pod with loaded batteries, reserve and unlock it.

A credit card is required. So is a class M driver’s license (or one with the old classes 1 or 3). How and whether foreign driver’s licenses are appropriate here is unclear. Ready for the best part? Until June 8th, renting an E-Pod for up to an hour is free, once per day and person. Fifteen minutes more are 2.79 Euro. Two hours more are 10 Euro and four hours 16 Euro. For an entire day, Enuu charges 50 Euro.

The Berlin Perspective: The Obvious Vote and what Really…

From A to B

Compared to bicycles, mopeds and horses, Enuu’s vehicles have advantages: They feature a body, doors and a roof, meaning they can be used in the rain, and whoever rents them can even bring along some luggage. According to the company, they are also safer in case of accidents. Also, they protect its drivers from “street crime”, Enuu says. They say their vehicles were a good alternative to public transport. Well, of course they are far more convenient, but also more expensive.

By law, E-Pods have a maximum speed of 28 km/h (17 mph) and a range of up to 40 kilometers (25 miles) until they run out of juice. This aspect makes them good vehicles for going from A to B within the city. For little trips to Brandenburg, their range may not be sufficient. In Germany, E-Pods need to be driven on the street. As of yesterday, there were 50 E-Pods in Berlin. Their number will likely increase quickly.

Enuu was founded by Yoann Loetscher and Luca Placi from Switzerland. Both of them are automotive engineers. While Placi worked for a German car manufacturer that starts with a “P” and ends with “orsche”, Loetscher was part of a company in Stuttgart which makes cars with stars on their hoods. In July of 2017, they completed their first E-Pod prototype. In November of 2018, they launched Enuu in Biel-Bienne, and by the summer of 2019, they had conquered Zurich. Their launch in Berlin is yet another giant leap for mankind. Amen.