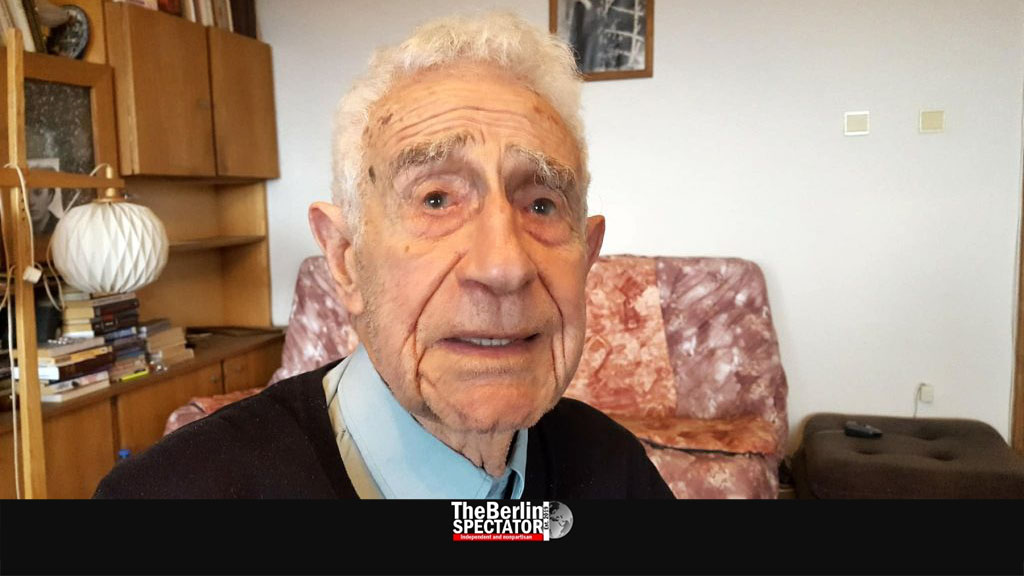 Victor Baruch, one of the 50,000 Bulgarian Jews who were saved from the Nazis, and the only Bulgarian to cover the Eichmann trial in Jerusalem, celebrates his 100th birthday today. Imanuel Marcus met him in Sofia when he was 97.

Sofia, July 3rd, 2018. Update: Berlin, June 2nd, 2021 (The Berlin Spectator) — When your birth year is 1921, some people might have issues believing it. At age 97, in 2018, Victor Baruch, an author from Sofia, seems more like 67. He says he had recently signed some document at the German Embassy, located just a few blocks away from his apartment block.

“The lady there said: ‘I saw your birth date. How do you do it?’ I just said it was God’s will. She replied: ‘Well, but you must be helping God somehow.’”

Victor Baruch welcomes his guests into his spacious flat with wooden floors and a big wall unit full of books, including his own novels. He seems to be the kindest, most polite and most modest person on Earth. Baruch lives alone and rejected his great-granddaughter’s offer to move in with her, probably because he thought he might be a burden to her family. A laptop computer is waiting for input on the living room table.

Baruch offers nice smelling coffee from a Thermos bottle and chocolates, saying he had been living in that nice place on the 17th floor for thirty years. The view from his enormous balcony is amazing. So is the insight he gives his interviewers into history and his long life.

When he was 22 years old, he went to a protest rally in Sofia, in May of 1943. The Bulgarian Jews had just received orders to evacuate their apartments and houses within three days. They were told which freight train they had to board at what time, and that their luggage could not exceed 10 kilos per person.

Victor Baruch remembers that day as if it had been yesterday. “Those orders sent out to the Jews did not say that they were going to be sent to death camps. But they knew.”

According to him, there are different opinions regarding the question whether the protest that day in May was organized or spontaneous. “As far as I remember, it was staged spontaneously, by Jews. Most men were at labor camps all over Bulgaria. The women did not know what to do in this situation. They first gathered at the synagogue and then started protesting.”

At that moment, the Jews from Bulgaria proper did not know that they were going to be saved. Thanks to courageous Bulgarians, including Christian Orthodox priests, there were no deportations to Nazi death camps. While 11,343 Jews from Thrace and Macedonia, both governed by Bulgaria at the time, were deported and murdered, 50,000 Jews were saved.

Baruch’s father had died seven years before these events took place. With their mother, Victor Baruch and his two older brothers, were sent to Pazardzhik, mostly to labor camps. Since he himself was not fit enough for those, he was being taken to “some kind of a concentration camp”.

His mother died before the war was over. The three brothers eventually met back in Sofia. One became a communist party functionary, the second one an employee in a store, and Victor Baruch volunteered for the Fatherland Front, while writing for a newspaper. The Front was a resistance movement for communists and social democrats.

Many years later, good news were coming in from Jerusalem. Adolf Eichmann, Nazi Germany’s architect and planner of the Holocaust, was in Israeli custody. The war criminal had managed to hide in Buenos Aires until 1960 under the name Ricardo Clement, when a Mossad team apprehended him and took him to Israel, in a stunt which was turned into several movies.

‘You Did Not Catch Me’

“It was a feeling of relief and joy”, Victor Baruch says, 57 years later, in his Sofia apartment. “We, the Bulgarian Jews, were so glad he would have to stand trial for what he did, and finally face justice. Back then, I told one of my colleagues at the Union of Bulgarian Writers: ‘Noah, I really want to see this guy’s face.’ And they sent me to cover it.” He became the only Bulgarian reporter at the trial.

Baruch saw the man who had planned and executed the Holocaust face to face: “When I saw Eichmann, I saw the man I was saved from, because he was the boss of SS Hauptsturmführer Theodor Dannecker, who came to Sofia in 1943.” Dannecker and the notorious Bulgarian Nazi Alexander Belev were the ones who planned the deportation of the Jews from Bulgaria proper, which never happened.

“So, I entered the trial room, saw Eichmann sitting in this glass box and thought to myself: ‘You fool. You didn’t catch me. I escaped.’” Victor Baruch takes another sip from his Thermos coffee.

‘We Should Not be Quiet’

“Eichmann had an armada of German lawyers. He was always appropriately dressed, seemed very calm and looked like a person, and this is what he claimed all the time, who was just following orders. His story was actually interesting.”

Fifty-six years after the trial and the only capital punishment verdict ever executed in Israel, in the truest sense of the word, antisemitism is on the rise all over the place. This includes the Bulgarian capital of Sofia, where Bulgarian and German Nazis still march through the city in honor of Hristo Lukov, another notorious Nazi, where Swastikas are being sprayed on walls, where ‘Mein Kampf’ is being offered at the book market, and where radical right-wingers were part of the government, until recently.

“We need to continue fighting. We should not be quiet”, says Victor Baruch. “We should be vocal and stage demonstrations. Petitions and declarations should be written. Those conscious nationalists, whose ideas very much align with the Nazi ideas, pose one of the dangers we are facing.”

In 2018, Victor Baruch, one of the few Bulgarian Jews who did not make Aliyah (move to Israel) in 1948, still writes, including a booklet about the Eichmann trial. “I keep busy. I have this computer and write a lot.” He also has his great-granddaughter. And he does a lot of thinking: “I do think about death. It’s inevitable. But I try to keep it at bay.”