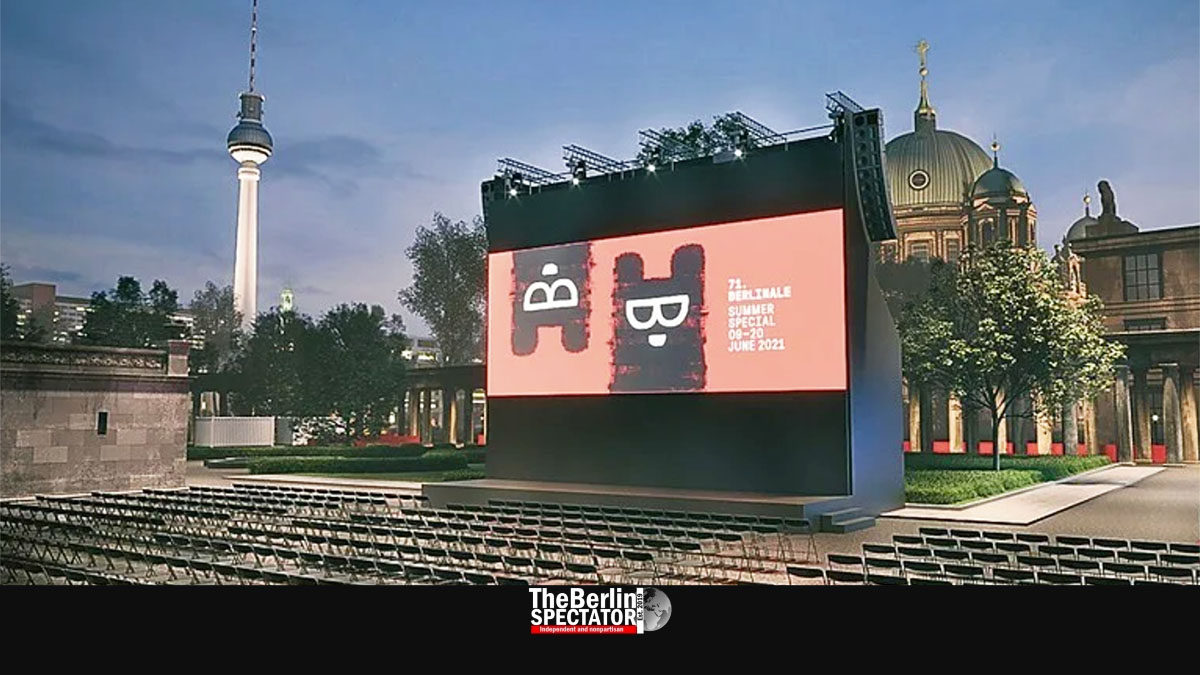 Because of the improving Corona situation in Berlin, and the easing of restrictions, the Berlinale film fest can go ahead and sell more tickets than anticipated. Some 60,000 of them are available, but they will sell out quickly. The sales start this morning.

Berlin, June 3rd, 2021 (The Berlin Spectator) — Berlinale tickets are the hottest items in town today. They are going on sale this morning. After sixteen months of Corona, which felt like 16 years, and a 6-month lockdown, which felt like six centuries, many Berliners may be very eager to experience good motion pictures in a great atmosphere. It might sound incredible, but there is an excellent opportunity for an overdose of culture. The time is now.

The Berlinale spared no expense. It actually set up its own open air cinema on Berlin’s Museum Island. A total of sixteen open air movie theaters will be taking part in the Corona version of Germany’s most important film festival. In 2020, the Berlinale was the last big cultural event that was allowed to take place, just before Corona turned Berlin, Germany and most of the world into a mess. Now it is the first big one.

This year, the festival does look different. If there are red carpets at all, Hollywood personalities or other international film heroes will not be the ones who walk up and down on them. Matt Damon will not give anyone a bright smile in Berlin. Neither Jeremy Irons nor Helen Mirren are here. Well, there is an advantage: Instead on focusing on stardom and fancy clothing brands, film enthusiasts can concentrate on the screened films and on finally staring at big screens again together. Yes, there will be masks and distancing, but there is nothing better than watching great motion pictures under the stars, right?

Four out of Many

Starting on Wednesday, June 9th, 2021, truly interesting films will be screened, in English or with English subtitles. They include ‘Azor’, a Swiss-French-Argentinian co-production about a Swiss banker who travels to Argentina with his wife during the military dictatorship. They intend to find his business partner who mysteriously disappeared. The American movie ‘The Inheritance’ is about life in a Philadelphia commune. Marxism, cleaning rosters, the MOVE organization, Jazz, post-colonial theory, amusing anecdotes and Godard’s ‘La Chinoise’ are what its members are dealing with. As the private intermeshes with the political, a crash course in Black experience emerges.

‘Ballad of a White Cow’ seems to be an intriguing French-Iranian film about a woman named Mina. After her husband’s execution, she learns that the death penalty was unjustly imposed. She is offered compensation but wants to meet the judges who are responsible. Meanwhile, a new man, Reza, enters her life. Or how about ‘The Mauritanian’, a British motion picture? A defense attorney, her associate and a military prosecutor uncover a conspiracy while investigating the case of a suspected 9/11 terrorist. This political thriller is inspired by the diary that the detainee wrote at Guantánamo Bay detention camp.

How to Purchase Tickets

These are just four randomly chosen motion pictures. Far more, from many countries, will be shown. The Berlinale program also includes documentaries. Today, on Wednesday, June 3rd, 2021, at 10:00 a.m., the ticket sale begins. Because distancing remains an important aspect, almost all 60,000 tickets will be sold online. By the way: Those movies will be screened at open air theaters, no matter what the weather looks like. Rain, sunshine, scorching heat, snow, ice, hail, tornados or tropical storms will not stop the Berlinale from happening.

This is how to purchase Berlinale tickets this year, in steps:

Under normal circumstances, in pre-Corona times, Berlinale tickets were sold three days in advance, in order to make sure people would not exaggerate with those tickets. This time, all tickets will be sold in one go. Regular ones are between 10 and 15 Euro. Some 60,000 tickets are available. Last year, there were more than five times as many.

These are Corona times. Everyone will need either a negative Corona test result certificate, less than 24 hours after the test was done, a vaccination certificate, or a document which proves the person was infected with Corona between 28 days and 6 months prior to the screening of his or her choice.

The Berlinale program, with ticket links, can be found here.