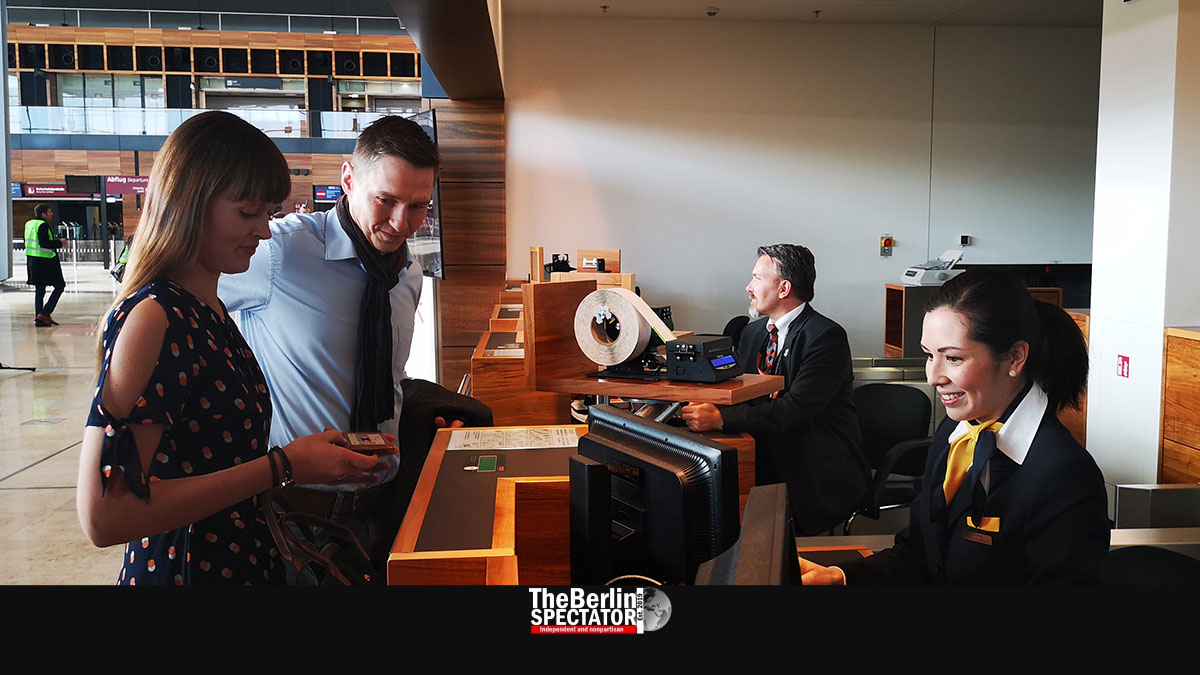 At BER Airport in Schönefeld, the situation is still far too quiet, from the perspective of the aviation industry. But the number of passengers is on the rise. In May, 362,000 of them were counted.

Berlin, June 3rd, 2021 (The Berlin Spectator) — Berlin Brandenburg Airport (BER) is back in business, at least to some extent. In early 2020, Corona had almost ended the entire passenger flight business. Because of the decreasing number of new infections in Germany and other European countries, and due to the easing of many Corona restrictions, travel in general and flights in particular are becoming more popular again now. But the situation is still far from what it was in pre-Corona times.

In May, 5,400 aircraft landed at or took off from BER Airport, 600 more than in April. In May of last year, there had been less than half this number of planes, namely 2,100 of them, at the two old airports. Another year earlier, in May of 2019, more than 26,000 aircraft were counted. Many have almost forgotten what things were like before Corona. In 2019, the world was still standing and the sky was still the limit. The 35 millionth passenger of the year was honored at Schönefeld Airport on December 20th, 2019.

Returning to numbers of this kind will take years, aviation experts believe. They do not expect things to return to what they consider normal before 2025. One thing is certain: Aviation will never be exactly the same it was before Corona. Along with the fuel taxes, ticket prices will most likely rise further. Domestic flights in Germany might be scrapped altogether. People are becoming more aware of their CO2 footprint, which might decrease the number of flights further. Besides, Corona is still a danger in many parts of the world, including in Germany, and it might be for a long time or even forever. This aspect will keep many tourists from choosing exotic holiday destinations they can only reach by plane.

BER Airport was completed with a nine-year delay in 2020. It opened in late October, when the third Corona wave was getting ready to hit. At that point, nobody needed a new airport terminal with a capacity of 28 million passengers per year. Former Schönefeld Airport, which was converted to Terminal 5 of BER Airport before the new one opened, was shut down months ago. It is being used as a vaccination center these days.

The freight business is still sort of strong. In May, 2,200 metric tons of goods were flown to Berlin, or from BER Airport to other destinations. This is only about one third less than in 2019. What passenger flights are concerned, Engelbert Lütke Daldrup, the departing CEO of FBB, the state-owned company that runs BER Airport, is cautiously optimistic. He said he expected a total of 10 million passengers for 2021. Is this wishful thinking? We will not know until January.