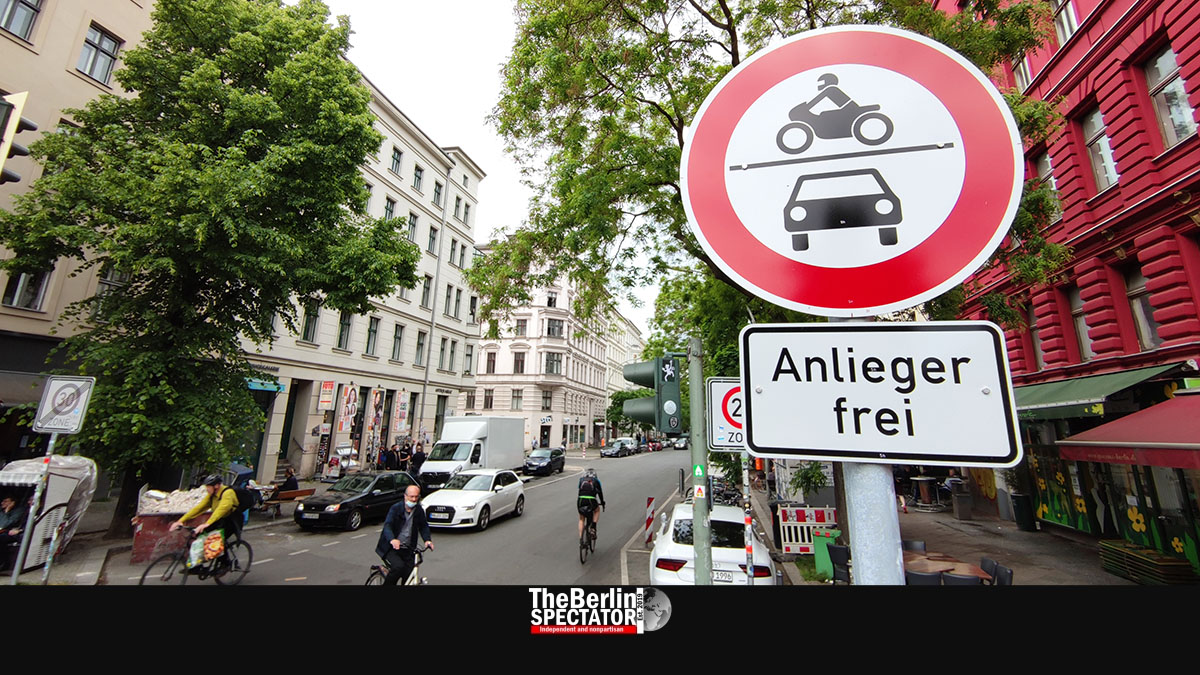 In Berlin, owning a car is politically incorrect in the eyes of some politicians and activists. Local Greens and organizations run by very determined cyclists and ecologists are fighting a 135-year-old invention called the automobile. But there are good ideas in regard to the future of traffic in Berlin too.

Berlin, June 4th, 2021 (The Berlin Spectator) — Automobiles are machines that transport people or goods. They are propelled by combustion engines which spread CO2 and other harmful gases. But more and more electric cars hit the streets. Eighty percent of all cars that move around within Berlin’s ‘S-Bahn’ train ring are supposed to vanish into thin air, disappear, no matter what propels them. This is what the movement Referendum Car-Free Berlin is working on. At this stage, the group is collecting signatures for the referendum it wants.

Throwing out most motor vehicles except for delivery vans and buses within the next few years, and letting people use their private cars for six to twelve trips per year only, which is what Referendum Car-Free Berlin insists on, is pretty radical. But the war against cars is obviously being fought in different intensities. Monika Herrmann is the Green district mayor in Berlin’s Kreuzberg borough. She has been fighting the motor vehicle for years, but chose a different approach, which is banning cars from certain streets while giving more room to pedestrians and cyclists.

Her favorite project seems to be Bergmannstrasse, a posh street with many restaurants and cafés that is being frequented by people from the neighborhood, and Berliners who cannot afford the high rents in that vicinity but still like the atmosphere. Tourists from all parts of the world used to go there as well, before they disappeared because of Corona. “The supremacy of the car is over”, Monika Herrmann said last year. Her plan is to turn a stretch of 500 meters (0.3 miles) of Bergmannstrasse into a pedestrian zone not only people will benefit from, but also insects. Seriously. “Water elements” are supposed to attract them.

Until 2025, the Bergmannstrasse project is supposed to be implemented. But Mrs. Herrmann, one of Berlin’s many car opponents, is not just going to sit there and wait. Instead, she is already slowing down and limiting traffic. Recently, she had new speed limit signs installed. Motorists who exceed 20 km/h (12.4 mph) are braking the law. The usual speed limit in traffic-calmed zones is 30 km/h. But Monika Herrmann would not be Monika Herrmann if she had not shown those mean motorists who is holding the scepter. Just yesterday, motorized traffic was banned from the stretch in question. From this moment onward, only residents may pass.

The idea to convert this restaurant zone into a pedestrian zone is actually not so bad. But the radicality with which it is being implemented annoys some people, especially after the expensive experiments the local Greens recently conducted in Bergmannstrasse. For 1 million Euro (1.2 million U.S. Dollars or 0.9 Pounds Sterling), they installed ‘parklets’, meaning they converted parking spots into little areas with installed groups of chairs and tables. After a few months, they removed them again. Some of the residents there were not exactly happy about the nightly noise the experiment created, because it invited intoxicated people to sit down and shout at each other all night long, or about the price tag.

Generally speaking, turning streets into pedestrian zones is a science, as the Friedrichstrasse example shows. Here, some business owners are not happy because less customers show up. A bike lane that runs right through the middle of the zone constitutes another problem, because the cyclists who race by sometimes clash with pedestrians, and they do not exactly contribute to the intended deceleration.

Now, the next pedestrian zone project is in the works. According to the RBB radio and TV network, part of Potsdamer Platz, one of the most famous spots in Berlin, will change. The Canadian company Brookfield Properties, which owns part of the premises around the ‘Potsdamer Platz Arkaden’ mall, intends to invest millions. Alte Potsdamer Strasse between Potsdamer Platz itself and Marlene Dietrich Square is supposed to become a pedestrian zone. Here, the conversion was planned to make the place more attractive for businesses and shoppers. As opposed to the Bergmannstrasse case, ideology is not the motivation here.

So, there are local Greens who dislike motor vehicles, businesses who want to attract more potential customers and radical car opponents. And there are organizations that have far more reasonable demands than the group Referendum Car-Free Berlin, or than individuals who keep on setting cars on fire all over Berlin almost every night. One of those is the German Cyclists Association (ADFC). They want more room for cyclists, more safe bike lanes and a proper network of the latter through the entire city. The Berlin Senate has promised all of that, but does not seem to be making too much headway.

For this Sunday, the ADFC announced a huge rally for cyclists with which the organization wants to underscore its demands for a quick implementation of the promised “traffic transition” the Senate keeps on talking about. From several spots all over Berlin, cyclists will be following sixteen fixed routes, until all of them reach Brandenburg Gate. The ADFC is hoping for up to 20,000 participants.

Berlin has 3.8 million inhabitants. Many of them need their cars, others just want to keep on using them. On the other hand, Berlin clearly is a bicycle city. Tens of thousands of cyclists who move around every day indeed need more room and more safety. If and once implemented, the Berlin Senate’s “traffic transition”, or an accelerated version of it, might be a good compromise.