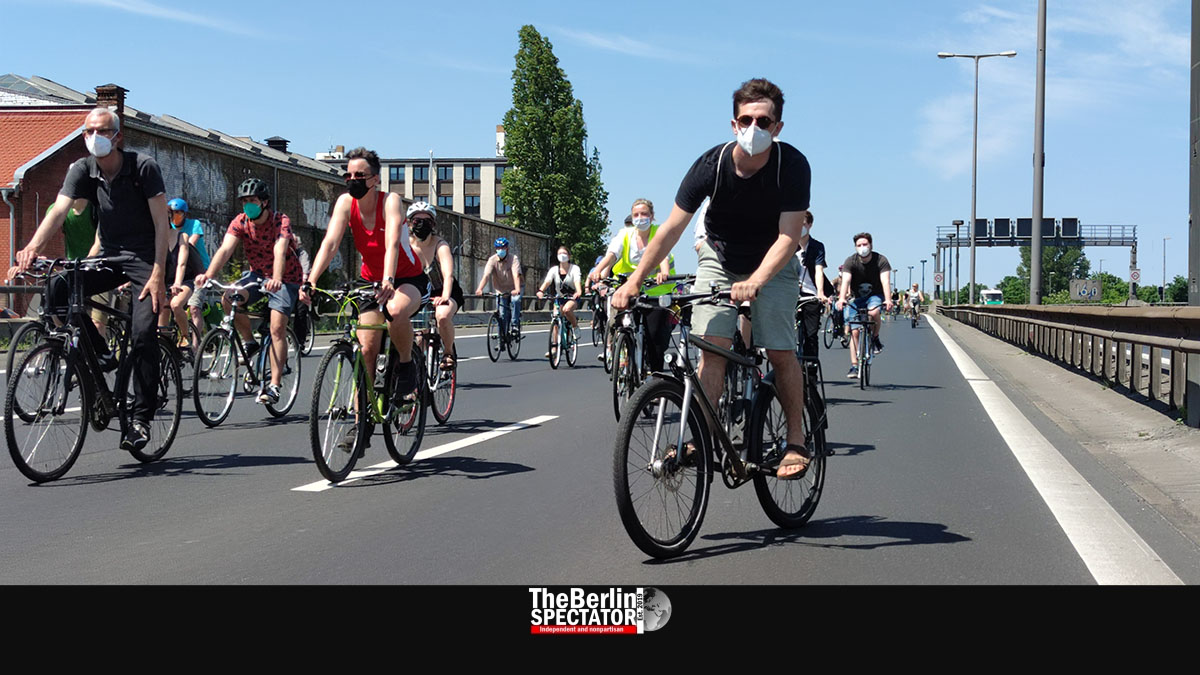 The Autobahn A100 is the most important traffic artery Berlin has. To the group ‘A100 Stoppen’, the city freeway symbolizes an old traffic policy which favors motorized vehicles. Its members protested against its extension today.

Berlin, June 5th, 2021. Update: June 6th, 2021, 6:05 a.m. (The Berlin Spectator) — To hundreds of activists, riding their bicycles on the Autobahn was a liberating feeling. For a little while, they felt like victors in their fight against the motor vehicle in Berlin. To their opinion, the city freeway (brit.: motorway) takes up too much room and adds to the air pollution. While other groups in Berlin fight the car as well, ‘A100 Stoppen’ concentrates on the A100 Autobahn, which stands for a traffic approach they reject.

The bicycle protest in Berlin was part of a nationwide “action day for a socially just and eco-friendly mobility transition” which included “protests, rallies and action against the construction of Autobahnen and highways in the entire country”, according to the movement. An immediate construction freeze is what “A100 Stoppen” wants. “If they do not stop it, we will take action”, an activist vowed. “Let’s turn the Autobahn into an area for recreation and encounters”, the group says.

Its members are demanding “a moratorium on plans for the Autobahn extension and on their implementation”. They say the money that would become available when the construction was halted needed to be used for the traffic transition, affordable housing and bicycle highways. “A100 Stoppen” also demands a conservation of “the clubs” on the planned Autobahn extension route. This last demand reveals where at least some of the activists come from. They are obviously party people.

Extension to Treptower Park Under Construction

At noon, members of the group and hundreds of supporters assembled at Platz der Luftbrücke (‘Airlift Square’) in Berlins Tempelhof borough. The police escorted them to the Tempelhof freeway entrance ramp (brit: motorway access). From there, they rode along the Autobahn all the way to Neukölln. Hardly anyone saw the protesters there, because the Berlin Police Department had blocked it to motorized traffic.

Earlier on Saturday, activists had entered the A100 construction site illegally. The police arrested them temporarily in order to take down their data and initiate legal proceedings against them.

The A100 Autobahn connects Seestrasse in Berlin’s Wedding district to Grenzallee in Neukölln. Originally, it was supposed to be a freeway ring. At this stage, an extension from Grenzallee to Treptower Park is being constructed. Another stretch from there to Frankfurter Allee, a major street in former East Berlin, is in the planning stage. The center-left Berlin Greens, who might very well win the upcoming state elections in September, oppose the extension. Since the far-left ‘Die Linke’ noticed they might be able to gather more votes by opposing traffic projects too, they jumped on the bandwagon.

A total of 1.23 million passenger cars are registered in Berlin, some 115,000 more than ten years ago. Traffic is pretty bad in many areas. The A100 is the most frequented road in the city of 3.8 million inhabitants. Sixty-three years ago, in 1958, the first part of the A100, from Kurfürstendamm to Hohenzollerndamm, was constructed.