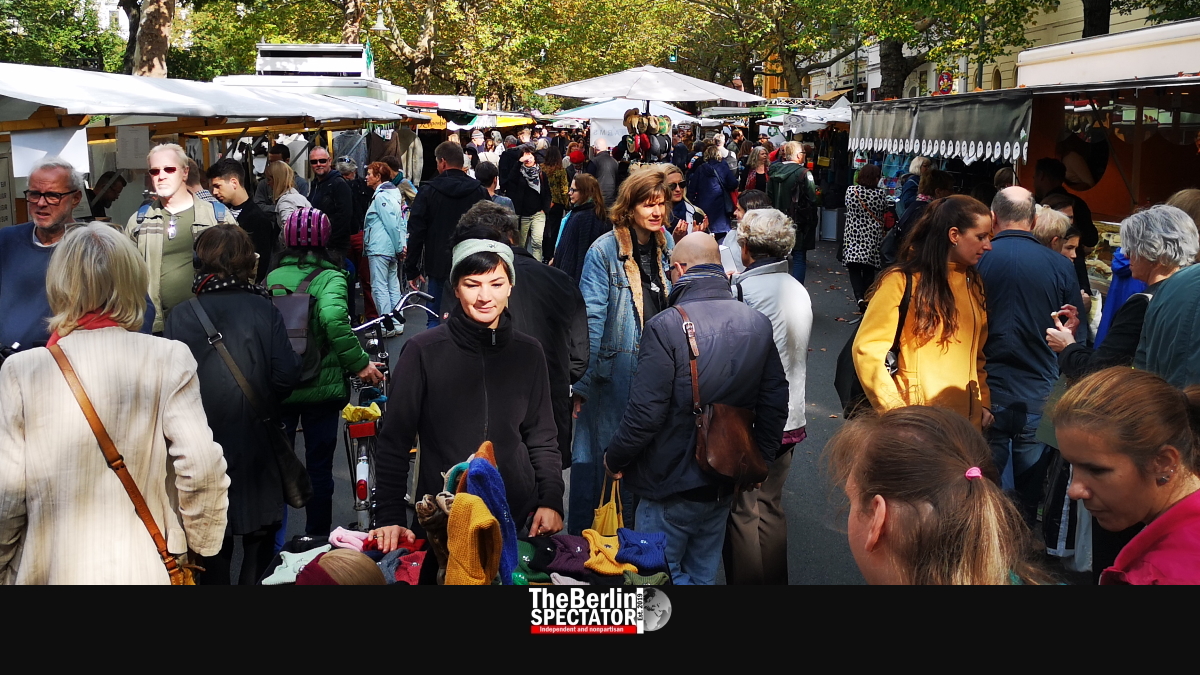 Awesome is a very appropriate adjective when used in the same sentence with the weekly market on Berlin’s Kollwitzplatz in the city’s posh Prenzlauer Berg district. You want the most delicious fish sandwich ever, cheese you will get addicted to, and the creamiest New Zealand peanut butter you ever tried? Go there.

Berlin, May 20th, 2019. Update: June 5th, 2021 (The Berlin Spectator) — Just walking by that cheese vendor who keeps on cutting it into tiny pieces for people to try is simply impossible. An invisible force pulls any cheese lover towards the stand and makes him or her ‘try’ it several times in a row. Grabbing a piece of it for the fourth time this morning is embarrassing, since the vendor is starting to notice. Where are those disguises when you need them?

The Art of Young Herring Sandwiches

I already saw myself in a cross-examination in front of a court. “Mr. Marcus, did you or did you not approach that cheese stand six times that morning?” I imagined being forced to face the jury for the verdict: “For trying that cheese too often, I hereby sentence you to rotting in hell.” But even that I would accept if I could only try one more piece.

Seriously: This is how good that cheese from Bavaria’s ‘Allgäu’ region is. But on this weekly market, which takes place on Berlin’s Kollwitzplatz on Saturdays, they offer many more treats from the category ‘too good to be real’. Let’s not even mention those truffles. I was scared and stayed away.

But at one of the fish vendors, I ran into ladies who were involved in an activity called ‘making the best fish sandwich in Central Europe’. This is how they do it: A fresh German bread roll is being sliced open. They place a salad leaf in there and two slices of the freshest matie (young herring). On top of the fish, which they probably get straight out of the North Sea, they add apple slices, raw onion and some plum jam. This product is so delicious it should be forbidden by law.

A few meters further down the street, I engage in a conversation with a Canadian couple. They are walking their Corgi they brought from North America and are part of the proof for the fact that ‘Kollwitzplatz’, this nice square which accommodates the weekly market on Saturdays, is one of the most international spots in Berlin.

At the next stand I come across, I meet Corby Lovell. The New Zealander is not the only expatriate who came to Berlin as a love bird, by following his girlfriend. But he is the only one who produces ‘handmade organic peanut butter’ in two versions, light and dark. Lovell does not mind naming the ingredients he uses: peanuts, coconut oil and sea salt.

Indeed, his peanut butter does not have much in common with the north American stuff they sell at supermarkets. It tastes fresh, real and authentic, as if a guy named Corby Lovell, Berlin’s expat peanut butter producer, had made it himself. His little company is ‘Twisted Nut’ and his products are Berlin-compatible since they are gluten-free, lactose-free and vegan.

Time for the big question. Ready for it? Here we go: How does a citizen of New Zealand, one of the most beautiful countries in the world, feel in Berlin? The answer is convincing. According to Corby Lovell, the German capital is a great place when you are young and want the party atmosphere it offers. At some point later in life he does want to return. Let’s hope it will take a long time, because we would not only lose a nice guy in this city, but also his great peanut butter.

A few steps away from Corby Lovell, Tom Bäcker is selling his nice mugs with the names and artwork of many of Berlin’s U-Bahn stations (read separate article here). You want a mug saying ‘Warschauer Straße’, ‘Alexanderplatz’ oder ‘Hermannplatz’? Then he is your guy. He offers more good souvenirs, including magnets and postcards. The mugs are lactose-free too, as long as their users refrain from filling them with lactose products.

This Saturday market in ‘Prenzlauer Berg’ is the spot at which inventors and people with their own ideas, people like Corby Lovell and Tom Bäcker, offer their products. At one stand, a man is selling a device people stick into lemons and oranges, which will suck out even the last drop of juice easily. Another nice guy is selling soda cans, meaning that is what they look like. But they are actually secret hiding spots, for instance for money. Well, they were secret until I wrote about them a second ago.

One of the most popular stands on the entire market is a Turkish one. They do offer Turkish food, but not the kind of thing certain parts of Berlin are full of. It is something far more special. Their sign reads ‘Türkische Bauernküche’ (‘Turkish Farmers’ Kitchen’) and their product is ‘Gözleme’. Those delicious looking wraps resemble Mexican quesadillas.

They fill them with anything their numerous customers want, such as spinach, different kinds of cheese, including feta, chicken meat and basically anything. Especially around lunch time, people need to stand in line to get their ‘Gözleme’. Sometimes the line is so long it ends in Potsdam. A good sign.

What? This is not the only feature or article The Berlin Spectator offers?
Well, no. And chances are you will like the whole enchilada.
Check out our main page to see it all.

Back to the inventions. A lady who comes to this market every week with her small stand sells self-made bicycle saddle covers in different patterns and shapes. She uses fabric which feels very nice. Her covers can be turned around and they will protect saddles from rain with the rubber layer they have inside. That same layer will reduce friction while riding. The products she offers may not be cheap, but they feel good and make cycling great again.

Hey, let’s not forget all the vitamin bombs, meaning the fruit and veggies they sell, the pottery, the self-knitted baby socks and caps, as well as the Italian leather bags sold by this kind Brazilian lady. Everything mentioned here is still only a fraction of what the most awesome weekly market in the universe offers.

The market was founded by Andreas Strube when the new millennium dawned 19 years ago. He says it has been taking place every Saturday ever since. It has opened in the snow at minus 10 degrees Centigrade (14 degrees Fahrenheit) and in the worst summer heat imaginable.

Rain or shine, the market will be there. According to Andreas Strube storms have caused trouble at times. At wind force 8 or higher, vendors are not allowed to set up their stands, for safety reasons. But the wagons are always on site. Period.