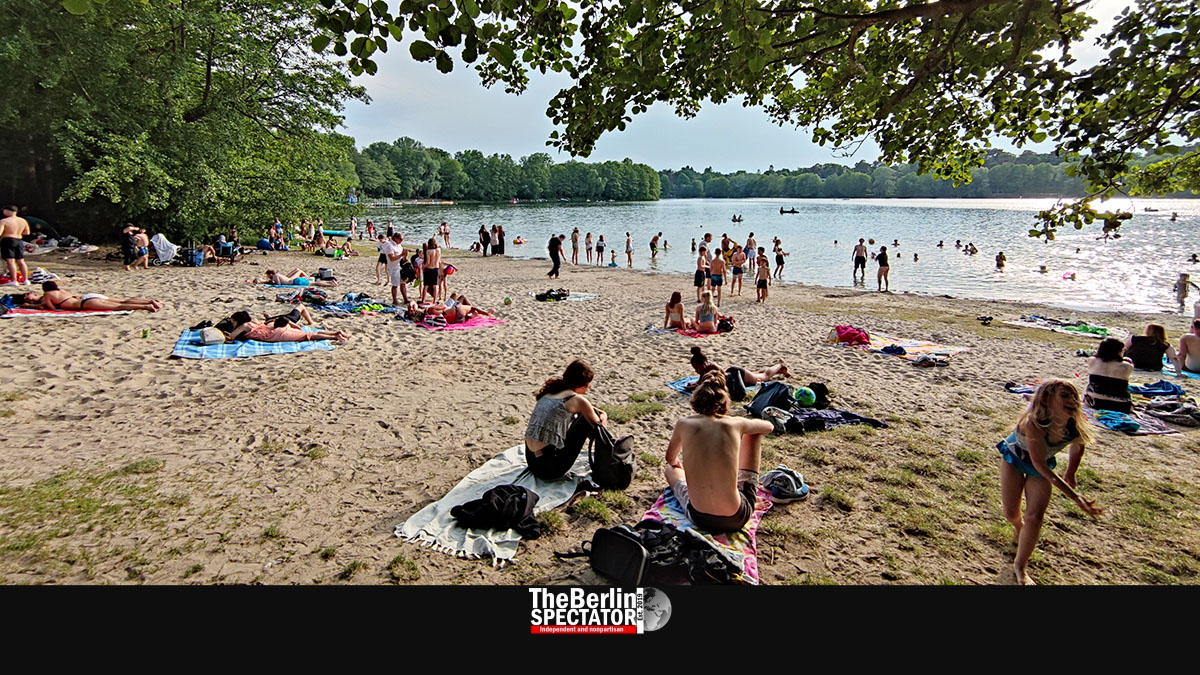 Gross Glienicker See is a great lake to jump into. The joy of being there might be marred by the fact that most of the lakefront is private property. But those who want to swim in the cleanest lake ever should go there anyway.

Berlin, June 8th, 2021 (The Berlin Spectator) — There are several lakes that separate Berlin from Brandenburg province, but we liked the headline. Besides, this is one of the most beautiful and cleanest ones. The health authority in Berlin’s Spandau district has quite a few main missions. One of them is to keep Gross Glienicker Lake as clean as it is. There are hardly any lakes in which swimmers can not only see their feet, but also what is going on below them.

As long as people behave, nothing will contaminate Gross Glienicker Lake’s water. There is no inflow. Heavy rain could wash dirt into the lake, at least in theory. That is why officials with test tubes check the water on a regular basis. Littering or abusing the lakeshore as a bathroom should be avoided. The ground rule according to which motorboats are forbidden gets rid of another potential pollution source. Four words: This lake is clean.

That is why the ‘Europäische Wasserstelle’, a beach at the lakefront, was crammed on a nice Sunday in early June of 2021. The water was still cold enough to shrink certain body parts, but people did not care. They needed a tiny beach vacation after almost one and a half years of Coronavirus scares and lockdowns. Teenagers played Christopher Columbus on inflatable boats while smaller kids dug into the sand with tiny plastic shovels.

At Gross Glienicker Lake, there are many activities adolescents and adults engage in. For instance, they swim from Berlin to Brandenburg and back. Since the border runs right through the middle of the lake, this is a lot easier than swimming across the English channel, or from Cuba to Key West in an anti-shark cage. People also stand on SUP boards (standup paddle boards), and they rent boats to explore the lake.

At the ‘Bootshaus’, located in Berlin, but right at the state border, families enjoy pricy and delicious lunches and dinners while their kids play at the playground. They pour beer down their throats. And they rent those boats. On one of the trees in the restaurant’s impressive garden, an old sign reminds people of where they are: “Frontier area. Passage not allowed.” Yes, this used to be the border between West Berlin and the German Democratic Republic, which was about as democratic as Belarus is today, meaning it dot live up to its name at all.

Another option, which does not seem to be too popular, is walking to Brandenburg through a little forest. In the province, another tiny public bathing spot is hidden behind elegant family homes with big gardens. From here, bathers can wave to all those people at the crammed beach in the city state of Berlin. Walking any further at the lakefront is forbidden, according to a sign.

There are two camping grounds on the Berlin side of the lake. Many Berliners placed their caravans there permanently. Why go to Delaware Beach, the Copacabana or Bordeaux if the next beach is so close? Well, maybe because parking is difficult. Everyone will come to Gross Glienicker Lake on sunny weekends, including those ignorant contemporaries on Harley Davidsons with manipulated exhaust pipes who terrorize the entire area with their noise. Going there at a crazy time, such as 7:00 a.m., might be a good idea. Taking a nice walk in winter, when hardly anyone goes there, is a lot easier than hitting the lake in spring or summer.

Yet another activity at this lake is fishing. According to an information board at the lakefront, Gross Glienicker See accommodates eels, pikes and basses. Don’t forget your fork. Bon appétit.