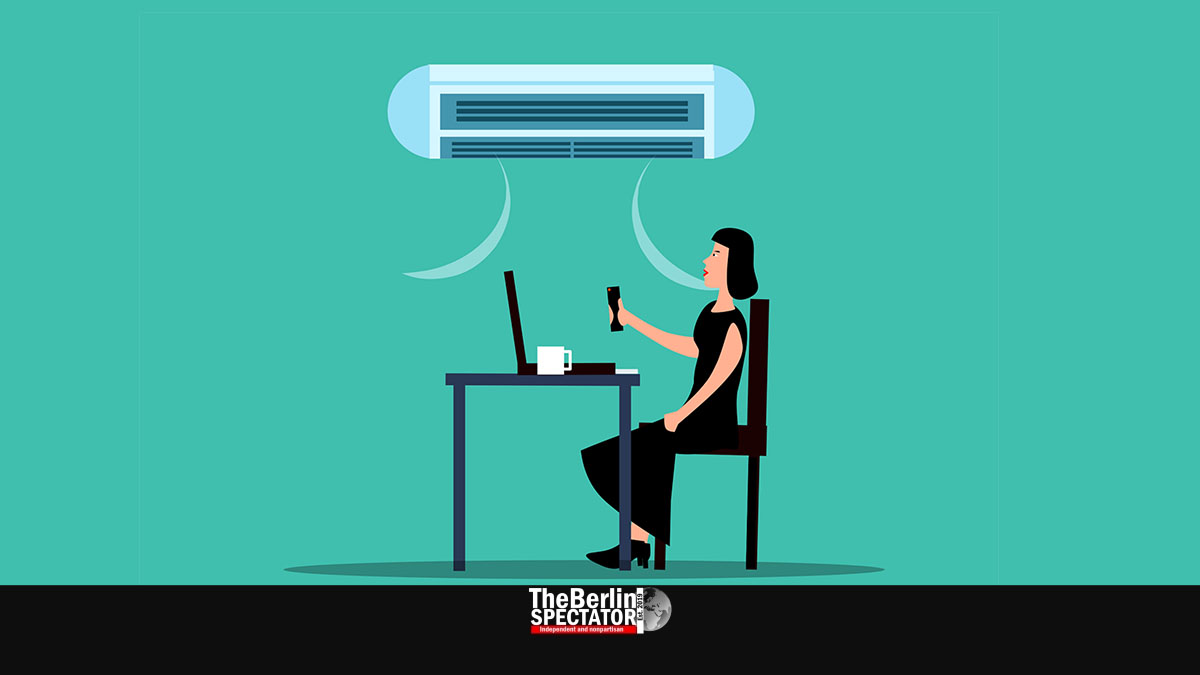 In the past few decades, the weather in Germany got hotter and dryer. In spite of this development, the Germans are reluctant to cool things down properly. This applies to apartments, offices, cars and even drinks.

Berlin, July 11th, 2020. Update: June 8th, 2021 (The Berlin Spectator) — On a warm June day in 1976, a bunch of 11-year-old boys could not wait. They were looking at a thermometer during their first 20-minute break at ‘Gymnasium Müssenredder’, a high school in Hamburg’s northern ‘Poppenbüttel’ borough. They wanted it to hit the 28 degree mark (82 degrees Fahrenheit). But it was a little too early.

Two history lessons later, during the second break, a loudspeaker announcement by the headmaster, Mr. Dibbern, echoed through the premises. He said all students were allowed to go home, due to ‘Hitzefrei’. There is no proper translation for this German noun. The direct one would be something like ‘time off due to heat’. It meant the school would be shut down for the rest of the day because of high temperatures that had the potential to melt the brains of both students and teachers.

What they called heat in 1976 is below average today. Thanks to the changing climate, north-western Europe is almost as hot as the Balkans, southern France or California’s Central Valley these days. But somehow the Germans are reluctant to adapt.

Germans are simply not good at cooling things down. In the 1970s, 80s and 90s, ordering a glass of Coca Cola or lemonade in the average German restaurant lead to disappointment, because the fluid the waitress brought a few minutes later would be warm, at room temperature, in many cases. Come on, who drinks warm Coke? Well, the Germans obviously did.

For decades, there was only one thing the Germans would cool down, namely their ice cream. Oh yes, they loved licking that stuff, and still do. Germany is not only a big ice cream consumer, but an even bigger producer. More than half a billion metric tons of ice cream per year carry the ‘Made in Germany’ label.

Branded ice cream, ice cream parlor ice cream, soft ice cream or whatever it is: The Germans will lick it away like crazy. This applies to all generations. They also do hop into swimming pools and lakes. But, other than that, cooling down is not really what the Germans concentrate on.

In the United States of America, it does not matter where you go. Any offices, malls, shops or restaurants are being cooled down to 65 degrees Fahrenheit (18 degrees Centigrade) in summer. Yes, the Americans may be exaggerating, but the Germans are the other extreme.

While America started to equip those bathtubs on wheels, which it called cars, with A/Cs even in the late 1950s, that kind of amenity was unheard of in Germany even more than a quarter century later. Back then, the Germans did have a point because their weather was cooler and more rainy. Lower Saxony is not California. But today, their refusal to live in the modern world, in this regard, is a little weird.

Sure, whoever puts a big pile of money on the table can purchase a German luxury car with a very effective A/C. Also younger Germans tend to insist on their drinks being ice cold. But A/Cs in office buildings and apartments are still rare.

People would rather sweat like crazy than install something considered unhealthy in Germany. “I don’t want to catch a cold” is what Germans usually say when asked about the subject. Somehow they cannot grasp the idea that it all depends on the right setting.

Many tenants in Germany are not allowed to have A/Cs installed in the apartments they live in. Landlords do not seem to want to have those A/C boxes on the outer walls of their apartment blocks. Some authorities ban them and cite all kinds of reasons, including energy consumption.

Cooling Down or Moving

Many of the 35,000 American soldiers stationed in Germany and their families have their problems with the lack of air conditioning in Germany. In 2015, Bryan Gatchell gave them suggestions about “Staying Cool in Germany Without A/C” on the U.S. Army’s website.

Those included rolling down the shutters during the day, opening the windows during the night, drinking a lot of water, wearing lightweight, light-colored clothing, reading the Army’s ‘work/rest chart’ and using sunscreen. No, applying for a redeployment to Antarctica was not on the list.

In Germany’s public transport, things look a little better by now. In Hamburg, Frankfurt, Munich and many other cities, modern buses, trams or ‘U-Bahn’ trains are being cooled down, but for ages they were not. The only issue here is that A/Cs in electric buses reduce their ranges. When cooling down or driving to the next stop is the choice, bus drivers tend to choose the latter.

People who actually want to be fried like t-bone steaks should come to Berlin. On the ‘U-Bahn’ lines 1 and 3, temperatures can reach 54 degrees Centigrade (130 degrees Fahrenheit) on hot days. The same applies to the German capital’s old buses. Being Germans, many drivers would not switch on the A/Cs in newly purchased Diesel buses either.

In some German summers, raincoats are far more useful than A/Cs. But, far too often, cooling things down would be an excellent idea.