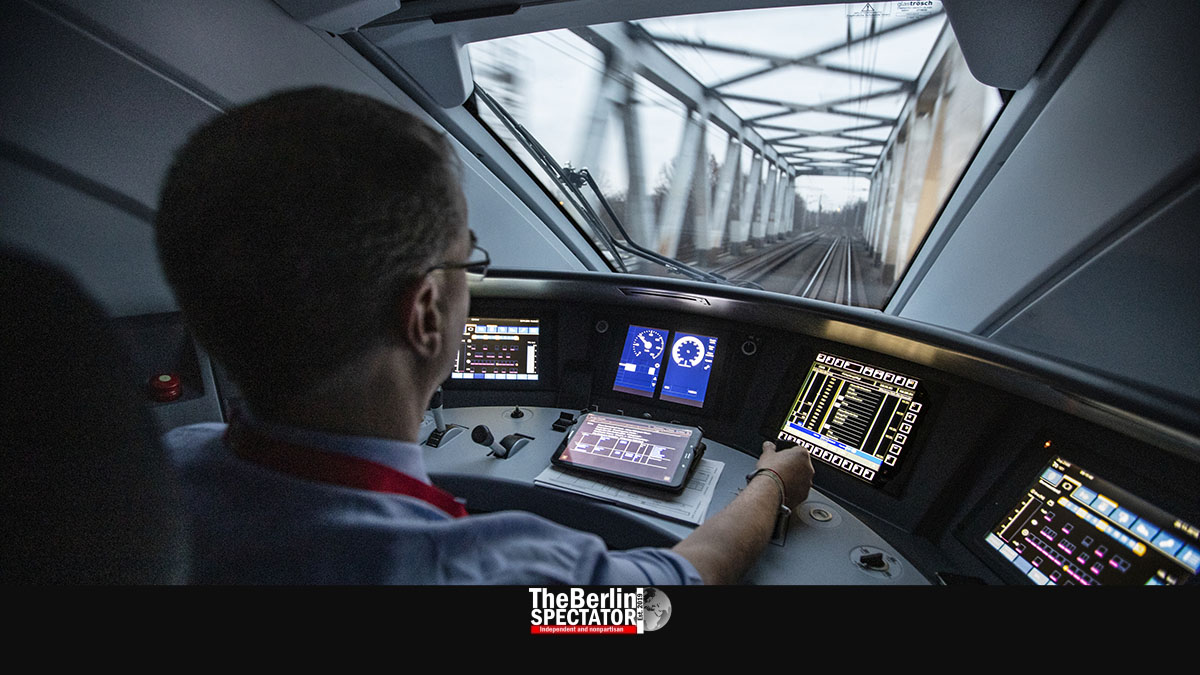 Fast, faster, ICE trains. They have been racing back and forth in Germany for three decades. President Frank-Walter Steinmeier just baptized a brand new bullet train in Berlin. Nothing will stop the ICE, except for the walkouts the union GDL just announced.

Berlin, June 9th, 2021 (The Berlin Spectator) — “We are celebrating nothing less than a German emblem”, President Frank Walter Streinmeier accurately said, as he was standing in front of a new, shiny and very impressive ICE bullet train of the fourth generation. He was the one who baptized the extra long means of transport. Its name is ‘Bundesrepublik Deutschland’ (‘Federal Republic of Germany’). Since it is the official 30th anniversary train, no other name could have been more fitting. Whoever chose it should be rewarded with a free ICE train ticket from Hamburg to Hanover.

In the 1970s, West Germany had ‘Trans Europe Express’ (TEE) and Inter City (IC) trains. The latter are still moving on the thousands of kilometers of tracks Deutsche Bahn (DB) is using. But the ‘Inter City Express’ (ICE) is a whole lot faster. On June 2nd, 1991, only months after Germany’s reunification, the ICE became part of DB’s official schedule. The new fourth generation ICE train, the one with that very appropriate name, was baptized with water taken from Germany’s longest rivers, namely the Danube, the Rhine and the Elbe.

No, President Steinmeier did not break the bottle on the train. This kind of brutal procedure would have scratched it. He just poured the water over it. The ‘Bundesrepublik Deutschland’ is the longest ICE train of them all. It measures 374 meters (1,227 feet). More numbers? No problem. This new ‘XXL ICE’ has 918 seats. In order to transport this many passengers on aircraft, two Airbus A380s in the usual configuration would be required, or some 250 passenger cars.

‘Idea of the Future’

Even more numbers? Here we go. Numbers is our middle name. The new ICE is being pulled by an integrated locomotive with exactly 15,640 horse powers. Its maximum speed is 265 km/h (165 mph). Do not tell anyone, but the French TGV and Japanese bullet trains are actually faster. So are DB’s own ‘ICE Sprinters’. At this stage, the Germans run 330 ICE trains. Within the next five years, 89 more are supposed to be put on the tracks. At some point, there will be 600 of them. Until 2026, Deutsche Bahn, a state-owned company, intends to invest 8.5 billion Euro (10.3 billion U.S. Dollars or 7.3 billion Pounds Sterling) into its long-distance trains.

At the baptizing ceremony, President Steinmeier said, no historical monument was being celebrated, but “an idea of the future”. Germany was debating the question how the CO2 emissions could be decreased, Steinmeier stated. The answer had been available for 30 years. It was the ICE. For DB, its CEO Richard Lutz said the ICE offered passengers speed, comfort and climate protection. According to him, the ICE is both the pride of Deutsche Bahn and a symbol for the mobility transition. “The ICE has defined train travel in Germany anew”, Lutz stated at Berlin Central Station.

The man is right. His ICE actually makes domestic flights unnecessary. If Germany was as large as Canada, the United States of America, Russia or China, it would be different. But since the country of cuckoo clocks is about half the size of Texas, a fast train like the ICE is definitely good enough. Since June of 1991, as many as 1.5 billion passengers have traveled on ICE trains. It is a success story.

Once, on June 3rd, 1998, tragedy struck. An ICE train which was named after the X-rays pioneer Wilhelm Conrad Röntgen derailed in Eschede, a community in Lower Saxony. One hundred and one passengers died, 88 were injured badly. Technical changes were made after this catastrophe. The ICE’s main competitor, the suspension monorail Transrapid which Germany wanted to use and export, was dumped after a bad accident on September 22nd, 2006, in which 23 people died.

The ICE survived. During the three Corona waves that have hit Germany so far, the bullet trains were sort of empty. But, in normal times, they can be crammed. Quite often, passengers have to sit on the floor or stand for several hours. This usually happens on long weekends and during holiday seasons. The upcoming summer holiday could be rather difficult. Now that many Germans finally want to travel again, after one and a half years of Corona scares, the engine driver union GDL intends to organize a walkout because they could not convince DB to fulfill its demands in regard to its members’ wages.

Steinmeier at The Africa Roundtable: ‘Pandemic Does Not Affect Everyone the Same Way’