Steinmeier at The Africa Roundtable: ‘Pandemic Does Not Affect Everyone the Same Way’ 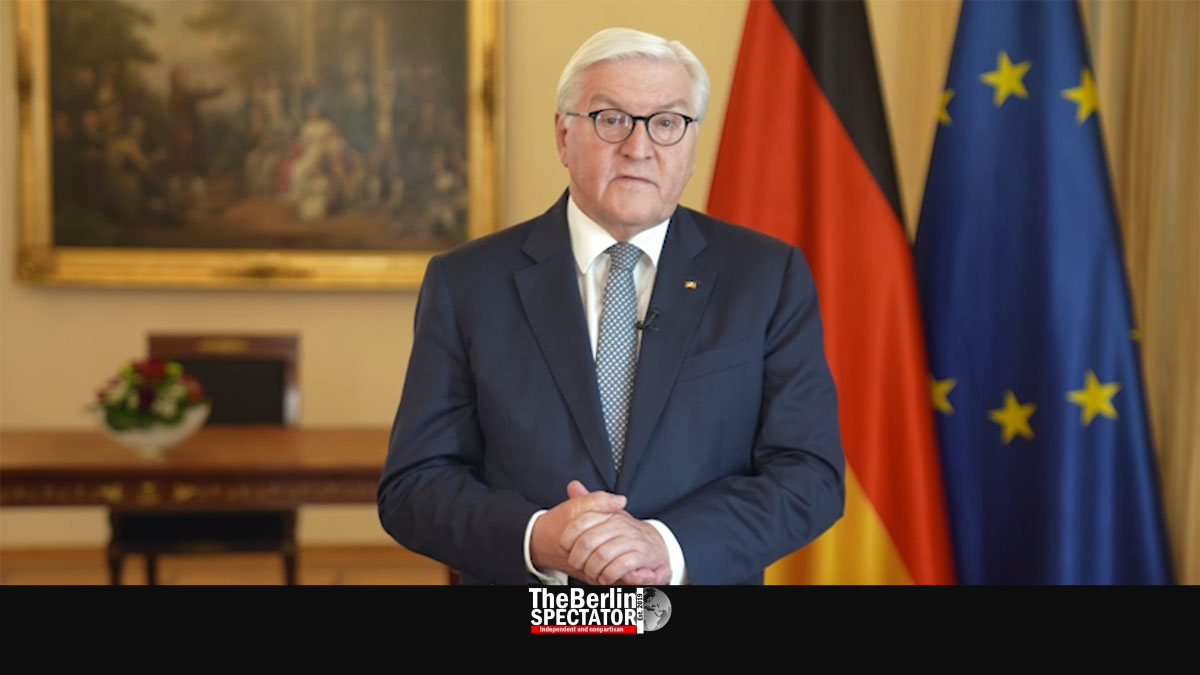 A new forum about cooperation between two neighboring continents, namely Africa and Europe, took place on Wednesday. Because of Corona, its first edition was an online event. Germany’s President Frank Walter Steinmeier took part. He called for a close cooperation in the fight against Corona and climate change.

Berlin, June 9th, 2021 (The Berlin Spectator) — At The Africa Roundtable, a forum on European-African cooperation, President Steinmeier held a speech today. Even more more Europeans had fallen victim to COVID-19, there was a danger that the economic and social consequences of the pandemic would cause much greater damage in Africa, he stated. Steinmeier pleaded for a close cooperation, in regard to the fight against both Corona and climate change.

This is President Frank-Walter Steinmeier’s full speech at The Africa Roundtable:

“Africa and Europe – I’m delighted that this Roundtable is taking a fresh look at relations between our neighboring continents! I would like to sincerely thank the Global Perspectives Initiative for this invitation, even though – unfortunately – the pandemic means that we cannot all meet in person yet. I’m especially pleased that President Macky Sall is going to speak to us from Dakar today. Senegal is part of the Compact with Africa – a key initiative of the German Government – and our two countries are linked by a close partnership.”

“I’m also glad, Ngozi Okonjo-Iweala, that you are taking part today. You are the first woman and the first African to head the WTO. Let me congratulate you on that, Dr. Okonjo-Iweala! Honored guests of this Roundtable, even before I became German President, I attached special importance to Africa’s future and African countries’ relations with Europe. My last trip before the outbreak of the pandemic took me to Kenya and to the Sudan. I was deeply impressed by the huge social, economic and political momentum in both countries.”

“However, I also sensed the strong desire for change on trips to Africa in previous years – in Ethiopia before the outbreak of the conflict in Tigray, in South Africa and Botswana, in Ghana and the Gambia. The pandemic has severely tested the very special bond between Africa and Europe. Our geographical proximity to each other suddenly became insurmountable. Trips and talks became almost impossible. At the same time, however, the pandemic has yet again clearly highlighted both our mutual vulnerabilities and our close ties.”

“The pandemic affects us all – Europeans and Africans. But it does not affect everyone in the same way. Many more people have fallen victim to COVID-19 in Europe’s older societies than in Africa’s younger ones. However, there is a real danger that the economic and social consequences of the pandemic will cause much greater damage in Africa. Much of the progress made by African states in the fight against hunger and poverty, in the efforts for better healthcare and better education, is at risk due to the pandemic. We in Europe cannot remain indifferent to that.”

No Vaccine Production in Africa

“Yes, we Europeans hope that the worst of this pandemic will soon be behind us because vaccines were developed in record time. But it is also important to Europe that Africa can put this pandemic behind it as quickly as possible: on humanitarian grounds, on medical and epidemiological grounds but also – and this has been important to me personally since the start of the pandemic a year ago – on political grounds.”

“We all know that governments have a responsibility first and foremost to their own population. It is therefore understandable if governments want to vaccinate people in their own countries first. But we must also face the fact that almost half of the world’s population lives in states which do not have the means to become the preferred customers of vaccine manufacturers. And COVID-19 vaccines are still not being produced in Africa. The inevitable result is that only a small percentage of the population can be vaccinated in countries which are poorer but where the need is just as great.”

“In contrast, it is possible to vaccinate a much higher percentage in richer countries. Europe certainly does not have to be modest about its efforts to put the imperative of vaccine solidarity into practice: Without the energetic initiative of the European Union and its member states, the COVAX vaccine initiative would most likely not have been launched. No
continent exports more vaccines than Europe.”

“And yet both European and German policymakers have to ask themselves some critical questions: Have we managed to explain to people in our countries in a convincing way why it benefits everyone if, initially, fewer people are vaccinated in all countries rather than everyone being vaccinated in just a few countries? Is it enough to be pleased about falling Incidence rates and rising vaccination rates in our own country if far, far fewer people have reached the safety of the shore in other parts of the world?”

“It was a major step forward when European and other G7 countries recently decided to donate millions of vaccine doses this year so that healthcare professionals and vulnerable groups could be vaccinated in Africa and in other parts of the world. However, the question remains: Shouldn’t this have happened sooner and on a larger scale? I know that many people in Africa feel the current situation to be unfair – and I share that sentiment. After all, it remains true that we can only defeat the virus if we defeat it throughout the entire world.”

“The efforts within the WTO to find a way to work together to expand the global production of vaccines as quickly as possible is therefore all the more important. Europe’s initiative to help African countries to increase and strengthen their own vaccine production is therefore all the more vital. It is this step towards production on the African continent which will free Africa of its overdependence on other supplier countries.”

“At the first African vaccine summit in April, African countries made key decisions on this and set ambitious targets. I’m delighted that one of the most promising partners for this forward-looking project, the renowned Institut Pasteur in Dakar, is based in Senegal. I very much hope that this will enable us to expand our German-Senegalese cooperation in the coming years.”

“The pandemic is raging in every corner of the world. And yet it has narrowed the vision of each one of us. Our task now is to quickly broaden our outlook once more and to pay more attention to what is happening in neighboring regions of the world. Yes, the pandemic and its impact will keep us occupied for some time to come, and it will cause yet more suffering. However, I’m confident that we can and will overcome it. But it is not only important that we work together when it comes to the pandemic.”

“If everyone thinks first and foremost of themselves in the face of the direct threat posed by this pandemic, how can we remain confident that we can win the fight against the much more complicated threat of climate change? But if we can act in a spirit of solidarity, if we see our future as a shared future, then we’ll have reason to be optimistic that together we can master the fight against climate change. After all, that is a much bigger challenge for humanity.”

“Many African countries are suffering dramatically due to the effects, such as droughts, failed harvests and flooding. But we in Europe have also felt the effects to a greater extent in the last few years. Therefore, we – Africa and Europe – have to do everything we can together and as part of the international community to limit global warming. I look with confidence to the next climate summit in Glasgow – not least because the United States has returned to the group of countries which have undertaken the fight against climate change.”

‘A Cooperation which Respect Differences’

“What applies to climate change also applies to other major issues: migration, the digital transformation, terrorism, the consequences of globalization. We, Africa and Europe, need each other to tackle the major challenges. And we can learn a lot from each other. I hope that the postponed EU-AU Summit can take place soon and that it will provide fresh impetus for our relationship. The African Union’s strong, self-confident motto for the continent’s future is: “The Africa We Want”. I believe that the key to our common future, to our future collaborative efforts, also lies here: a cooperation which respects differences and knows that new combined strength will grow from this relationship. I would like to thank you most sincerely and wish you a stimulating exchange!”

At the Africa Roundtable, “the current urgent questions and challenges of the neighboring continents as well as partnership approaches and models of future cooperation are discussed”, the organizers say. The Bill & Melinda Gates Foundation, the German Federal Ministry for Economic Cooperation and Development, the Robert Bosch Foundation, the McKinsey Global Institute and others support the event. At its first edition, the main subjects were the recovery from the Corona pandemic and ‘Green Transition’.