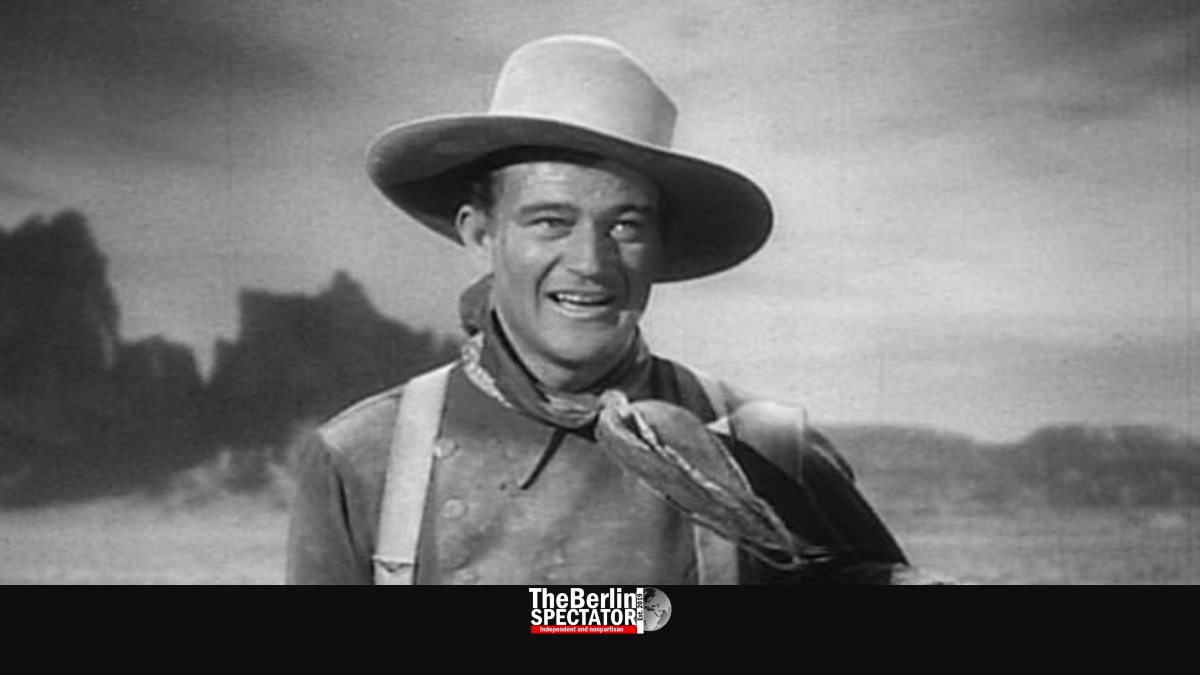 The Germans eat raw ‘wurst’, their ‘Office of Order’ sends out parking tickets, and they close all shops on Sundays. All of this is pretty crazy already. But the way they change Hollywood movie titles is just unbelievable.

Berlin, May 12th, 2019. Update: June 12th, 2021 (The Berlin Spectator) — Steven Spielberg’s 1975 movie is a sensational masterpiece. The director found new ways to create true suspense. Actually, he was forced to take a low profile approach, by hardly showing that big white shark that terrorizes an American beach resort, because the shark robot they built for the movie did not work properly. That is what Spielberg explained in an interview, ages ago.

Screaming and Moaning in German

For his motion picture with Roy Scheider as Chief Brody, he found an excellent title, namely ‘Jaws’. One single word already created fear and suspense. Had Spielberg called it ‘The White Shark’, it would have sounded like a pretty bad flick and it would have given away too much of the story. But what title did the Germans pick for the movie? They screwed it up. Yes, ‘Der weiße Hai‘ stands for ‘The White Shark’. Nobody was jailed for that choice. Unfortunately.

In Germany, Hollywood movies are generally dubbed, but the audiences in the German-speaking part of Switzerland watch original versions in English. The average German movie enthusiast would understand movies in English only in part, while the Swiss, the Dutch and other neighbors do not have any issue with movies in English, unless they contain actors from Glasgow.

That is why Dustin Hoffman had to scream in German, when Laurence Olivier tortured him in ‘Marathon Man’. Jack Nicholson and Jessica Lange had to moan in German in their sex scene on the kitchen table in ‘The Postman Always Rings Twice’. The late Roger Moore’s German and performance were impressive in ‘Moonraker’, the best James Bond flick of all time.

When the Title is ‘Taken’

For every single Hollywood superstar, Germany has a voice double, meaning it is always the same person who dubs the voice of any famous American actor. Some voice doubles do more than one actor. The late Niels Clausnitzer was a prominent example. For the German versions of countless movies, he dubbed many actors, including Ronald Reagan, Cary Grant, James Garner, Roger Moore, and also Max Wright in the 1980-s sitcom ‘ALF’. But the dubbing is not really the issue. The titles are.

‘Taken’: A great title. Liam Neeson needs to rescue his daughter who was abducted by the bad guys in Paris. He has a nice little phone conversation with one of them, before he converts the entire gang into dogfood: “I will look for you. I will find you. And I will kill you.”

While the dubbing itself was done well, the Germans destroyed the movie title as well. In this case, they even did so in English, by calling it ’96 Hours’. How misguided is that? Anyone who has watched that movie knows where those ’96 Hours’ come from, but ‘Taken’ is a far better title.

‘Thor: The Dark World’ is ‘Thor 2: The Dark Kingdom’ in Germany. Why would Kingdom sound more catchy? Or why would more Germans understand the word ‘kingdom’ better than the word ‘world’? Something is very wrong here.

Jim Carrey’s 1997 movie ‘Liar Liar’, in which he plays a lawyer who suddenly can not lie anymore, made its audience laugh a lot. The scene in which he has to say what he thinks of his boss is priceless. Again, the Germans destroyed the idea of the entire flick by calling it ‘Der Dummschwätzer‘ (‘The Trash-Talker’). Those who took this decision must have been stoned or drunk. Or both.

There are cases in which the German movie title creators did the right thing. ‘Groundhog Day’ is something nobody in Germany really understands since it is an American custom. They just had to find an alternative. But then, being Germans, they chose the worst one they could think of. The outcome was ‘Und täglich grüßt das Murmeltier’, meaning ‘And the Groundhog Salutes on a Daily Basis’. To hell with that.

Even horror movie titles can be destroyed, as we found out in Germany. ‘Dawn of the Dead’ became ‘Zombies in the Department Store’ (‘Zombies im Kaufhaus’), ‘Tremors’ became ‘In the Land of Rocket Worms’.

O.k., let’s look at a real classic. Nobody ever messes with John Wayne, except for the Germans. In Germany, the Nazis were in power in 1939, while Hollywood was busy producing flicks like ‘Stagecoach’ with John Wayne as the main character. After the war, the Western was shown in Germany, with a ‘slightly different’ title: ‘Hell Ride to Santa Fé’ (‘Höllenfahrt nach Santa Fé’). Decades later, they thought they should rename it again, since the movie has absolutely nothing to do with ‘Santa Fé’. So the motion picture became ‘Ringo’.