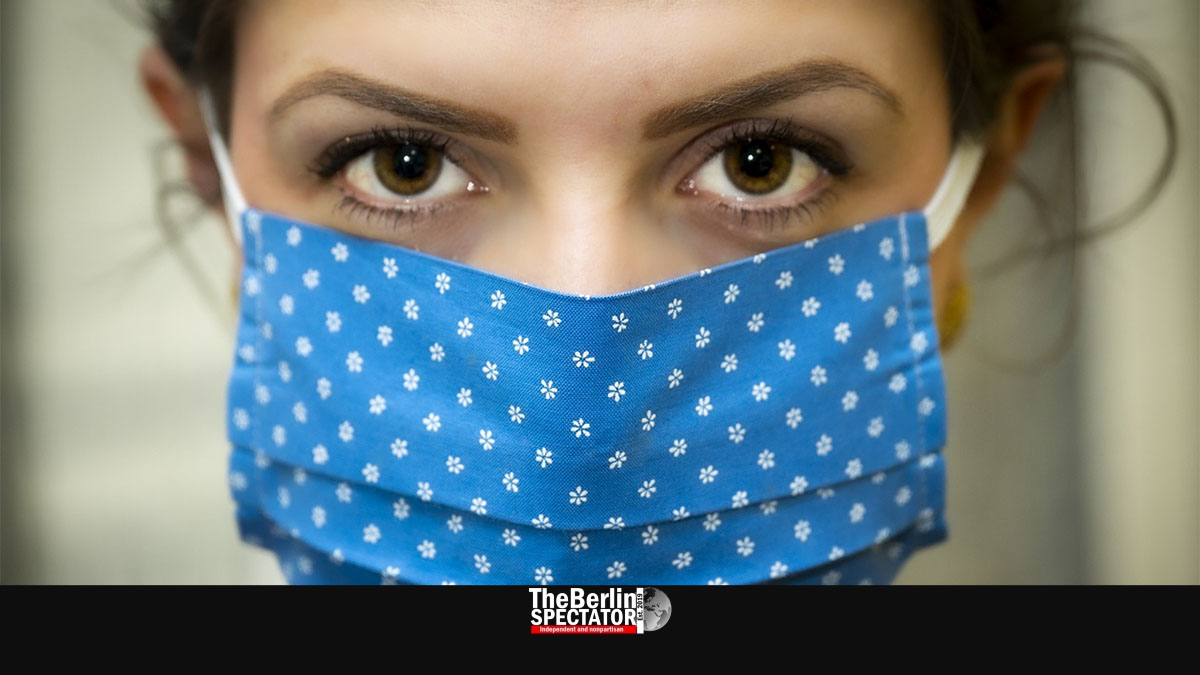 Is getting rid of the mandatory mask rule justifiable, or even necessary? Or would it be “campaigning at the expense of people’s health”? In Germany, the discussion about masks is in full swing.

Nijmegen, June 14th, 2021 (The Berlin Spectator) — When the Corona pandemic commenced in early 2020, Chancellor Angela Merkel said masks were “virus catapults”. Her government was ill-advised on the subject. For too long its position was that protective masks were not only not necessary, but harmful. Once everyone (with the exception of Corona deniers) knew the exact opposite was the case, Germany noticed it did not have the masks it needed.

So, millions of masks were ordered. When this was finally the case, another issue popped up: As it turned out, the entire world wanted masks. Big arguments erupted over masks made in Asia. At one point, in early April of 2020, Berlin’s Governing Mayor Michael Müller and Interior Senator Andreas Geisel accused the United States of America of having “confiscated” a big shipment of masks. They used harsh words when the order was rerouted to America for some reason, but apologized later.

Now that the Corona infection numbers are decreasing substantially, some politicians believe the mask can be decommissioned, at least outdoors. Even Germany’s Health Minister Jens Spahn believes an incremental end to the mandatory mask rule is possible. In a first step, the obligation to wear masks outdoors could be lifted, Spahn told the Funke Mediengruppe publishing house. In regions with very low Seven Day Incidences and high vaccination rates, this could apply indoors as well.

But, in case of doubt people needed to continue wearing masks, Spahn insisted in the interview. This needed to apply while travelling and during indoor meetings. Justice Minister Christine Lambrecht told the ‘Bild am Sonntag’ weekly, the federal states should establish, in what kinds of situations wearing masks was still necessary. The SPD’s health expert Karl Lauterbach said, getting rid of masks completely would mean campaigning at the expense of people’s health. He was referring to the elections for the Berlin Bundestag which will take place in three months and twelve days from now. The center-right FDP and the extremist right-wing AfD demanded an end to the mandatory mask room in all situations.

The discussion about ending the compulsory mask rule in Germany had been triggered by the latest decision the government in neighboring Denmark took. There, masks are not required anymore in most situations. Starting today, only individuals who stand in public transport vehicles need to wear masks. On September 1st, 2021, Denmark intends to dump the mask rule altogether. That is when Danish clubs and discotheques are supposed to reopen, meaning the tiny northern European country will be ‘back to normal’ soon.

Germany’s Corona infection numbers are encouraging. In eight out of 412 counties the country has, the Seven Day Incidence has reached zero. They are Flensburg, Neumünster (both in Schleswig-Holstein), Wesermarsch (Lower Saxony), Neustadt an der Weinstrasse, Pirmasens (both in Rhineland-Palatinate), Tirschenreuth and Bayreuth (both in Bavaria) and Prignitz (Brandenburg). Five federal states have one-digit Incidences. They are Brandenburg, Lower Saxony, Mecklenburg-Hither Pomerania, Saxony-Anhalt and Schleswig-Holstein.