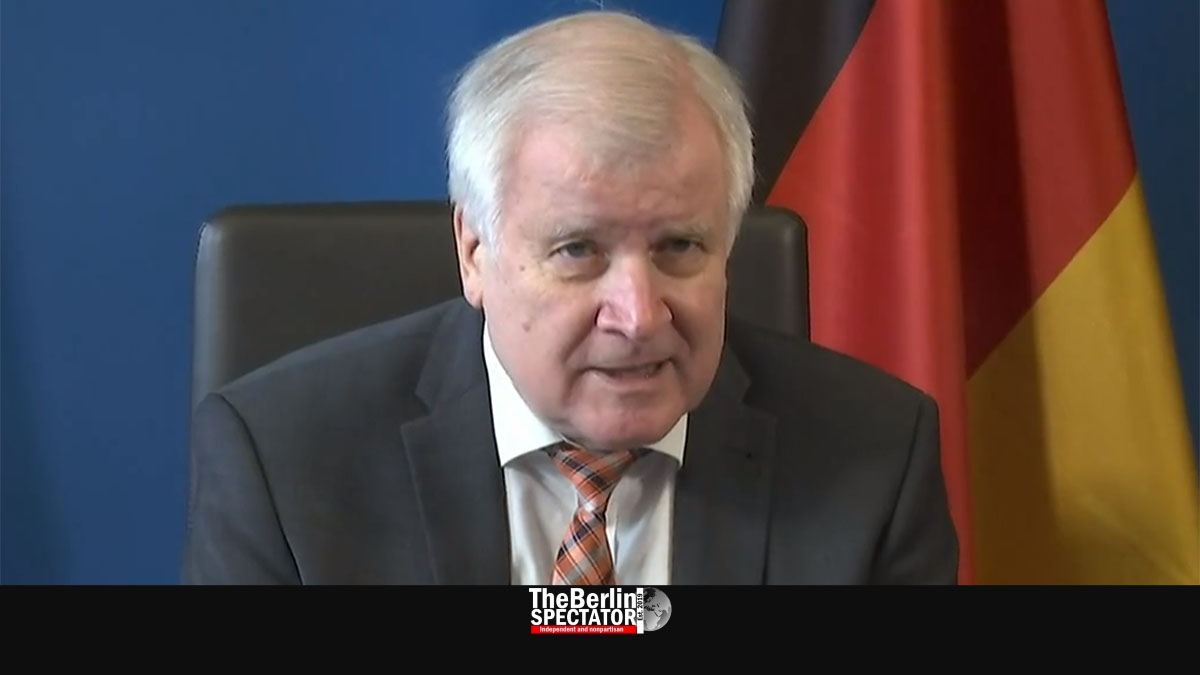 In Berlin, Interior Minister Horst Seehofer and Thomas Haldenwang, the President of the Federal Office for the Protection of the Constitution, introduced their latest report on extremism in Germany. According to Seehofer, the country is in an “alert situation”.

Berlin, June 15th, 2021 (The Berlin Spectator) — Germany’s Interior Minister Seehofer said there was a “varied threat to our liberal-democratic society”. This was “a big problem”. In spite of the fact that less people had been in contact with each other, because of the Corona pandemic, extremists in Germany had gotten a boost in 2020. Right-wing extremism and antisemitism are the main threat, according to the Minister.

In the latest extremism report released by the Federal Office for the Protection of the Constitution (BfV), it says the Corona pandemic had contributed to an increased threat. Right-wing extremists had put an effort into building contacts with the “civil spectrum” by joining the protests against the Corona rules. In spite of the fact that they had been a minority in those Corona denier protests, they had managed to put their stamp on the movement, Seehofer stated. He said he was worried about the fact that the other protesters had not distanced themselves from the right-wing extremists.

According to the report, the number of right-wing radicals grew by 3.8 percent to 33,300, compared to 2019. Criminal offenses within this spectrum increased by about 5 percent last year, violent crimes even by 10 percent. This is alarming indeed. The readiness to use violence within extremists on the right is high. A chapter on the ‘New Right’ is part of the report as well. Seehofer said its “pseudointellectual” members were trying “to shift the limit of what is sayable” in Germany.

Thomas Haldenwang explained extremists and terrorists had “relocated their anti-constitutional activities” to the Internet and their “home office”. In addition, right-wing extremists had spread conspiracy theories at Corona denier protests, with the goal of delegitimizing the state. Horst Seehofer said more people had joined the self-proclaimed ‘Citizens of the Reich’ who do not recognize the Federal Republic of Germany or its institutions. Here, the increase was 5 percent to about 20,000 persons, 2,000 of whom are prepared to use violence.

All extremist right-wing groups spread their propaganda via the Internet. Haldenwang also mentioned the radical right-wing party AfD. According to him, the extremist ‘Wing’ within the AfD, which was disbanded, officially, a while ago, is still active and in the process of “building new structures”. The AfD’s youth organization also had ideas which were unconstitutional.

Right-wing extremism was dominant in the “threat situation” Germany was in, Interior Minister Seehofer stated. But crimes committed by left-wing extremists were on the rise too. In 2020, there had been 6,632 offenses of this kind. The increase is 2.8 percent. Left-wing radicals had become more aggressive and disinhibited. About 9,600 left-wing extremists in Germany are prepared to use violence, the report say. Islamists pose yet another problem.