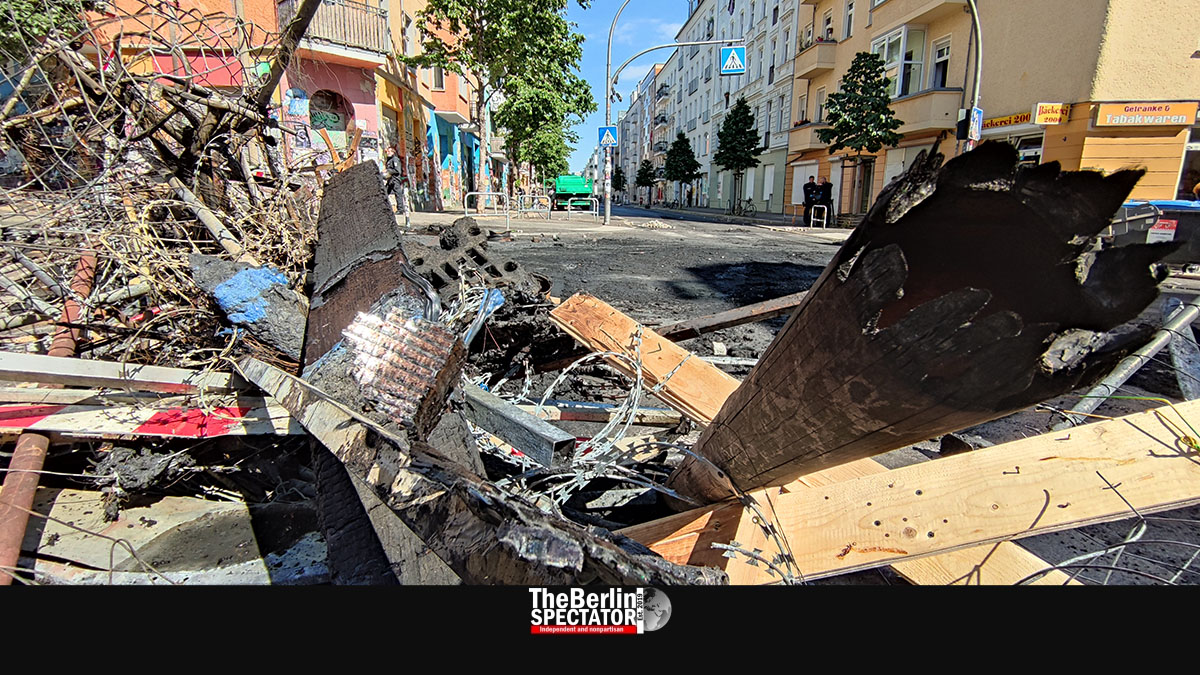 A day before fire safety experts are supposed to check an illegally occupied apartment block in Rigaer Strasse, left-wing radicals attacked police officers from roofs, by throwing stones and firecrackers at them. As many as 60 officers were injured.

Berlin, June 16th, 2021 (The Berlin Spectator) — Part of Rigaer Strasse in Berlin’s Friedrichshain district became a crime scene on Wednesday, when about 200 left-wing radicals threw cobblestones and bottles at police officers. First, they built barricades by placing parts of construction fences, wood and tires on the street and setting them on fire. Then the attack occurred from the roofs of several buildings. By about 2:00 p.m., the situation was under control again.

The police on site were preparing to protect fire safety experts who are supposed to enter and check a building occupied by squatters. Rigaer Strasse 94 is an infamous address in Berlin. The squatters there and their hundreds of supporters in the city cause trouble on a regular basis. This time, they do not want fire safety experts to enter the apartment block. Since they are known to be violent, a simple safety survey will become a rather large police operation.

Wednesday’s attack against the police is unprecedented in its brutality. Once the smoke had settled, literally, on Wednesday afternoon, the street looked like a war zone. The burning barricades had melted the asphalt at the intersection with Liebigstrasse, which was the location of another building occupied by squatters until the police evicted them by force in October of 2020. Melted plastic and wood was piled up on the street. So were the cobblestones the officers were attacked with.

Both the Berlin Police and the Federal Police are now guarding the entire vicinity. Only residents are allowed to pass. Protests on site are forbidden right now, because the authorities know what to expect from those events. Parked cars were towed away as the police were preparing for the fire safety inspection which is supposed to take place on Thursday morning. Because more attacks are expected, officers searched the roofs of all buildings in the neighborhood, for cobblestones and other items that could be used as weapons. According to the Berlin Police Department, no arrests were made after the latest attack, presumably because the perpetrators remained in the occupied building, which police cannot access unless they launch a major operation.

“People who set tires on fire are not fighting for open spaces used by left-wingers, but harass their own neighborhood”, Berlin’s Interior Senator Andreas Geisel stated. The residents in Rigaer Strasse 94 were not above the law, he said. Criminal offenses would be persecuted persistently and court decisions enforced, Geisel vowed.

Ahead of time, residents in the neighborhood around the occupied building were informed about restrictions. Those have nothing to do with Corona, but rather with the police operation on Thursday. On parts of Liebigstrasse and Rigaer Strasse, parking and protests are forbidden until Saturday. Access is very limited.