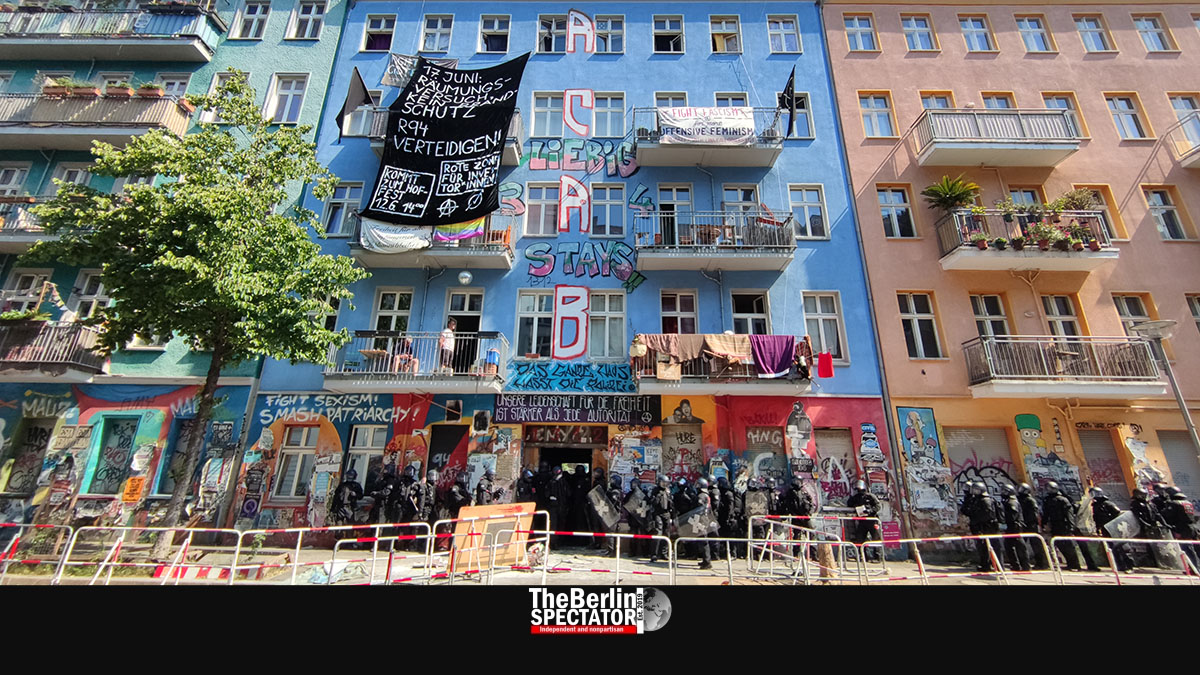 In Berlin’s Friedrichshain borough, hundreds of police officers were part of a big operation on Thursday. Its objective was to let a fire safety expert do his job. The police were attacked by the residents again.

Berlin, June 17th, 2021. Update: 6:20 p.m. CEDT (The Berlin Spectator) — Before 7:00 a.m., hundreds of police officers were in position at Rigaer Strasse. Their mission was to protect a fire safety expert who was supposed to check an apartment building part of which is being controlled by squatters. The left-wing radicals claimed the police was using fire safety as a pretext to vacate the building, while the authorities always stressed this was about fire safety only. In the end, issues arose because of the aggressive behavior of the squatters who attacked the police twice since yesterday.

“Everyone in this building hates the police”, it says on the apartment block, in big letters. After 8:00 a.m., as police officers were busy opening the main door using chainsaws and other tools, the residents played loud and aggressive music through a giant loudspeaker they had placed on a balcony. They also read statements about “the shitty system” and their freedom which they would defend “in the most radical fashion”. Just before, the squatters had finally agreed to giving access to the fire safety expert without police. Since he was not ready to enter the building without an escort, the operation began.

Once the officers were about to open the first entry door, radicals lit loud firecrackers and other pyrotechnical products. They attacked the police, yet again, by throwing color bombs at officers. In the building, they sprayed foam from a fire extinguisher into their faces. Afterwards, some officers had trouble breathing for a while, but refused to be treated and remained part of the operation. It took longer than an hour until the police had managed to open two entry doors and entered the building in full riot gear. The summer heat in Berlin did not make their job easier.

It did not take long until dozens of policemen and policewomen were covered in paint, due to the attacks against them. Some went through a neighboring building in order to gain access to Rigaer Strasse 94. They had to make sure the building was safe before the fire safety expert would enter. Because of attacks against the police in front of the same building on Wednesday, in the course of which 60 officers were injured, an investigation was launched.

On Thursday morning, 350 police officers were on site, including many from North Rhine-Westphalia who were helping their Berlin colleagues. Hundreds more were on duty in the area. The neighborhood around the occupied building has been blocked by police since Wednesday. Residents were allowed to pass, but only with a police entourage. During the operation, mothers from the neighborhood brought their children to the kindergarten. One of them explained the chaos to her kids by saying there was “a big and very long party”. At several police road blocks, dozens of the squatters’ supporters assembled and chanted radical left-wing slogans.

The fire safety inspection was completed on Thursday afternoon. According to the expert, there are some deficiencies, but none that require immediate action. Initially, the inspection was going to continue on Friday, but this does not seem to be necessary.

Berlin’s Governing Mayor Michael Müller condemned the attacks against the police. “The events in Rigaer Strasse show what the violent delinquents want. This is not about the political goal of providing affordable housing to people with little money, but about hard-core egoism.” Rules were ignored and an entire neighborhood was taken hostage, Müller stated. He accused the squatters of hating the nation of law. With contempt for mankind, they had attacked police officers and firefighters.

On Thursday afternoon, President Frank Walter Steinmeier commented on the violence the extremist residents at Rigaer Strasse 94 were responsible for. He did so in a letter he sent to the police officers involved in today’s operation. The violent action was complete unacceptable and required an unambiguous reaction by the nation of law, Steinmeier wrote. He thanked the police for their efforts.

In the meantime, the Berlin Police Department is looking for witnesses who may have filmed the events at Rigaer Strasse on Wednesday, when the police were attacked. Anyone with photos or videos that show the violence or those responsible were asked to come forward.