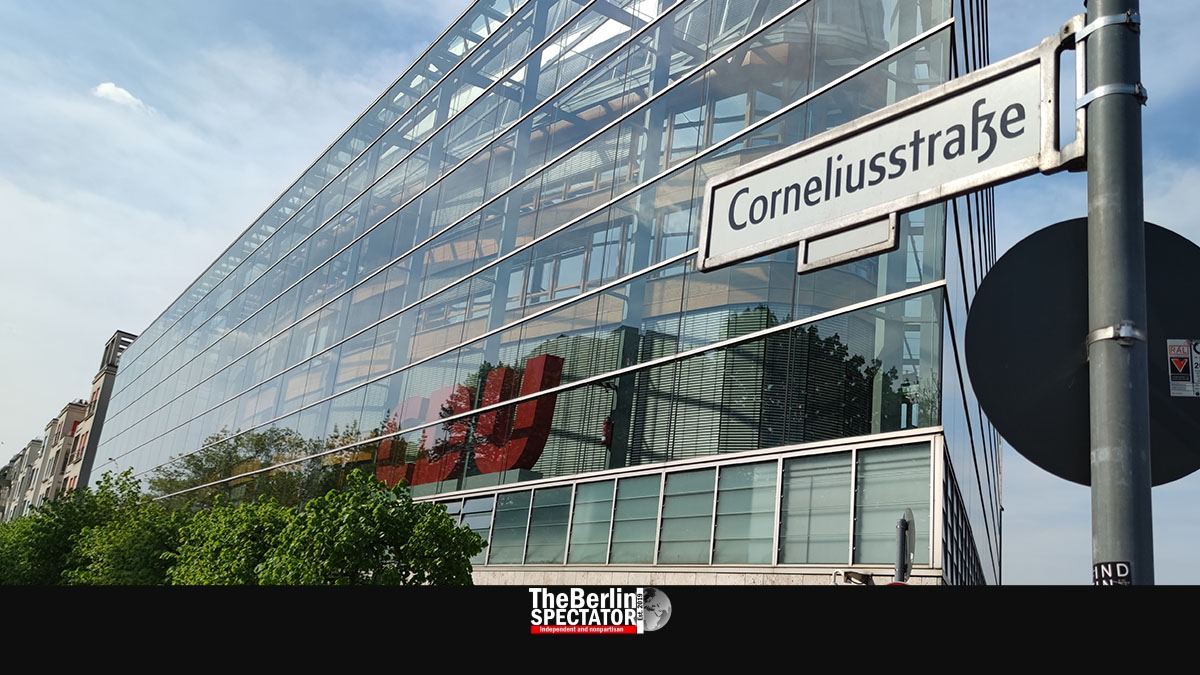 Ninety-seven days ahead of the general elections, Germany’s conservative ‘union parties’ CDU and CSU introduced their election manifesto. “Stability and renewal” is what they want. The new program marks the beginning of the post-Merkel era. Guess how many times today’s Chancellor was mentioned in the new election program.

Berlin, June 22nd, 2021 (The Berlin Spectator) — On 139 pages, the Christian-Democratic Union (CDU) and its Bavarian version Christian-Social Union (CSU), are telling potential voters what their approach will be once their icon Angela Merkel, who has governed Germany for 16 years, leaves in fall or winter, depending how long it will take to put together a new government coalition after the elections.

The reactions vary. Some Germans do see a convincing manifesto. The opposition, on the other hand, slammed the ‘union’. The new program was “unfair and antisocial”, the conservatives’ biggest competitor Annalena Baerbock said shortly after it was released. She is the Greens’ candidate for Chancellor and must be a fast reader. “The ‘union’ obviously wants to continue as before”, she stated. Would this be so bad? According to Mrs. Baerbock it is. “Their motto is ‘Grit your teeth and get to it!'”, the Green contender added.

Of course, the center-left Social Democrats (SPD) criticized their coalition partner CDU/CSU as well. Norbert Walter-Borjans, one of two SPD chairpersons, said the CDU’s program was “a bitter disappointment”. What the conservatives called an unleashing of the economy actually was a maceration of employees’ rights and ecology guidelines. Lars Klingbeil, the SPD’s chief secretary told the channel ‘n-tv’, he was relieved the grand coalition would come to a close soon.

CDU and CSU, on the other hand, are proud of their new manifesto which they released only 97 ahead of the elections for the Berlin Bundestag. “We want a modern Germany which sticks together and gives all people who live here peace and security”, the CDU’s new chairman Armin Laschet said in Berlin. He and the CSU’s boss Markus Söder demonstrated unity, a few weeks after their rather ugly fight for the candidacy for Chancellor, which Laschet won. “We have many good ideas”, he assured his audience. Those who would rather judge the election program for themselves can always read those 139 pages in the language of Goethe and Schiller, and of Laschet.

The ‘Program for Stability and Renewal’ starts with foreign policy, a field which the ‘union’ used to place at the bottom in earlier manifestos. Strengthening Human Rights across the globe is included. So are “stability in all of Europe” and good relations with the United States of America. “With President Joe Biden, we connect an opportunity for a new start for the transatlantic relations”, it says on page 8.

A commitment to Germany’s “special responsibility towards Israel” is being mentioned two pages later. “Israel’s security and right to exist are part of Germany’s raison d’état”, the manifesto reads. “The people in Israel have the right to live without fear, terror and violence. That is why we support Israel’s right to defend itself.” Germany’s two conservative parties also want to make sure Iran adheres to its obligations under the ‘Iran Deal’. And they want a two-state solution the Palestinian leaders have been rejecting all along. Laschet, Söder and their people intend to deal with Russia in a “constructive and determined way”.

One of the reasons why the German conservatives will probably win the elections on September 26th, 2021, is the competence many voters believe they have in the field of the economy. Jump-starting it after Corona is what they want to do. According to the latest polls, some 28 percent of all voters intend to go for the ‘union’. Had Söder become candidate for Chancellor, they would possibly have been stronger. But a lot can change in the next 96 days.

In the new election program, today’s Chancellor Angela Merkel is being mentioned once: “With convinced Europeans such as Konrad Adenauer, Helmut Kohl, Franz Josef Strauss, Theo Waigel and Angela Merkel, we have shaped the European unity”, it says on page 18.