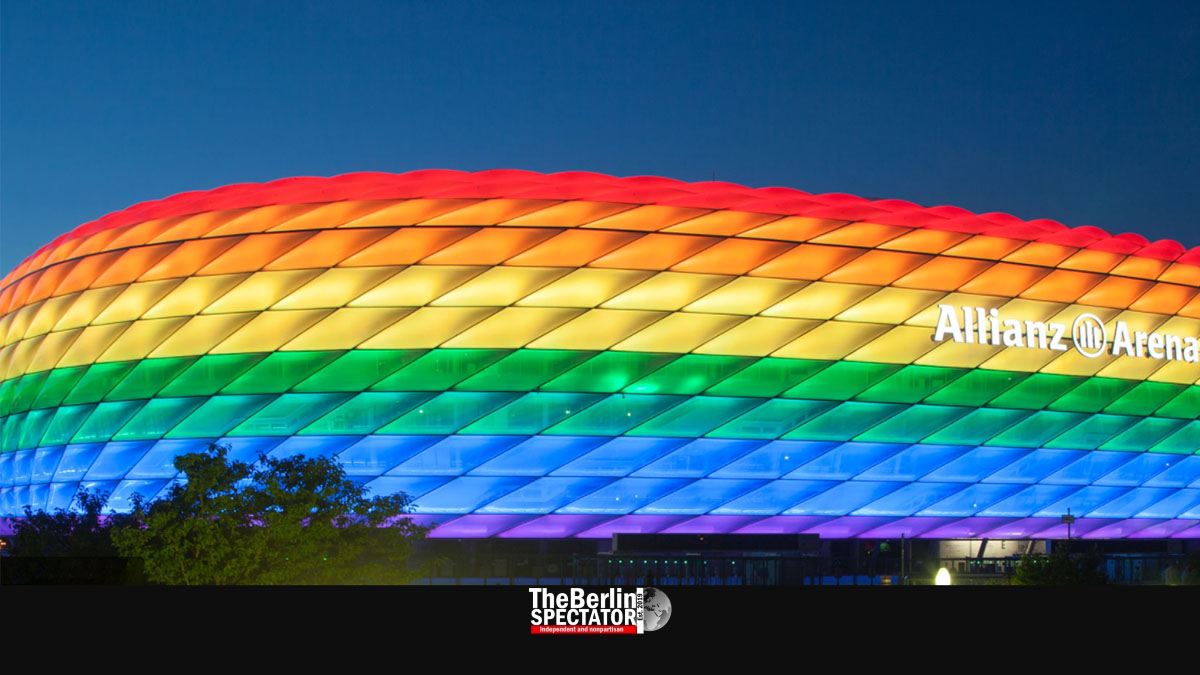 The UEFA does not want Munich to make the Allianz Arena shine in the colors of the rainbow during a soccer match tonight. Showing solidarity with the Hungarian LGBTI community would have been the purpose. German politicians are upset.

Berlin, June 23rd, 2021 (The Berlin Spectator) — Just a few days ago, the Hungarian parliament passed a homophobic law. Schools may not teach their students about homosexuality anymore. On Hungarian television, films that address the subject may only be shown late at night. Hungary is not the only Eastern European country that discriminates the LGBTI community, but the parliament’s decision is scandalous in the eyes of many, including conservative politicians in Germany. Many soccer fans are disappointed too.

On Tuesday at 10:57 a.m., the Union of European Football Associations (UEFA) announced its decision to dismiss Munich’s request for the permission to make the Allianz Arena shine in the colors of the rainbow during the soccer match between Hungary at Germany which commences at 9:00 p.m. today. The light would have set an example against homophobia. It would have shown the members Hungary’s LGBTI community they are not alone. And it would have been a sign of protest against the approach the parliament in Budapest is taking.

In Germany, a lot of criticism has been voiced. Both the UEFA and the German Football Association (DFB) were slammed. Munich’s First Mayor Dieter Reiter said it was disgraceful that the UEFA “does not let us set a sign for diversity, tolerance, respect and solidarity”. He stated the DFB disappointed him as well because it had not been willing to use its influence in this conflict.

Reiter said on the one hand he liked the idea of making the stadium shine in the colors of the rainbow anyway, in spite of the UEFA’s decision, but added that taking unlawful action was not really an option. The Mayor dismissed the UEFA’s suggestion to make the Arena shine on another day as “ridiculous”. The Allianz arena has a contract with the UEFA.

On Tuesday, the Union of European Football Associations had justified its decision by saying it was a neutral organization in regard to politics and religion. Munich’s application had had a political context because it would have been a reaction to a decision taken by the Hungarian parliament. For that reason the organization had been forced to dismiss the application. Critics are convinced the UEFA chickened out of a conflict that needs to be faced.

Bavaria’s First Minister Markus Söder, a conservative, stated the lights would have been a “very good sign for tolerance and freedom”. For the center-left Greens, their candidate for Chancellor Annalena Baerbock said an example for diversity needed to be set. “For tolerance and against homophobia!”, she twittered. This was not only about soccer. “Let’s carry the rainbow flag through this country!”, Baerbock suggested.

In other German cities, stadiums will be lit in the colors of the rainbow tonight. Some soccer fans might come to the stadium in clothing that resembles those colors. On social media, calls for this kind of approach are being spread.