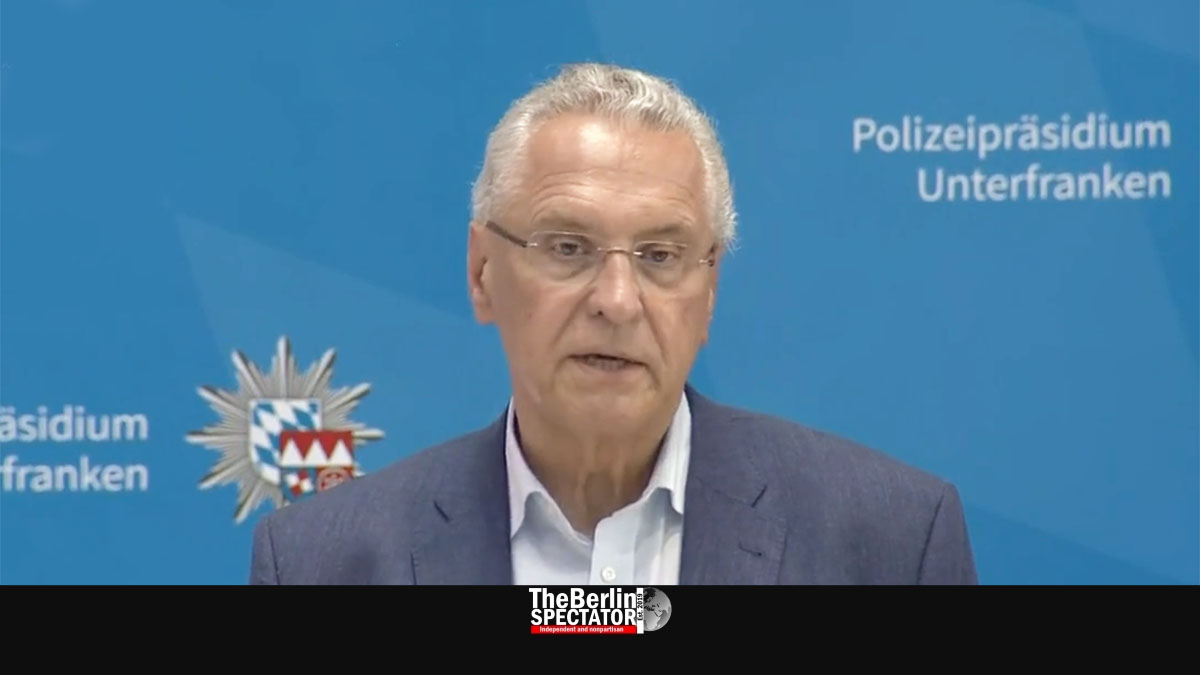 On Friday, a 24-year-old asylum seeker from Somalia killed three women in Würzburg and injured seven others with a knife. Neither psychological issues nor an Islamist motivation have been ruled out by the authorities.

Berlin, June 27th, 2021 (The Berlin Spectator) — What Bavaria’s Interior Minister Joachim Herrmann (photo at top of page) had to say after a terrible attack in Würzburg, which left three people dead and seven injured, was sad and scary at the same time. He stated he was “shocked and shaken” about the “terrible crime” that had been committed. The motive had not been established yet, he explained. At this stage, it was unclear how much psychological aspects had been involved and whether an “Islamist attitude” had played a role.

Herrmann stated a person who had witnessed the crime at a department store in Würzburg had said the attacker had shouted “Allahu Akbar” during the deadly attack. There had been more “possible clues” that might point towards a “radical disposition.” The Minister said the investigators were looking into these and all other aspects. During a search at the suspect’s accommodation, a cell phone and “written material with messages of hate” had been found.

According to Joachim Herrmann, the authorities in Bavaria believe the perpetrator did not have accomplices. He said, in some cases it was impossible to separate psychological issues from ideological motives. The Interior Minister thanked all police officers, emergency doctors and medics who had rushed to the crime scene to help. His thoughts were with the victims’ next of kin, Herrmann said at a press conference.

The perpetrator, a 24-year-old man from Somalia, is behind bars. He is being charged with murder in three cases and aggravated battery. On Friday at 5:00 p.m., he had entered a department store in the Franconian town of Würzburg, where he asked a staff members were “the knives” could be found. He took one and started his attack. First he injured the woman who had shown him where the knives were. She died at a hospital shortly after. The next person he attacked was an elderly lady. Then, he also stabbed a 24-year-old woman in front of her child. They died as well. A 15-year-old girl he injured is still in a life-threatening condition.

Four minutes after the deadly attacks commenced, the police received the first calls. Only two minutes later, the first officers arrived at the scene. At this moment, the suspect was already stabbing more women on the street in front of the department store. A group of passers-by stopped the attacker and made sure he could not escape. At 5:07 p.m., a police officer disabled him by shooting him in the leg.

The attacker is an asylum seeker from Somalia. He was staying in Germany legally. Weeks before the attack on Friday, he had attracted the attention of the authorities before, because of another incident which involved a knife. But in this case nobody was killed or injured. Back then, the suspect was taken to a psychiatric ward. Later, he was released.

Bavaria’s First Minister Markus Söder thanked a the “citizens” who had stopped the attacker. Their action had been “impressive”. Söder said the attack was “shocking”. Bavaria was mourning the victims and praying for the injured and their families. Söder announced flags in the federal state would fly at half-mast until Monday night.

“The terrible act of violence in Würzburg shocks us”, Germany’s President Frank Walter Steinmeier stated. The perpetrator had acted with a lot of brutality. He was being held accountable “by the nation of law”, Steinmeier said. All of Germany was mourning the victims. The President also thanked the police, doctors and medics who had come to the scene and helped victims. “Our thoughts are with those who lost their loved ones.”

Chancellor Angela Merkel’s spokesman Steffen Seibert said the investigation would show the motives the attacker had had. His “horrible crime” had been directed “against humanness and any religion”. Germany’s main candidates for Chancellor in the upcoming elections for the Berlin Bundestag reacted in similar ways.