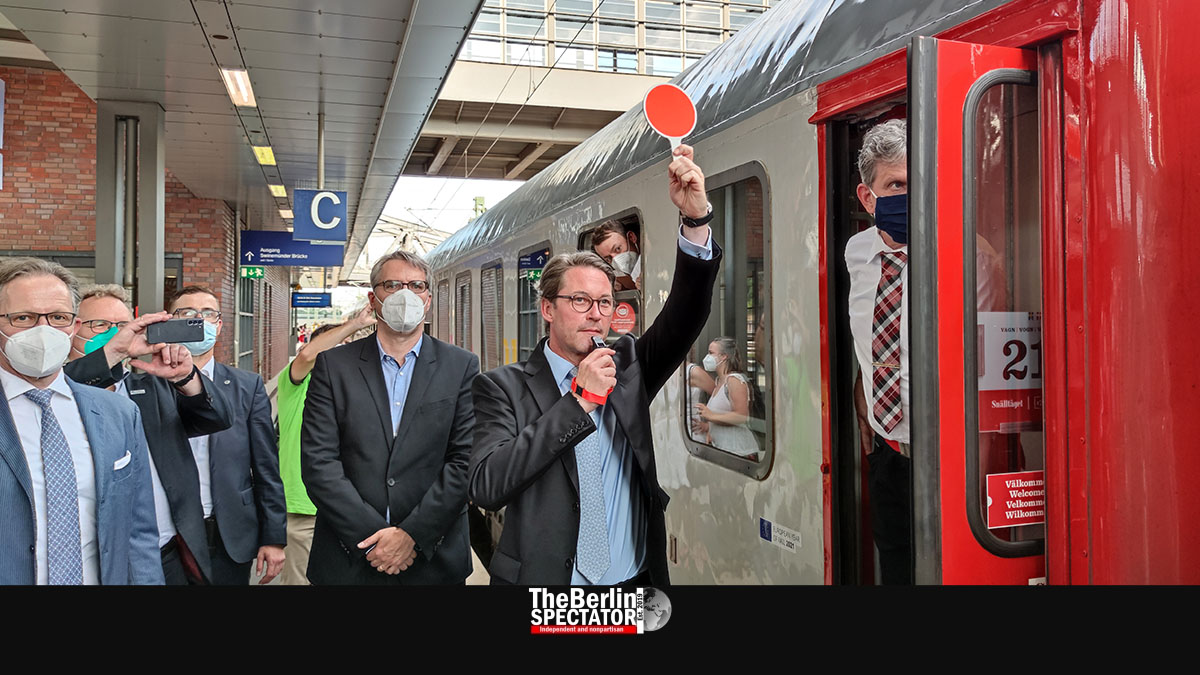 The train that left Berlin’s ‘Gesundbrunnen’ station for Stockholm at 6:54 p.m. on Monday evening was not just any train. It was important enough to be seen off by Germany’s Transport Minister Andreas Scheuer.

Berlin, June 29th, 2021 (The Berlin Spectator) — Why fly from Berlin to Stockholm in two hours if you can do it in nineteen and a half instead, by train? The first direct night train between these two cities in 25 years came in at 8:52 a.m. on Monday. From Berlin’s Gesundbrunnen station, it was sent back to where it had come from yesterday evening. At exactly 2:20 p.m. today, it is supposed to reach Stockholm.

None other than Transport Minister Andreas Scheuer came to play the conductor and wave goodbye. He was joined by Per Thöresson, Sweden’s Ambassador to Germany. They both know that, when it comes to train travel, the past is the future. Old-fashioned trains like the one the private operator Snälltåget uses for its new connection between Berlin and Stockholm are a lot slower than planes. But they do not burn kerosene and they are not nearly as loud as a Boeing 737 or an Airbus A320.

Snälltåget purchased a second hand train for this purpose. It must have been driven back and forth in Sweden for at least thirty years before it ended up in Berlin. Millions of miles are definitely on its belt. But this aspect does not make it less comfortable. The distance from Gesundbrunnen to Stockholm Central is 1,043 kilometers (648 miles). And yes, considering the distance, the trip is rather long. There are advantages though.

The passengers are supposed to sleep during the first half of the trip, in pretty neat couchettes. Secondly, the price is right. Besides, this is the only direct train available. Sure, Deutsche Bahn offers connections from Berlin to Stockholm. But, in this case, passengers have to change trains between three and six times, depending on when they are leaving. Also, the regular price is 255 Euro (304 U.S. Dollars or 219 Pounds Sterling). Snälltåget, on the other hand, gets them there for 999 Kronor (98 Euro, 117 Dollars or 84 Pounds). In both cases, there are special offers for those who book early enough.

What a trip! From Berlin, these night trains go straight to Hamburg. From there, they head north towards Høje Taastrup, which is located close to Copenhagen. By the time the passengers have their third cup of coffee at 7:40 a.m., they will be in Malmö. Lund and Eslov are next. From Hässleholm and Alvesta, the train continues on to Nässjö, Lingköping and Norrköping. Does it stop in Södertälje too? Sure. Let’s pretend we know all of those places. Everyone will admire us for being so polyglot. Then, finally, at 2:20 p.m., they will be in the heart of Stockholm.

Ready for the bad news? This night train connection offers its daily service between Berlin and Stockholm until September 4th, when the summer holidays are over. From that day until late October, they will run a weekly train between those two European capitals. But Deutsche Bahn intends to jump on the bandwagon again too, by adding more night train connections to destinations in Europe. Traveling the eco-friendly way is modern, and it makes sense. By the way: Snälltåget says it uses energy from regenerative sources.

On Monday, Transport Minister Andreas Scheuer enjoyed blowing the whistle to signal the train’s departure. “In the European year of the train, 2021, Snälltåget is an important signal”, he stated. The company name may sound Swedish, but it is owned by the German-French company Transdev Group. By the way: Do you feel like having some Köttbullar? Snälltåget’s trains do have restaurant cars. There is no need to go to Ikea for those delicious meatballs. Bon appétit.