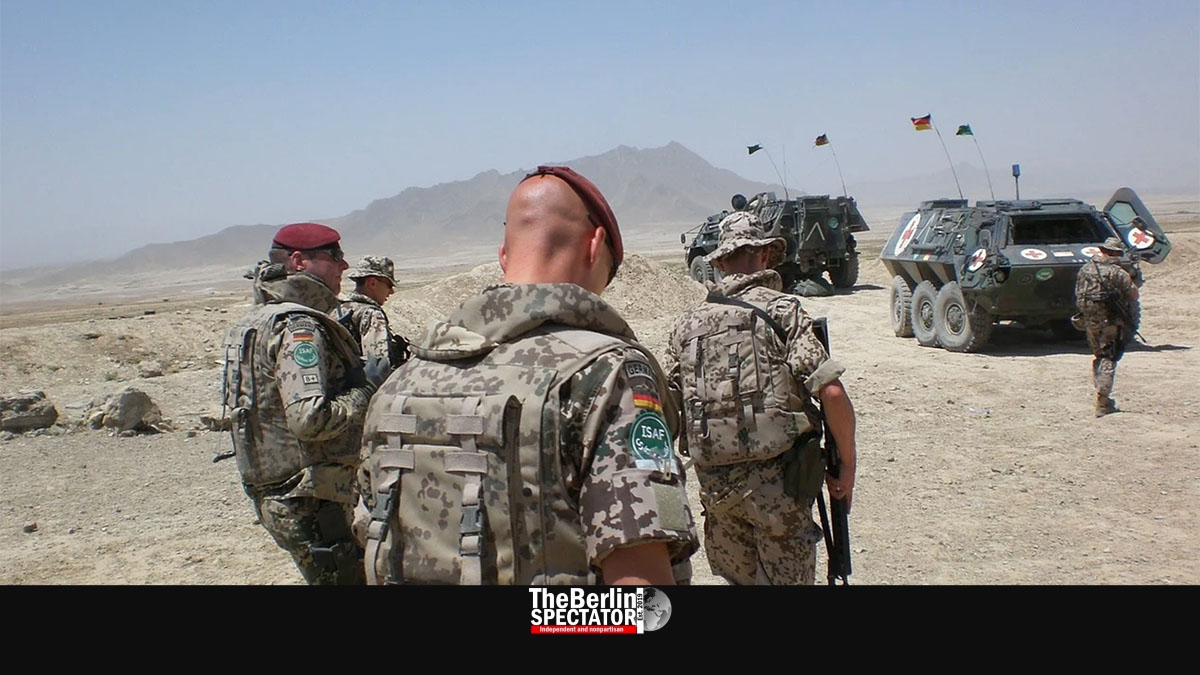 It has been 20 years. After the attacks of September 11th, 2001, the Bundeswehr, Germany’s Armed Forces, joined the U.S. Army in its war against terror in Afghanistan. On Tuesday night, the last soldiers left.

Berlin, June 30th, 2021 (The Berlin Spectator) — On September 12th, 2001, at 9:00 a.m. CEDT, only hours after the attacks which brought down the two towers of the World Trade Center and killed almost 3,000 people in New York City, at the Pentagon in Arlington/Virginia and on a field in Pennsylvania, Germany’s Chancellor Gerhard Schröder took part in the 186th session of the Berlin Bundestag. He told the MPs he had just promised U.S. President George W. Bush Germany’s “unconditional solidarity”. That morning, Schröder stressed those two words by repeating them.

It did not take long until the German Bundeswehr followed the U.S. Army and other partners to Afghanistan, where the Islamist Taliban were accused of harboring terrorists, including Osama Bin Laden. The Americans would never find him there. He was tracked down and killed by Navy SEALs in Pakistan on May 2nd, 2011. In the meantime, the difficult mission in Afghanistan continued, without success. Now that the anti-terror coalition is leaving after two decades, the Taliban are taking over the areas they vacate. There is no victory, no happy end and no peace.

Germany had help during its pullout from Afghanistan. The U.S. Army provided assistance by sending C-17 aircraft to fly out German soldiers and some of their equipment to Tiflis in Georgia. The last freighter to leave the former German camp was an Airbus M400 owned by the German Air Force. Camp Marmal in northern Afghanistan was vacated on Tuesday night, when the last 250 German soldiers left. At 10:00 p.m. local time, the last aircraft was gone.

Defense Minister Annegret Kramp-Karrenbauer (AKK) had sent the Bundeswehr’s elite unit KSK to support the pullout. In order to reduce the risk of Taliban attacks, the planes that flew out those soldiers switched off their transponders, meaning they could not be tracked by radar. The mission in Afghanistan had been a “historic chapter”, AKK stated. She thanked the more than 150,000 who had been part of the mission during those 20 years.

The Minister said they could be proud of their achievements. “With professionalism and dedication”, they had completed all missions the parliament had tasked them with. During those 20 years in Afghanistan, 59 German soldiers died there. Thirty-five of them were killed in battles or attacks. At times, up to 1,300 Bundeswehr soldiers were in Afghanistan at once. Apart from their main camp in Mazar-i-Sharif, they ran two smaller ones in Kunduz and Fayzabad.

Under former President Trump, the United States of America began preparing their pullout from Afghanistan in early 2020. Today’s U.S. President Joe Biden wanted to complete it by September 11th, 2021, the 20th anniversary of the terror attacks. But things were accelerated. It might even happen before Independence Day, which will be celebrated in five days from now.

Now that the German pullout is completed, there will be a small military ceremony at Wunsdorf Airbase in Lower Saxony later today. Initially, the Bundeswehr soldiers who are returning right now were supposed to go into quarantine because of the danger posed by the spreading Delta variant of the Coronavirus. But the Defense Ministry changed its mind. Corona tests for all returning soldiers are supposed to suffice.