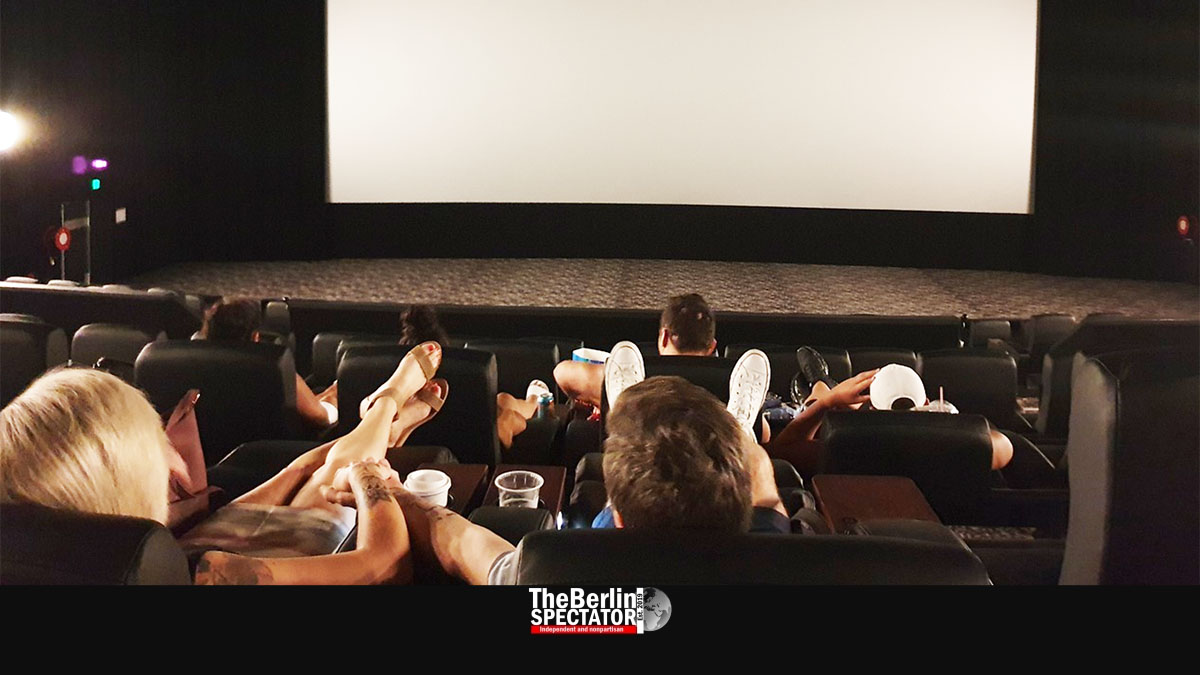 With the reopening of movie theaters in Germany, another step towards normality is being taken today. Since the third Corona wave hit in November, cinemas had been closed. A long break is finally over.

Berlin, July 1st, 2021 (The Berlin Spectator) — The big moment has arrived. As of today, cinemas are back. Even the weather is perfect for the reopening of hundreds of cinemas. It is raining all over the country, meaning people will stay away from beer gardens, public swimming pools and return to the movie theaters. Since Germany’s national soccer team was beaten and literally kicked out of the European Football Championship on Tuesday, those matches will not distract the audiences that much anymore either.

For eight months, Netflix, Amazon Prime, similar streaming services and television had been the only sources for motion pictures. But the more flicks Germans watched on their laptop computers while falling asleep, the more they missed going to the movies at cinemas. Experiencing movies in large audiences on giant screens is very different. Besides, an evening at the movie theater usually includes a dinner beforehand and drinks afterwards.

A few weeks ago, once they knew the Corona rules would be eased further, the associations of film distributors and movie theater owners in Germany agreed on a mutual date for the reopening of cinemas. This date is today. It would not have made too much sense to have different reopening days in the country’s sixteen federal states, also because movie premieres are supposed to be nationwide. Starting today, Robert de Niro’s new flick ‘The Comeback Trail’, a comedy the Germans call ‘Kings of Hollywood’, will be screened all over the country.

On June 4th, 2021, movie theaters in Berlin got the permission to reopen. But hardly any of them did because their audiences would have been limited to 100 people. The maximum was just increased to 500, which is why most of Berlin’s 92 cinemas will indeed open today. In neighboring Brandenburg, 1,000 people may enter movie theaters at the same time. But hardly any theaters are this big.

Of course, strict Corona rules apply. People need to be fully vaccinated when they enter. Or they need to show negative Corona test results from the same day. If there are more than 250 people in the audience, they need reserved seats. Also they have to leave their contact data, just in case there is a Corona outbreak. Masks (FFP2 standard) are mandatory, but they may be taken off at the seat. All of this is still better than watching movies on laptop PCs in bed alone. Besides, it will take a while until ‘Nomadland’ is on Netflix.

Many reopening steps were taken in Germany in the past few weeks. In the meantime, the infection numbers are still decreasing. According to the Robert Koch Institute in Berlin, Germany’s Seven Day Incidence now stands at 5.1.