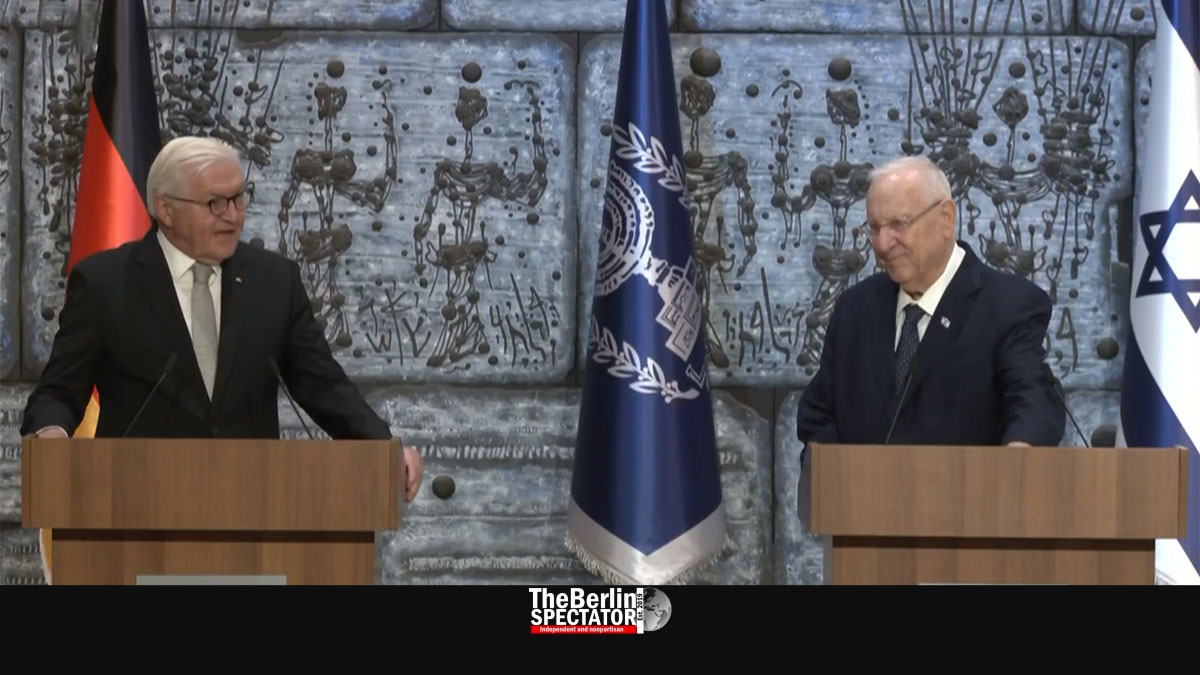 Germany’s President Frank Walter Steinmeier ends his visit to Israel today. In Jerusalem, he met the departing President Rivlin, his successor Herzog and Prime Minister Bennett. Many issues were discussed, including antisemitism and the danger posed by Iran and its proxy in Gaza.

Berlin, July 2nd, 2021 (The Berlin Spectator) — In Jerusalem, Germany’s President Frank Walter Steinmeier promised Israel a continuation of the partnership between the two countries. “Germany will continue to stand by Israel’s side and Israel can count on my country’s friendship”, he stated at a state dinner he was invited to by his departing colleague Reuven Rivlin, “no matter how quickly the world is changing, and no matter who will be Chancellor soon.”

“We came here at a special moment”, Steinmeier said at a press conference with Rivlin. He said there was a new beginning in Israel. Of course, he was referring to the new eight-party government coalition in Jerusalem. “In Germany, we are experienced with government coalitions, but we are observing the one in Israel with a lot of interest.” Steinmeier said the main subject of his talks with Prime Minister Naftali Bennett and Foreign Minister Yair Lapid would be the question what kind of perspectives would arise for Israel’s domestic policy.

The situation in and around Israel would be discussed as well, the German President stated ahead of his meeting with Israel’s new head of government. “In the past months we have noticed that the Israeli-Palestinian conflict is not becalmed at all”, Frank Walter Steinmeier said in Jerusalem. “Of course, Israel has the right to defend its existence”, he stressed. It was obvious that the conflict was not vanishing. “The old sentence we have always said is still accurate: There will not be a good future without a political solution. I have not heard of alternatives to the Two-State Solution.”

Steinmeier added there needed to be a perspective. At this moment, it was important to “build a minimum of trust between the new Israeli leadership and the Palestinian side”. The German guest said he was aware of the fact that the path towards a resumption of talks about the big questions could only work on the basis of small steps that needed to be taken towards a cooperation. “Iran’s destabilizing role in the region” would be discussed too, Steinmeier announced in the morning. “With all means at our disposal” Iran needed to be prevented from acquiring nuclear weapons, he said.

President Steinmeier conceded there was a discord on the question how this goal could be achieved. While Germany insists on saving the agreement known as the Iran Deal, Israel has opposed it all along, saying it would provide the Teheran regime with billions it would use to spread even more terrorism.

Seventeen months ago, Steinmeier took part in three events that commemorated the 75th anniversary of the liberation of Auschwitz. One took place at the Berlin Bundestag, another at the former German death camp in Auschwitz and one in Yad Vashem, Israel’s memorial for the six million Jews who were murdered during the Holocaust. On Thursday, he stated he knew he had been part of the Yad Vashem event “because an Israeli President had the courage to invite me”. He meant his good friend President Reuven Rivlin who will end his term in five days from now.

On Thursday, Frank Walter Steinmeier also mentioned antisemitism. Commemorating the victims of the Holocaust, fighting antisemitism or siding with Israel would never be “an empty ritual”, he stressed. He conceded that hatred towards Jews was spreading “on German streets and everywhere in the world.”

Rivlin said he had opposed Israel’s diplomatic relations with Germany when he had been a law student, decades ago. Now, the fact that the German President was the last head of state he was hosting was symbolic. In spite of disagreements, Israel and Germany were partners in the fight against Teheran’s intention to acquire nuclear weapons, against Hamas, Hezbollah and Islamic Jihad.

President Steinmeier’s visit to Israel also included a meeting with the country’s new President Isaac Herzog. The German guest is being accompanied by quite an entourage which includes Josef Schuster, the President of the Central Council of Jews in Germany, and the Jewish show host and actor Daniel Donskoy. Israel’s Ambassador to Germany Jeremy Issacharoff took part too. Today, Steinmeier will return to Berlin. Because of the Corona pandemic, the visit had been postponed twice.