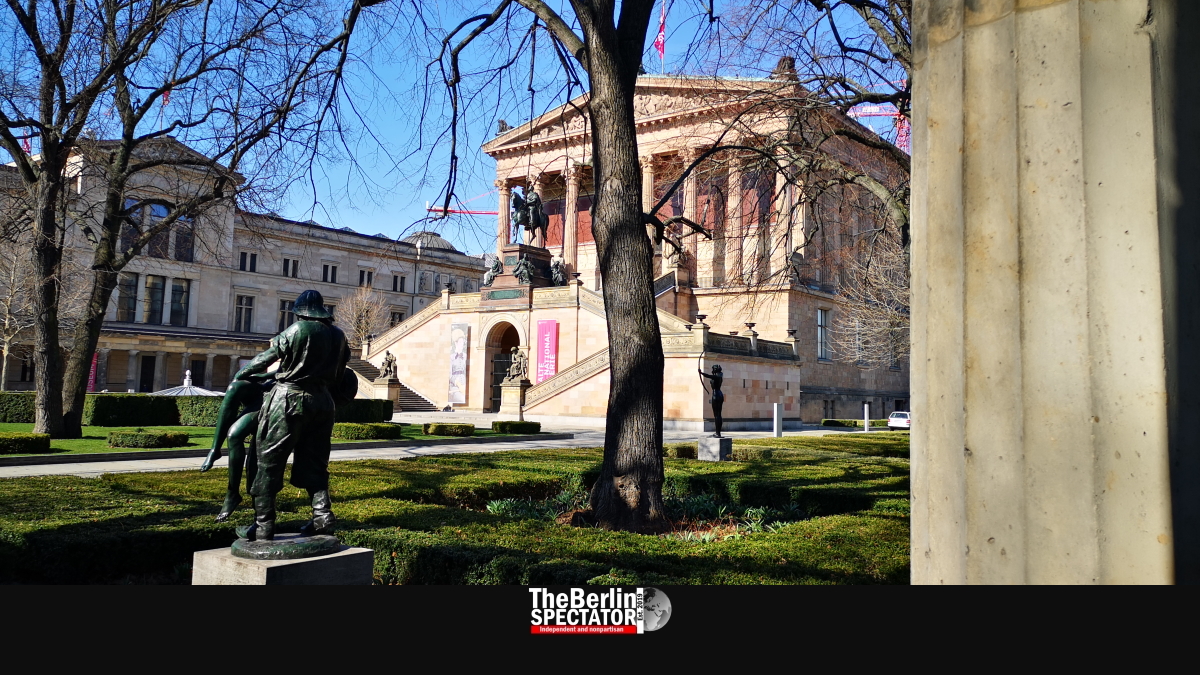 Because of the Corona pandemic, this year’s ‘Museum Sundays’ had to be postponed. The first one takes place today. Sixty-one museums take part.

Berlin, July 4th, 2021 (The Berlin Spectator) — The Smithsonian Museums in Washington D.C. are stunning. Some have already reopened, months after the Corona pandemic had forced them to close, others are scheduled to reopen later this month. No matter whether it is the Hirshhorn Museum and Sculpture Garden, the National Museum of Natural History or the National Air and Space Museum, visitors will be fascinated. Besides, they will not have to pay a single dime. Admission is generally free 365 days per year.

Free admission at museums is generally a good idea, because this kind of approach lets poor individuals enter them too. This approach provides culture and education to absolutely everyone. The state pays the bills.

Exactly 6,706 kilometers (4,167 miles) east, in Berlin, things are different. At the ‘Alte Nationalgallerie’, a regular ticket is 10 Euro. The same applies to the ‘Bode Museum’ next door. A museum day can become quite expensive. As a result, people stay away to save money, or because they just cannot afford it. At least there is something called ‘Museum Sunday’. From July until December of 2021, admission to 61 museums is free on the first Sunday of the month, including today.

Nobody has ever managed to visit and really look at 61 museums on one and the same day day, but doing it step by step, once a month, makes sense. The ‘Deutsches Historisches Museum’ offers quite a few interesting exhibitions, including ‘Divinely Gifted: National Socialism’s Favored Artists in the Federal Republic’. “Many renowned protagonists of the National Socialist art scene continued to be active as full-time visual artists after 1945”, the museum says. “They were able to profit from the anti-modernist climate that still prevailed in the immediate post-war decades.” This exhibition deals with this important piece or art history.

Or how does ‘Cosmic Culture – Soviet Space Aesthetics in Everyday Life in the East’ sound? This exhibition can be visited at the ‘Deutsches Technik-Museum’. It presents photographs by Dieter Seitz on the occasion of the 60th anniversary of Yuri Gagarin’s space flight. At James Simon Gallery, the exhibition ‘Akhmim – Egypt’s Forgotten City’ is definitely more than interesting. Berlin’s museums offer so much. On ‘Museum Sunday’, they do so for free.

Many important museums take part, including the Jewish Museum, the Anne Frank Center, the ‘Berlinische Gallerie’, which is the Museum of Modern Art, the ‘Georg Kolbe Museum’, the ‘Museum für Naturkunde – Leibniz Institute for Evolution and Biodiversity Science’ and the ‘Neues Museum’, just to name some of them. Did we mention 61 museums in Berlin are part of the ‘Museum Sunday’ deal?

The downside? These are Corona times, which means time slot tickets need to be reserved via the ‘Museum Sunday’ website. For today, most or all tickets might already be gone. But how about going next month?