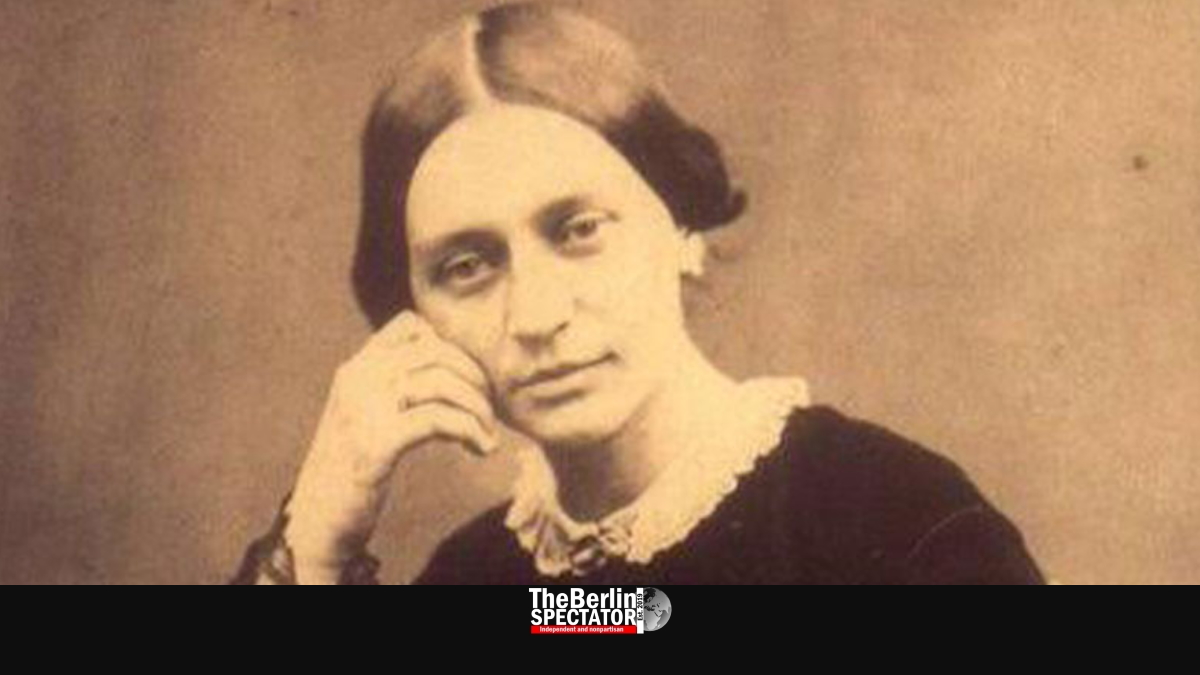 According to Edvard Grieg, Clara Schumann was “one of the most soulful and famous pianists of the day”. As a composer, she was admired as well. In the past five decades, the pieces she wrote were rediscovered and interpreted a lot.

Berlin, September 13th, 2019. Update: July 4th, 2019 (The Berlin Spectator) — Friedrich Wieck was a very determined man. The theologist was into music so much that he started studying the piano intensively. His first wife Marianne, a pianist and singer, probably was a big influence on him. In this constellation, they had five children, three sons and two daughters, the second of which was Clara.

Once she was five years old, her musical talent became evident. Friedrich Wieck might have exaggerated when he started teaching her the piano intensively at this age. He wanted to introduce her to the public as a child prodigy as early as possible. In today’s world, his approach would have been seen as exploitation of a child.

On the other hand, Wieck may have been worried about putting too much pressure on his daughter. Different sources say he made sure Clara took long walks. Also she learned foreign languages. But music played a huge role. After only a few years in primary school, Clara was taught by private teachers. That way, more piano lessons could be built into her schedule.

Two years before her death, in 1894, Clara Schumann said her father had indeed been very understanding. He had always made sure she would not practice too much. People would of course call him a tyrant, “but I thank him on a daily basis.”

When we look at Clara Schumann, the gender aspect is quite important, even though it should not be. Born 202 years ago, on September 13th, 1819 in Leipzig as Clara Wieck, she became a famous composer in spite of being a woman. Even today, so many decades later, there is a gender issue in this field. Women are absolutely underrepresented in the world of famous composers, even in 2020.

Something happened when Clara Wieck was 8 years old. The future star composer Robert Schumann, who was then 20 years old, came to live with the Wieck family. He wanted to be taught on the piano by Friedrich Wieck. Even while Clara was still a little child, they supposedly got along very well.

Once she was 16, love kicked in. Schumann, who would be one of the most respected German composers one day, just like Clara, even dedicated a composition to her. ‘Chiarina’ became part of his piano cycle ‘Carnaval op. 9’.

As opposed to Clara Wieck and Robert Schumann, Friedrich Wieck was not exactly happy about the relationship they had. In fact, he took her on long concert tours and forbade any communication in letters, long before the telephone, chats and e-mails were invented. Later, Wieck brought Clara to friends of his, who were supposed to make sure she would not see Schumann.

But they supported the relationship. In the summer of 1837, Clara secretly became engaged with her boyfriend. At this moment in time, Clara Wieck became a star in Vienna, where she gave a series of concerts. After a long stay in Paris, she moved to Berlin in order to live with her mother. Her parents had separated shortly before.

Now Clara finally had the opportunity to see Robert Schumann. But in those days, marriage was not possible without her father’s consent. They took him to court to get the latter. Then, finally, on September 12th, 1840, Clara Wieck became Clara Schumann. The two lovers were together. Forever.

The couple’s apartment in Leipzig became a haven of love and music. Very often, the Schumanns welcomed visitors they would play their compositions for in private concerts. Many fellow composers were among them, including Felix Mendelssohn Bartholdy, who lived in Leipzig as well, Hector Berlioz, Franz Liszt and Richard Wagner.

For Clara Schumann, a problem arose. Her husband wanted her at his side. She was supposed to support him and play the piano less than before. This aspect was hard to digest for her. At the same time, Robert Schumann encouraged his wife to keep on composing pieces.

Two daughters were born in 1841 and 1843. Another six children followed later. Seven of them survived their childhood. A reconciliation with her father Friedrich Wieck was reached. Clara Schumann kept on performing, in spite of her husband’s wishes, and contributed to the family’s income. They moved to Dresden, and later to Düsseldorf.

Over the years, it was Clara Schumann who helped Robert Schumann become a famous and respected composer, by interpreting his pieces on stage, apart from her own.

Johannes Brahms, yet another future star composer, visited the Schumanns when Robert was already very ill. Brahms fell in love with Clara Schumann. It is unclear whether they became lovers, but the letters they wrote to each other sounded that way. Only some of those letters survived.

At some point, Clara Schumann moved back to Berlin, and later to Frankfurt. At age 71 she gave her last concert. She suffered from chronic headaches which affected her hearing. After two strokes, she died on May 20th, 1896, at age 76.

Rediscovered in the 1960s

After her death, her work was largely forgotten. She was mainly remembered as a great pianist and as Robert Schumann’s wife who had promoted his legacy. But in the 1960s, her own compositions were rediscovered. Today, lots of interpretations of her pieces are available, along with her pieces on music sheets.

Clara Schumann’s face was on the 100 Deutschmarks banknote in the reunited Federal Republic of Germany. “The lady on the 100 Marks bill” is unforgotten. She will live on forever, in her truly beautiful music.

In Germany she was celebrated around her 200th birthday two years ago, both on and off stage. In September of 2019, the Schumann Festival in Leipzig honored her. The Gewandhaus Orchestra played her Piano Concert at the Gewandhaus Concert Hall.