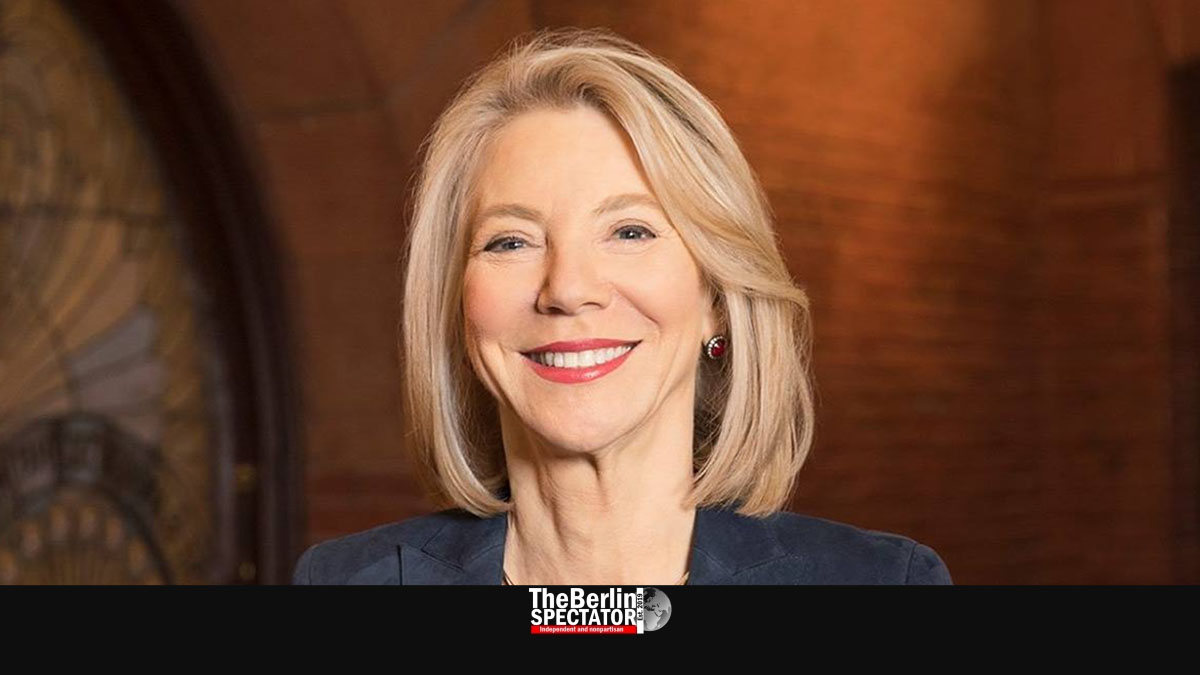 If confirmed by the United States Senate, Amy Gutmann will become Ambassador to Germany soon. The President of the University of Pennsylvania has German Jewish roots. She would be the first woman in this position.

Berlin, July 5th, 2021 (The Berlin Spectator) — The announcement was made on Friday. In Washington D.C., President Joe Biden nominated Amy Gutmann to serve as U.S. Ambassador to Germany. Both her family history and her background make her an interesting pick, to say the least. Only hours after the nomination, Amy Gutmann informed the staff and students at the University of Pennsylvania which she has been President of for 17 years, almost to the day.

“I cannot overstate what a meaningful and extraordinary honor it is to be nominated by the President for this important position of service to our country”, she wrote. “As the daughter of a German Jewish refugee, as a first-generation college graduate, and as a university leader devoted to advancing constitutional democracy, I am grateful beyond what any words can adequately express to President Biden for the faith he has placed in me to help represent America’s values and interests to one of our closest and most important European allies.”

Ambassadorial appointments required U.S. Senate confirmation, the longest-serving ‘Penn’ President added. She noted that hearings had not been scheduled yet. “I will continue to avidly work as Penn President until then or the time when there is a Senate confirmation, which would likely mean that I would be leaving the presidency several months earlier than previously planned.” Gutmann was supposed to stay in her position until June 30th, 2022. “Until that time, I remain absolutely energized and engaged in leading Penn with an unrivaled leadership team and community of faculty, students, staff, and alumni”, she said.

Nobody around her had the slightest doubt she would continue, for now, with the same level of energy, even before she uploaded her statement to the university’s website. Amy Gutmann is a very dedicated person. The politics professor has written and co-written as many as twenty-seven books. Born in 1949 in Brooklyn, she started teaching at Princeton University in 1976. This continued until she became President at ‘Penn’. On the first day on the job, she announced an innovation program which was supposed to make the University of Pennsylvania both “a global leader in teaching, research, and professional practice, and a dynamic agent of social, economic, and civic progress.” It succeeded.

Not only is Amy Gutmann one of the most-quoted politics professors and university presidents, but also one of the highest paid in the United States of America. As Ambassador, she will definitely earn a lot less. But this is obviously not a priority to Amy Gutmann. Her father Kurt Gutmann was part of a Jewish Orthodox family in Feuchtwagen (Bavaria). Shortly after the Nazis came to power, he fled. Since his application for asylum in the United States was denied, he ended up in India. In the late 1940s, he married the nominee’s mother Beatrice in New York and moved there. Amy Gutmann’s husband and daughter are university professors as well. He works at Columbia, while she is at Princeton University.

Former President Donald Trump was going to make Douglas Macgregor Ambassador to Germany. The book author and TV commentator with a military background was supposed to take over when Ambassador Richard Grenell left, who had triggered quite a few controversies in Berlin. Amy Gutmann is obviously a very different choice who will likely take very different approaches during a time in which the transatlantic relations are improving again.