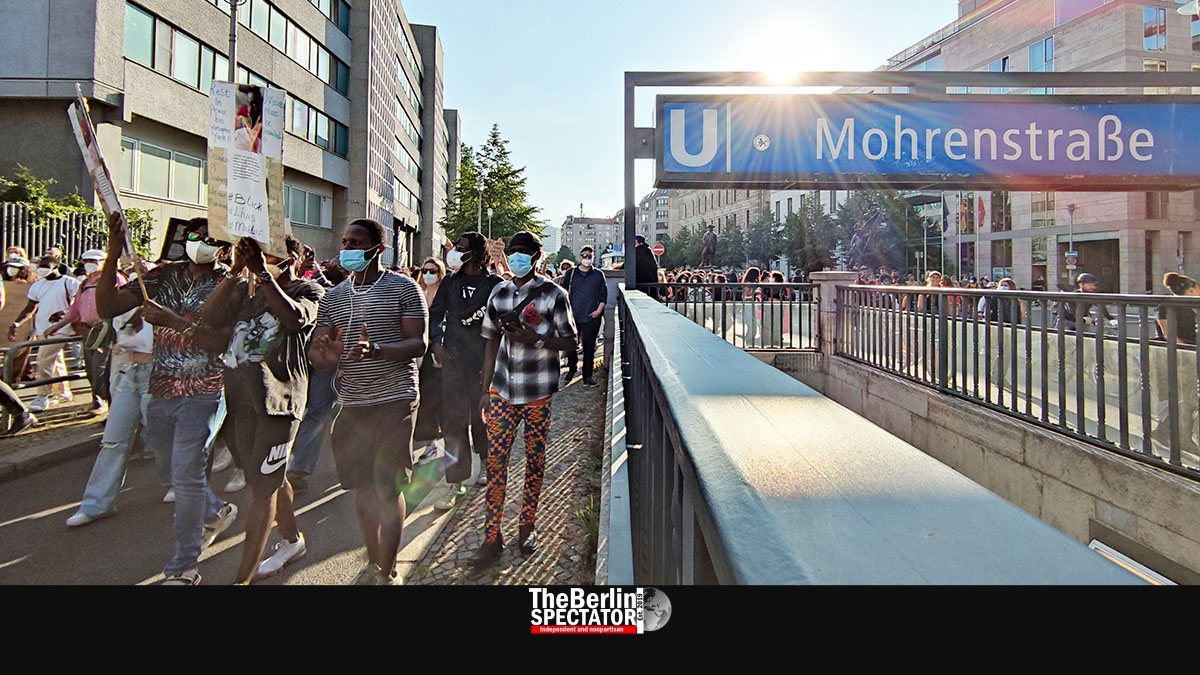 Berlin just ended a nice weekend with some clouds and a lot of sunshine. Since Friday, our reporter took several trips through the city on his bike. The total distance was 71 kilometers (44 miles). This is what he came across.

Berlin, July 5th, 2021 (The Berlin Spectator) — As I was on my way back to Neukölln from the eastern city center on Friday, I noticed quite a few police vehicles at Mohrenstrasse. This was where the latest Black Lives Matter protest was staged (see photo at top of page). A speaker said there was “structural racism” at Germany’s authorities as the rally of several hundred people started moving towards Checkpoint Charlie. It was unclear what the rather harsh accusation was based on. It may have been the latest racism scandal in Hesse, but the state government in Wiesbaden reacted swiftly.

Saturday was Julian Assange’s 50th birthday. At Brandenburg Gate, dozens of protesters demanded his release from a jail in Belmarsh, a town close to London. A few hours earlier, at the same spot, one thing became evident: The tourists are definitely back. Six ladies with thick Bavarian accents asked me to shoot a nice photo of them in front of the Gate. We did a fisheye shot using a smartphone they gave me. The result seemed to be satisfactory. Some tourists followed tour guides on rented bicycles, others seemed determined to find their way on their own.

Just a few blocks further east, Berliners and tourists cared about the late actor Bud Spencer more than about protests. Spencer’s actual name was Carlo Pedersoli. The Italian national starred in dozens of movies. In all of them he played a character who would resolve his conflicts using his fists rather than with words, with considerable success. Especially 12-year-old males were die-hard fans, including the author of these lines, decades ago. As it turns out, Bud Spencer now has his own museum and a merch store in Berlin. At this new tourist magnet, people patiently waited in line.

In neighborhoods located near certain parks, those loud Techno parties are becoming more annoying every time. Residents cannot sleep because of those constant beats which echo through parts of the city all night long. When those party people are done dancing and throwing their trash all over the place, they walk home. While they do, they shout on the street and wake people up yet again.

At Hasenheide Park, the police are obviously overchallenged. They would need hundreds of officers there to stop all illegal parties at this particular park. But Berlin is a big city, meaning the police are busy enough at other spots. At 6:00 a.m. on Sunday, the beats that came out of Hasenheide park were still annoying. I found a rather large party crowd behind some bushes. These people were still not ready to call it quits. Yes, the whole subject of illegal parties in parks is annoying, including all the noise and the trash.

Many Berliners took bike rides, frequented restaurants and public swimming pools as well as Berlin’s two zoos. This year’s first ‘Museum Sunday’ gave people the opportunity to visit 61 museums for free. Of course, all tickets for the most important museums were taken quickly.

People generally seemed to be enjoying themselves a lot this weekend. After 16 months of Corona, they deserved it. Over and out.