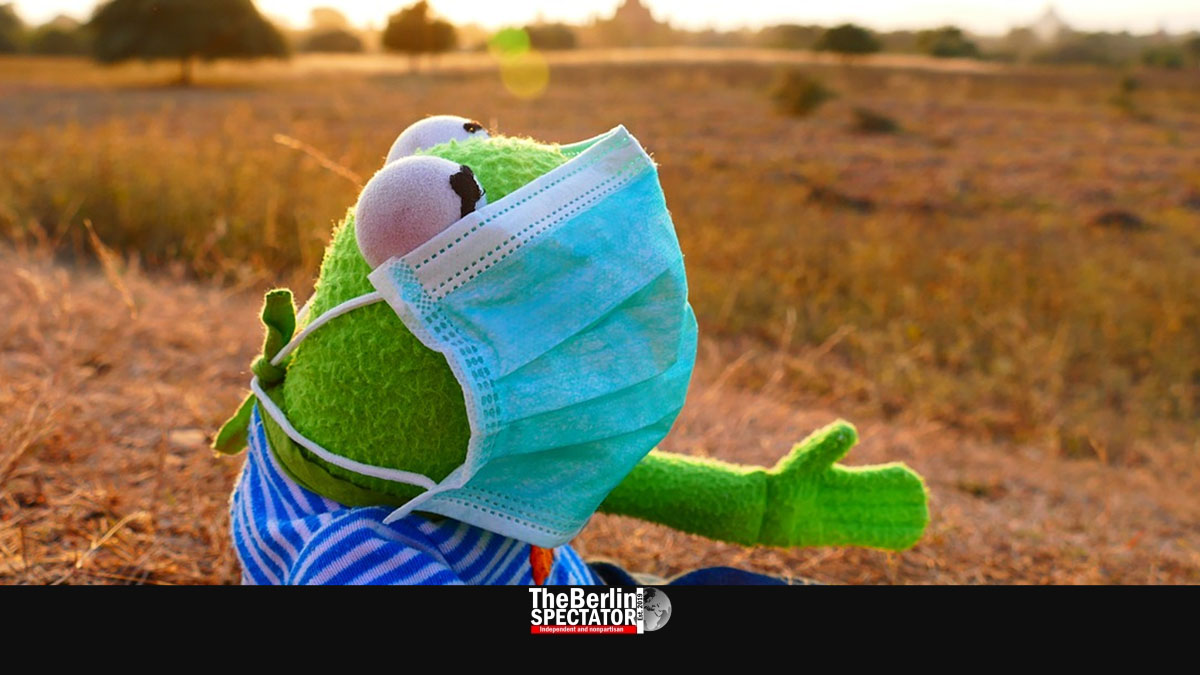 After the general elections in September, the German Greens intend to lead. There is a problem though. And there is an enlightening party history.

March 1st, 2020. Update: July 9th, 2021 (The Berlin Spectator) — Frogs, including Kermit, cucumbers and the leaves on the trees have always been green. Some four decades ago, this color became political. On January 13th, 1980, eleven months and two days before today’s co-chairperson and candidate for Chancellor Annalena Baerbock was born, the foundation assembly of the German Greens gave birth to their party. They wanted it to be social and ecological. It also stood for direct democracy and nonviolence.

In the federal state of Baden-Württemberg, located in West Germany’s south-western part, people started noticing the new party only two months later, when six of its members entered the legislative assembly in Stuttgart, after the Green’s very first success in elections. Today, the same federal state is being ruled by Winfried Kretschmann, the first and only First Minister the Greens have.

The story started in 1977. It was a difficult year. Domestic left-wing terrorists of the Red Army Faction challenged the young democracy by committing murders and other crimes. At the same time, a movement against nuclear power developed and grew.

The so-called peace movement, consisting of hundreds of thousands of people who were opposed to NATO’s Double-Track Decision or any missiles with nuclear warheads in West Germany, was another source of support for the future Greens. On this issue, the Social Democrats under Helmut Schmidt had moved towards the right, while the Greens provided an alternative to many left-wingers.

By 1982, the Greens had entered three more legislative assemblies. Half a million people took part in a gigantic protest against President Ronald Reagan that year, when he visited Germany and told “Mr. Gorbachev” to “tear down this Wall.” On March 6th of 1983, the big day had arrived. With 5.6 percent of the vote, the Greens moved into the Berlin Bundestag.

At that time, they were insulted as crunchy-granolas (‘Müslifresser’) and slobs (‘Chaoten’). Many conservatives also had a problem with the Greens’ looks. Female MPs came to the parliament sessions in long, colorful skirts. Men wore long beards. They knitted during the parliament’s sessions. Back then, some conservatives called the Greens left-wing radicals who were a danger to democracy. Today, they are their coalition partners.

During the second half of the 1980s, a big rift between “funamentalist” Greens and “realists” was noticeable. The latter wanted to govern with the Social Democrats. But the “Fundis” rejected anything of the kind while dreaming of Utopia. In 1985, the West German Greens made history again: One of their members, Joschka Fischer, became Environment Minister in the federal state of Hesse on December 12th.

The Fall of the Berlin Wall on November 9th, 1989, changed the world, including Germany. Within the West German Greens, a big discussion about a reunification of Germany developed. Many were not happy with the idea. But in March of 1990, the party threw the anti-unification position overboard, just on time. Soon after it happened, the Western Greens merged with the Eastern ‘Bündnis 90’ movement.

In the meantime, the discussion about humanitarian and peacemaking missions of the Bundeswehr, Germany’s armed forces, nearly ripped the Greens apart. There were those who opposed any military missions, and those who thought Bundeswehr missions at the Horn of Africa and in former Yugoslavia were necessary for humanitarian reasons.

In 1998, the dream of many representatives of the former Green ‘realist’ faction became reality. They were part of a government coalition on the federal level, with Social Democrat Gerhard Schröder as Chancellor. Joschka Fischer, a former member of the student revolution and the man who had been Environment Minister in Hesse, became Germany’s Foreign Minister, his colleague Jürgen Trittin Environment Minister and Andrea Fischer Health Minister.

The ‘ride’ lasted until 2005. That year, Angela Merkel of the Christian Democratic Union became Chancellor, the Social Democrats (SPD) were degraded to the junior partner in her coalition government, while the Greens resumed their role in the opposition.

An issue was being noticed in the new millennium: In former East Germany, the Greens were not too successful in any election. Even today, this problem persists. But not in the south-western state of Baden-Württemberg, where Winfried Kretschmann became First Minister in 2011. In 2016, he was reelected and still is one of the big assets the Greens have.

Today, the Greens have a lot of support among young Germans. In 2019, ‘Fridays for Future’ (‘F4F’), a pupils’ movement established by the Swedish teenager Greta Thunberg, was very active. On the streets of many cities in Germany and abroad, ‘F4F’ was present all the time. Some of its members want to enter the Bundestag on Green tickets in September.

The support the German Greens can expect has more than doubled since the last elections for the Bundestag. Soon, the party might have the opportunity to govern again, maybe in a coalition with a post-Merkel CDU. Almost one in five German voters would choose the Greens if there was a general election today. Recently, the numbers decreased because of a plagiarism affair Annalena Baerbock is allegedly involved in.

In early 2020, the Greens celebrated their 40th anniversary in Berlin. Many old and new players came to the ‘Green party anniversary party’. Today’s party leaders Annalena Baerbock and Robert Habeck mingled with their predecessors and everyone else.

The history of the German Greens shows that a former stone-throwing student protest ‘hero’ like Joschka Fischer can change and become minister. A movement can actually achieve things outside and inside the parliament. The Greens won in several ways. Today, even conservatives know they were right about nuclear power four decades ago. In 2022, Germany will shut down its last nuclear power plant.

The former Muesli-munching hippies who knitted sweaters in the Berlin Bundestag are now walking around like models, in expensive suits. While they adapted in this regard, they still want to be social and ecological. Today, they are a party supported by frustrated former SPD voters and by young Germans who insist on more action for climate protection, but also older voters who believe the Greens are the most competent party when it comes to climate protection.

Once in a while, the ‘Fundi’ mentality resurfaces though. Recently, a majority of Green (local) delegates in Berlin rejected the idea of trying to get the IAA Motor Show to move to Berlin, in spite of the fact that could have attracted more visitors and more business to the capital. Besides, the German auto industry is an engine that contributes to the country’s prosperity substantially. Why would anyone scare away its representatives? Again, Green ‘realists’ were furious.

Some Greens in Berlin and Brandenburg oppose the construction of Tesla’s factory on their turf, while Berlin’s Green Commerce Senator Ramona Pop told her party colleagues it was not necessary to “oppose everything”.

Later this year, the Greens might very well become part of the federal government again. They could be the CDU’s junior partner. A center-left coalition with the Social Democrats and the far-left ‘Die Linke’ under a Green leadership is unlikely because the math does not support this model anymore, according to the latest polls. Besides, ‘Die Linke’ has a strange election manifesto which makes this party incompatible with all others, including the Greens.