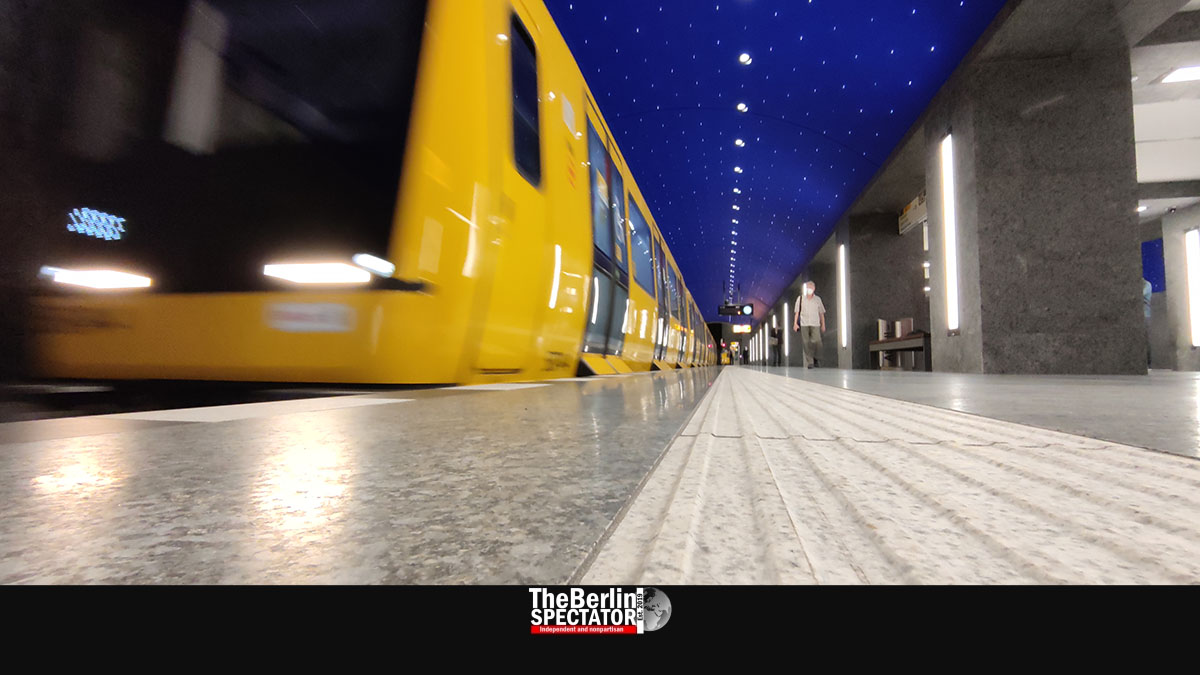 Today, the number of Berlin’s ‘U-Bahn’ train stations increased to 175. The nicest one of them all is ‘Museum Island’, the station that was inaugurated today. It features a star-spattered sky.

Berlin, July 9th, 2021 (The Berlin Spectator) — If they had dug any deeper, they would have ended up in China. On Friday, Berlin’s Commerce Senator Ramona Pop and Eva Kreienkamp, the CEO of the city’s main public transport provider BVG, inaugurated ‘Museum Island’ station for ‘U-Bahn’ line 5. In Mexico City, the metro takes people places, in New York City it is the subway and in London they call it tube. Do any of them have stations with starlit skies? No. But the ‘U-Bahn’ does.

Max Dudler, the Swiss architect who designed the new station, created a tribute to the Prussian architect Karl-Friedrich Schinkel. For instance, the inspiration for the star-spattered sky came from a set decoration Schinkel designed in 1816 for a performance of Mozart’s ‘The Magic Flute’. The sky in deep blue and those 6662 points of light that were installed as stars make the whole place a magic location. Besides, those yellow BVG trains look great in combination with the blue Dudler chose, don’t they?

‘Museum Island’ is a very touristy station. Seven museums are located here. So are the new Berlin Palace and Berlin Cathedral. The youngest ‘U-Bahn’ stop is one of three new ones that were supposed to be inaugurated together in December of last year. ‘Rotes Rathaus’ (‘Red City Hall’), ‘Museum Island’ (‘Museumsinsel’) and ‘Unter den Linden’ close a gap on the U5 line. In the past six and a half months, the subways skipped ‘Museum Island’ because its completion was delayed.

The slight delay had to do with Corona and the station’s rather complicated construction. When the project was initiated, the engineers in charge needed to think of a way to dig into a lot of ground water and mud without drowning. They came to the conclusion that they had to freeze the ground in order to go ahead. So they stuck several pipes with some chemical into the ground. At today’s inauguration, Commerce Senator Ramona Pop, who is also the chairlady of the supervisory board at the BVG, said everyone involved had had some sleepless nights back then, until they had known that the freezing strategy had actually worked.

For the BVG, Eva Kreienkamp stated it was appropriate to have an ‘U-Bahn’ station at Museum Island, also because this location was part of the World Cultural Heritage. She said the new station was not only a commodity, but a place where people would actually like to go. She thanked everyone involved, including Jörg Seegers, the project manager whose team built the whole thing. While ‘Museum Island’ is the nicest station in Berlin, ‘Unter den Linden‘, another one of the three new ones, is definitely the most elegant ‘U-Bahn’ stop the German capital has.

Today’s inauguration took place at a good moment. Now that the Corona infection numbers are very low, some tourists have returned to Berlin. They will now be able to get to Museum Island a lot faster and to admire the starlit sky down there. On the other hand, those who walk, up there on the surface, will see a lot more of Berlin. Speaking of the surface: The entrance to the new station at Berlin Palace was not ready this morning. Construction workers were rather busy. But ‘Museum Island’ is open to passengers anyway.