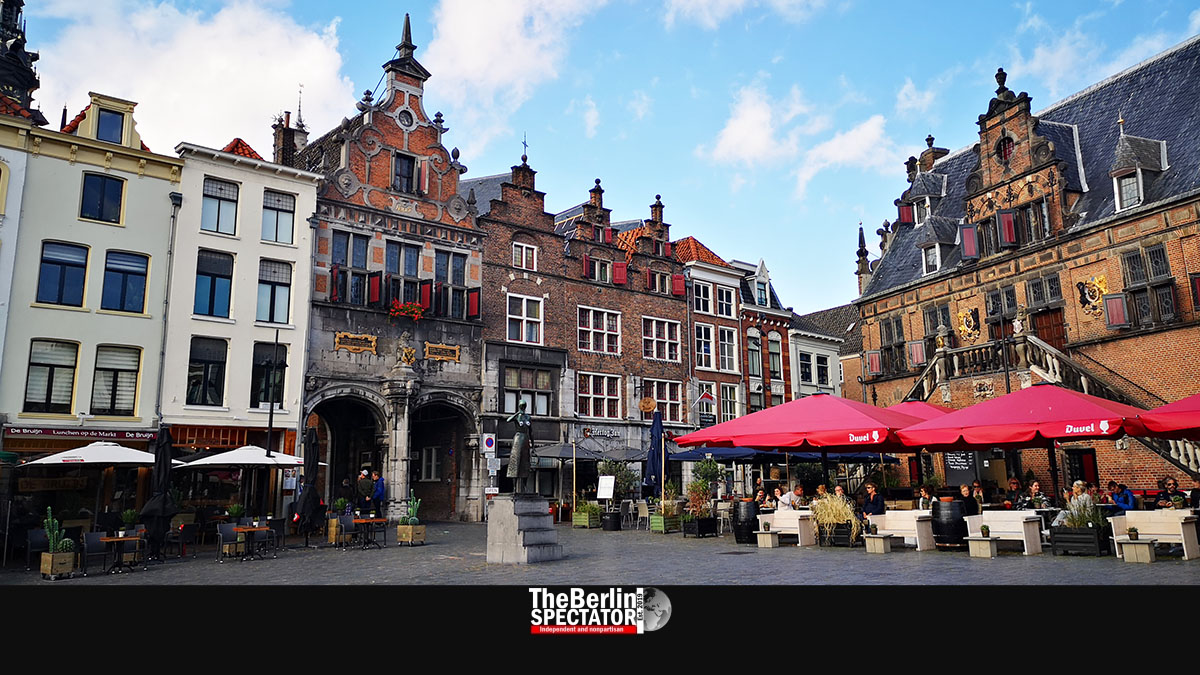 Sometimes it is good to visit the neighbors, to see what they are doing. Our reporter ended up in Nijmegen three times in the past year. He found a beautiful university town with a lot of history, bike bridges and a beach at the Waal river.

Berlin/Nijmegen, July 13th, 2021 (The Berlin Spectator) — In order to get to Nijmegen from Berlin, just race along the Autobahn no. 2 to Hanover, Bielefeld and Dortmund. Then hit the ‘A57’ until you see a big blue sign that says “Nederland”, which obviously is “Netherlands” in Dutch. From this spot, Nijmegen, the oldest town in the country, is only some 20 minutes away. You just made it to the country of tulips, cheese and windmills. There is a lot of great culture there too. And history, especially in Nijmegen.

In case you do not know how to pronounce Nijmegen in Dutch, welcome to the club. I have been there three times and I still do not have the faintest clue. But I liked this place a lot and was surprised about many things. The better part of the city center is a nice pedestrian zone with a tiny aqueduct built into the ground. Just follow it. At some point, after having some delicious apple pie with a decadent portion of cream, you will hit the medieval marketplace. City Hall is a stunning Renaissance-style building erected in 1555. It has a torture chamber.

Saint Stephen’s Church is even older. It was consecrated in 1273. Exactly 748 years later, today, it still dominates the city and obviously is one of its main sightseeing spots. But Nijmegen is a lot older than this nice church. In 2005, the town celebrated its 2000th anniversary. In the year 19 B.C, the Romans set up a military base right there at the Waal river. One hundred and twenty-three years later, they turned it into a civilian settlement. The rest is history. Literally. About 1,000 years ago, Nijmegen became a trading post. Over the centuries, it was conquered by all kinds of kings and armies. Then, finally, in 1815, it became part of the Kingdom of the Netherlands.

During the war, Nijmegen was accidentally bombed by the Allies who may have mistaken it with Kleve, a town on the other side of the border, in former Nazi Germany. Hundreds died. Before WWII, and even more afterwards, Nijmegen became a university haven. The Catholic University was founded in 1923 and became ‘Radboud Universiteit’ in 2004. Since its foundation, it has attracted thousands of students from all over the world, including neighboring Germany.

Nijmegen does have beautiful residential areas around its beautiful city center. Those red brick houses look nice. Besides, the town seems to be well organized. This applies to the public transport and the pedestrian zone which features barriers that open for delivery vans in the mornings. The rest of the day, they keep motorists out. A cheese store right in the city center offers giant Gouda wheels. At the market place, delicious fish snacks are being offered.

One of the most fascinating aspects? Nijmegen has won the ‘Best Dutch Bicycle Town’ award a few times, for a reason. First of all, the Via Romana long distance bicycle highway runs through Nijmegen. Secondly, the infrastructure built for those “fietsen” (“bicycles” in Dutch) is nothing less than stunning. Yes, bring your bike when you go there. There are excellent and safe bike lanes all over the place and even bridges exclusively for bikes. No wonder a million bikes are parked all over the city. The bike parking facility at central station is crazy. Every few seconds, a person appears to look for his or her velocipede. Some search for half an hour because there are far too many of them. Are the Dutch crazy in this regard? Absolutely.

Nijmegen offers a lot more than universities, cheese, bike parking facilities and history. How about a beach at the Waal river? Yes, the Dutch actually jump into the rather cold water while those freighters are being steered by. The ships have been here for a thousand years. By the way: As it turns out, Nijmegen is not the only “oldest town in the Netherlands”. The other one is Maastricht.