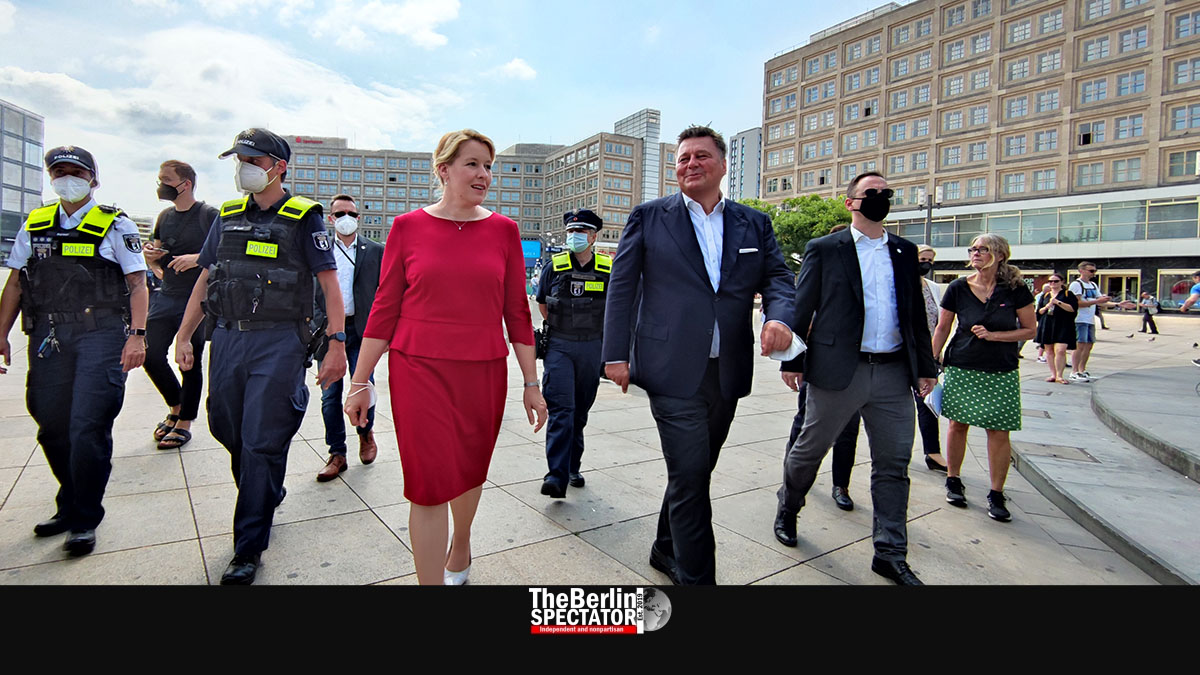 On Thursday, Berlin’s Interior Senator Andreas Geisel and the SPD’s candidate for Governing Mayor Franziska Giffey appeared at Alexanderplatz in order to talk to police officers. Two months before the elections, this obviously was about campaigning as well.

Berlin, July 16th, 2021 (The Berlin Spectator) — Andreas Geisel is a Social Democrat (SPD) and Berlin’s Senator of the Interior. In this position, he is responsible for the police. He knows Berlin has less dangerous and more dangerous spots at which the number of crimes committed on a daily basis is high. One of the latter is Alexanderplatz, the largest square in Berlin, and in Germany. This is where he went on Thursday, with Franziska Giffey, Germany’s former Family Minister and the SPD’s candidate for Governing Mayor of Berlin.

Her mission was to inform herself about security at Alexanderplatz and to do some campaigning at the same time. On September 26th, 2021, both the national elections for the Berlin Bundestag and the state elections for the Berlin House of Representatives will take place. A bit more than two months ahead the big day, Mrs. Giffey and her party are still trailing behind in the polls. The Greens are stronger. Therefore, Franziska Giffey is using all opportunities she gets to get the support she needs.

Senator Geisel said the sense of security at Alexanderplatz needed to be increased. In 2018, a police station was set up in the middle of the square. This step may not have brought down crime a lot, but Berliners who cross the square do feel safer now because they know the police are only a few steps away. Andreas Geisel said he had recently been at the square without his bodyguards a few times. During the day, everything had been fine, but there had been issues at night: “When it got dark, the clientele suddenly changed”, he stated.

He now wants to improve the illumination under the ‘S-Bahn’ train bridge that crosses Alexanderplatz. Both Geisel and Mrs. Giffey, who recently stepped down as federal minister because of a plagiarism scandal, entered the police station to talk to officers for a while. One of the subjects they discussed was crime prevention by implementing structural changes.

The police at “Alex”, which how Berliners call the square, has a lot of work. There are pickpockets and other thieves they have to deal with. Violence continues to be a problem as well. The Berlin Police Department at the “Alex” station closely cooperates with the Federal Police which is responsible for all train stations in the country, including the one at Alexanderplatz. Franziska Giffey said the city state of Berlin needed to do more. “Many Berliners want more security”, she said. For that purpose, the police needed to be backed by the politicians. Her party, the SPD, has been ruling Berlin without interruption since 2001.

Andreas Geisel and Franziska Giffey also walked across the square with quite an entourage consisting of police officers and reporters. She was stopped by Berliners who wanted to talk to her or shoot selfies with her. A police commander explained the general situation to her. An officer on site told The Berlin Spectator there was something he and his colleagues were dealing with all the time apart from crime. According to him, they need to give directions all the time. In many cases, especially in the case of tourists and elderly people, this was absolutely fine, he said. But young people with cell phones in their hands asked for directions all the time as well, which was rather annoying.