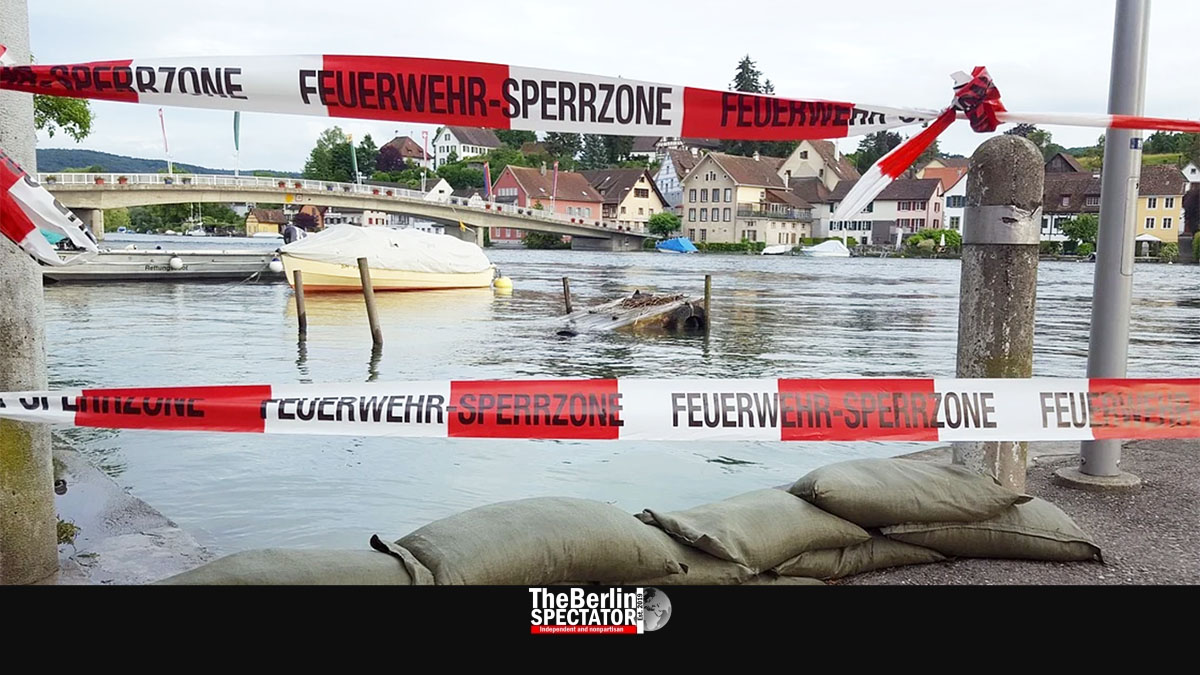 In Germany, politicians want more people to get vaccinated because the country is still far away from the herd immunity experts are building their hopes on. Different approaches are being discussed. In the meantime, the floods in western Germany could help the Coronavirus.

Berlin, July 20th, 2021 (The Berlin Spectator) — In Germany, there are worries the Coronavirus might spread faster in the areas affected by last week’s deadly floods in the west of the country. David Freichel, an officer who is part of a Corona task force set up by the state government in Rhineland-Palatinate, told the ‘Reaktionsnetzwerk Deutschland’, many people were coming together these days in order to deal with the flood crisis. It was important to make sure those gatherings would not become ‘super spreader events’.

Many residents whose homes were destroyed or damaged, and those who cannot reach their homes because the streets are flooded, are staying at collective accommodations right now. In the Corona crisis, this is an issue, on top of the many problems the survivors of the floods have anyway. Helpers who are searching the rubble for victims and cleaning up villages and towns hit by the floods are close to each other as well. The authorities in North Rhine-Westphalia and Rhineland-Palatinate are hoping this situation will not lead to even more Corona infections.

Germany’s Seven Day Incidence is now 10.9. With an Incidence of 18.0, Berlin is the country’s Corona hotspot. The numbers have not been this high since June 10th. Half of Germany’s federal states now have two-digit Incidence levels. Just a few weeks back, none of them did. Experts have no doubt the more aggressive Delta variant of the Coronavirus is to blame. So far, the increase in new infections is not nearly as high as it became in countries like Portugal, Spain, the United Kingdom or the Netherlands in the past weeks, but a scenario of this kind in Germany cannot be ruled out.

In the meantime, a discussion about pressuring people to get vaccinated is going on. Several politicians from Berlin and other federal states believe individuals who refuse to get vaccinated should start paying for the Corona tests they need to enter restaurants, museums and other places themselves. About just as many politicians reject this kind of approach. So far, quick Corona test are free all over Germany. They are required when people want to be part of indoor events, but do not have vaccination certificates.

Germany has been trying to increase the number of vaccinations again since the numbers started dropping some two weeks ago. Pressuring people into getting their shots is one way. Another approach some federal states chose to follow is to bring the vaccinations to the people. The city state of Berlin set up a big walk-in and drive-in vaccination point at a giant Ikea parking lot in the Lichtenberg borough. More are supposed to follow. At the same time, Berlin is closing one of its official vaccination centers, the one at former Tempelhof Airport.

So far, 86.1 million doses of vaccine have been administered in Germany. Almost 60 percent of all residents got at least one of two required vaccination shots, while 46.4 percent got both of them. The herd immunity experts are hoping for is still far away.