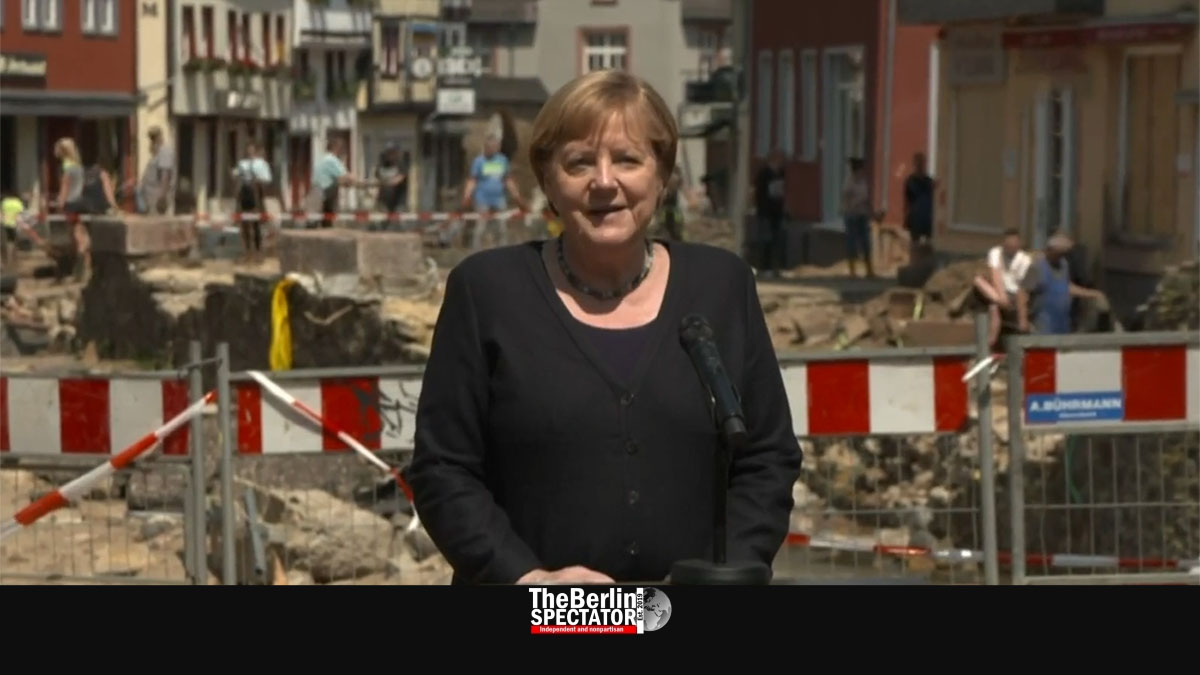 Three days after her visit in an area devastated by the recent floods in Rhineland-Palatinate, Angela Merkel went to North Rhine-Westphalia today. In Bad Münstereifel, she looked at more damage and spoke to more affected people.

Berlin, July 20th, 2021 (The Berlin Spectator) — With First Minister Armin Laschet, who may very well become her successor as Chancellor of the Federal Republic of Germany later this year, Angela Merkel appeared in Bad Münstereifel on Tuesday, where the damage caused by the floods was just as serious as in neighboring Rhineland-Palatinate. The Chancellor said the conditions were horrible. Many areas were not habitable anymore.

The solidarity people were showing was comforting, Mrs. Merkel said. Everything was being done to establish clarity in regard to the missing. The nation was mourning the victims with their next of kin. According to the Chancellor, there are no words to describe how hard the old town in Bad Münstereifel was hit. She thanked the German Red Cross, the Bundeswehr (Germany’s armed forces), the fire department and all other helpers on site.

Reconstructing the town and the area would take time, Angela Merkel predicted. She promised “unbureaucratic emergency aid” which her government would take decisions on on Wednesday. The money needed would have to reach those in need quickly, the Chancellor stressed. Some had been left with the clothes they were wearing only. A reconstruction package will follow. The state, the federal states and the municipalities intend to rebuild roads, train tracks and bridges as quickly as possible. Merkel promised the government would do its job by making sure things would progress, step by step. Her audience on site applauded.

Armin Laschet said 47 people had lost their lives in the floods in North Rhine-Westphalia. In Euskirchen county alone, there had been 26 victims. “We will do everything we can to remedy the material damage”, he stated. He thanked Mrs. Merkel for the emergency aid package she had announced and said his federal state would double the amount the government intended to provide. The aid would reach the needy quicky.

In some of the affected areas in the two states that were hit by the floods, residents were allowed to return to their homes for a little while to get the belongings they needed. But in many cases there were no homes people could have returned to. Numerous one-family houses, apartments and businesses are filled with mud, basements and ground floors are still flooded in some areas.

Germany’s civil protection authority is now checking whether a national alarm system could be installed which automatically sends SMS messages to people in case of emergency. Many other countries already have this kind of system. In Germany, projects of this kind sometimes fail because of the country’s obsession with data protection.