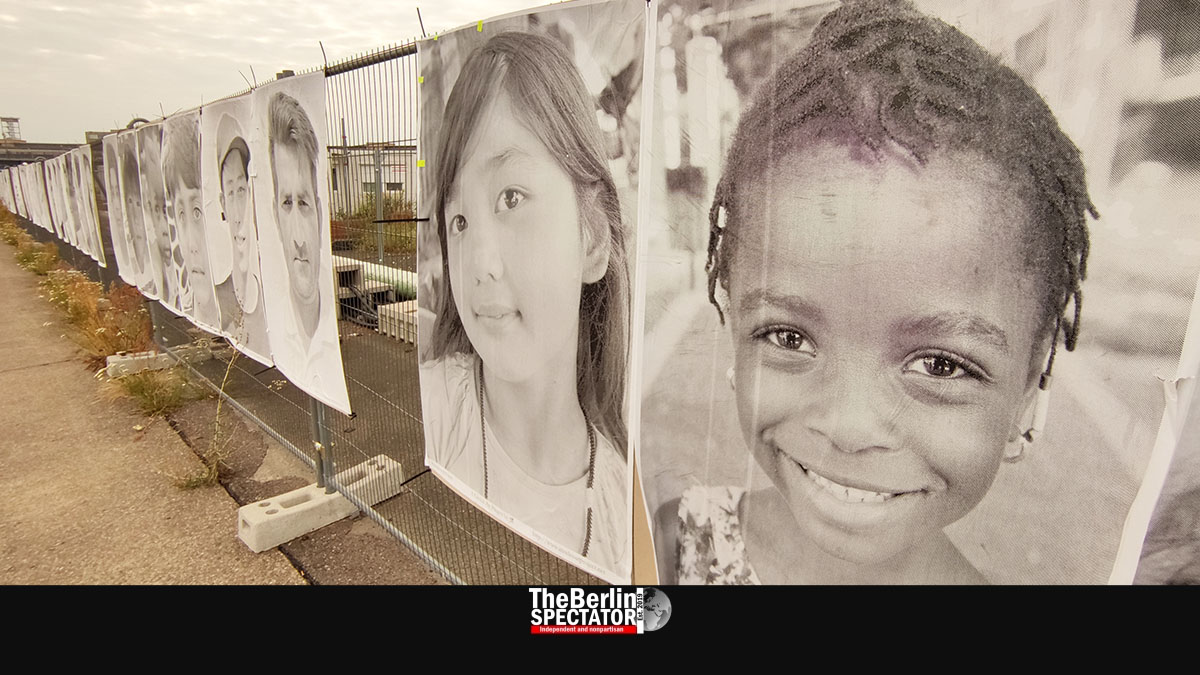 At former Tempelhof Airport in Berlin, portrait photos of 155 refugees from Kara Tepe camp on the Greek Island of Lesbos are being exhibited. The project is supposed to raise awareness for the situation asylum seekers in Greece are in.

Berlin, July 23rd, 2021 (The Berlin Spectator) — More than 1.2 million migrants have been welcomed in Germany since the refugee crisis of 2015. No other country in the European Union has accepted this many refugees. By accommodating 400,000 people, France hit the second place. There are calls for the acceptance of even more migrants from Afghanistan, Syria and other countries in the Middle East, Africa and elsewhere in Germany and Europe.

The European governments, on the other hand, know what would happen if they accepted many more refugees. By doing so, they would invite millions more to follow. Even the government in Athens refuses to send refugees from Moria or other camps to Western Europe. The Greek authorities see it the same way.

But the situation is complicated and bad. This applies to the countries of origin, the Mediterranean Sea and to the Turkish and Greek refugee camps. Simply ignoring it is just wrong. A number of activists who recently met in Lesbos decided to bring the faces of 155 people at Kara Tepe camp to the world, by exhibiting black and white portrait photos in several cities at the same time. They were taken by Coline Marteret, Fellipe Lopes, Frederike Drössler, Frederic de La Houssaye, Inès Musso and Villy Tentoma. “Europe, Look Me in the Eyes” is the title of the project.

According to the initiators and organizers, the photos are supposed to “raise awareness among citizens through art about the need to change European policies about migration and asylum.” They say thousands of people who had been forced to flee war and persecution in their countries, had arrived at “the hotspots on the Greek islands and other refugee camps in Europe only to find the same or even worse living conditions than the ones they had left behind.”

This project’s aim is “to put pressure on European governments to finally take decisions and implement policies that are of real benefit to refugees.” What the photo project’s initiators say is that there were violations of basic human rights at Kara Tepe and other camps. Those were not only illegal, but immoral. “Europe, can you look them in the eyes?” is the question the photos ask, according to the people behind the project. The exhibition actually is a protest.

At former Tempelhof Airport in Berlin, the 155 photos were fixed to a fence around a former refugee camp made of containers that were turned into little houses. Just two years ago, migrant families still lived here. Their children used to play on the spacious premises. By now, the containers are empty, and weeds have taken over the former camp. The organizers did not pick this location by accident. It is empty, while those camps in Greece are overcrowded. To the activists, the solution is simple. But to the Western European governments it is not.