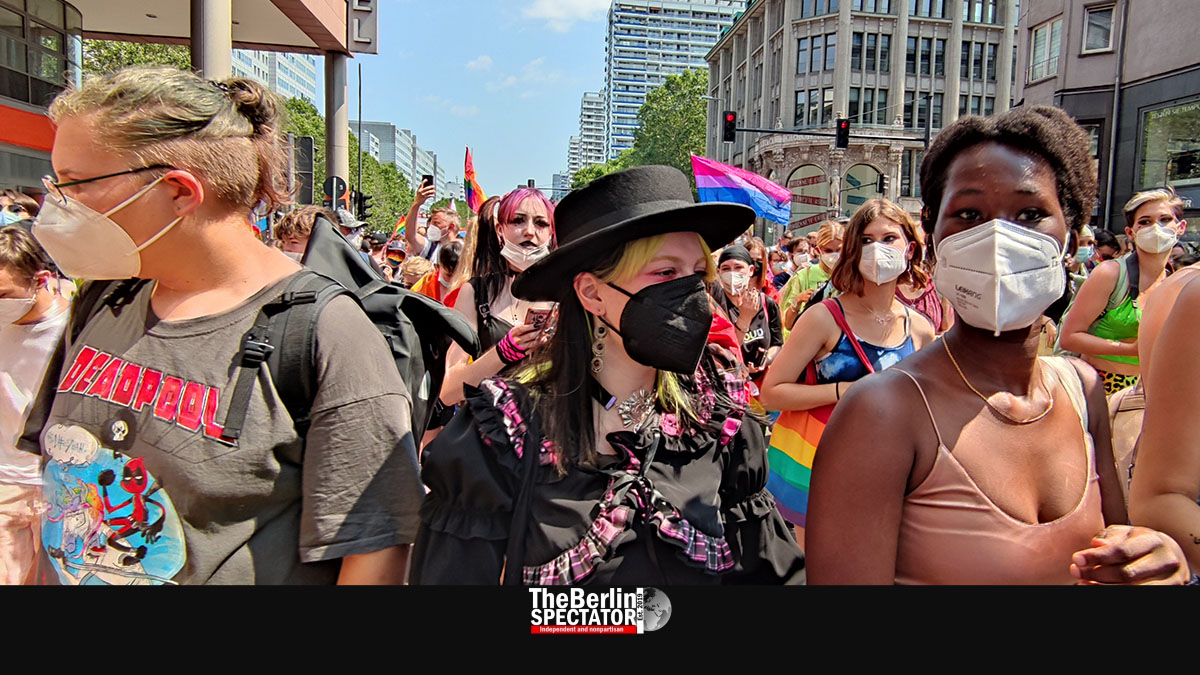 Today’s 43rd edition of Christopher Street Day in Berlin was different, because of the Corona pandemic. But it turned out to be loud, cheerful and colorful anyway. Tens of thousands of people took part.

Berlin, July 24th, 2021. Last update: 8:25 p.m. CEDT (The Berlin Spectator) — On Saturday, Christopher Street Day 2021 was rewarded with a lot of Sun and heat when it commenced at Leipziger Strasse in former East Berlin’s city center. The crowds made their way via Brandenburg Gate, Tiergarten park and the Victory Column to the Urania venue. Tens of thousands of members of the LGBTI community and supporters were part of the big event. It started with about 15,000 people. Later in the afternoon, the organizers said 35,000 persons had been part of CSD. In the evening, the official number of participants increased to 65,000.

At one point, early on, when the protest had not even reached Potsdamer Platz, police stopped the CSD march because only about half the people were wearing their masks. About 20 minutes and several announcements later, the protest continued. Because of Corona, the organizers of this year’s edition had applied changes. The usual closing rally was cancelled. In the past four decades, the event had always had a parade character which included countless trucks on which members of the LGBTI community would present themselves in clothing in all colors of the rainbow. This time, CSD was more of a protest march. Only five trucks with loudspeakers moved along with the crowd. Loud techno beats were audible.

From the start, strict rules were communicated. Keeping one’s distance to other participants and masks were mandatory. The organizers even warned people they could be excluded from the CSD if they would not adhere to the rules. Hand disinfectant was offered to the participants. An alcohol ban was in place during the march. On top of it all, people were not supposed to eat, drink or smoke, also because this would have made people take off their masks for a while.

‘Capital of the Rainbow’

This year’s motto was “Save our community, save our pride”. Some of the people in the crowd carried interesting signs. One said “If God hates us, why are we so damn hot?”. Flags with the rainbow colors were omnipresent all over the place. Equality and respect for members of the LGBTI community was what the protesters demanded.

Berlin’s Governing Mayor Michael Müller stated the Christopher Street Day had been part of Berlin for longer than four decades. He said he was very glad “Berlin’s diversity will be visible on the urban image today”. He stressed this would be the case with the necessary caution because of the Corona pandemic. Berlin was seen as Europe’s capital of the rainbow, Müller said. But even though the city was liberal and open-minded, there was a problem with homophobia which needed to be confronted.

Michael Müller reminded Berliners of the fact that lesbian, gay and transgender people were in far more difficult situations in many other countries. Even in some European states, new laws included “discriminatory positions”. He asked Berliners to think of the people who were standing up for equality and respect in those countries. They were risking persecution. Müller pledged solidarity with them.

Today, a rainbow flag was hoisted on top of the Embassy of the United States of America at Brandenburg Gate to mark Christopher Street Day. The back of the building is being illuminated in the same colors at night, until Sunday. Woodward Clarke Price, the Embassy’s Chargé D’Affairs, wished everyone a “happy pride”. The Canadian Embassy took part in the CSD march with an entire team.

Last year’s Christopher Street Day in Berlin was converted to an online event because of Corona. This year, it was split up in two. On June 26th, 2021, a pre-CSD protest march to the city center from different starting points took place. Today’s CSD march was the second part.

While the CSD was a positive and peaceful event, things turned ugly at Berlin’s Hermannplatz square at 5:00 p.m. CEDT, when BDS and other groups “borrowed” the LGBTI theme to spread antisemitic propaganda at an event called “Internationalist Queer Pride for Liberation 2021”. At this protest with thousands of participants, Israel was accused of pretty much everything, including “pinkwashing”, by giving its LGBTI community the same rights as everyone else. The pro-Palestinian protesters failed to mention a rather important piece of information: In the Palestinian areas, both the terror organization Hamas and the Palestinian Authority persecute homosexuals. They are being arrested, tortured and even murdered.

But this aspect obviously was not important to the “Queer Pride”. The protesters chanted antisemitic slogans. One of them was “From the river to the sea, Palestine will be free.” In these circles, this is code language for “Israel needs to be annihilated”. At this protest, aggressive organizers harassed reporters, including the author of these lines. They tried to deny media representatives the freedom of press the Federal Republic of Germany grants them by law. After several harassment incidents, an official for the German Union of Journalists made sure the reporters on site were protected by the police.