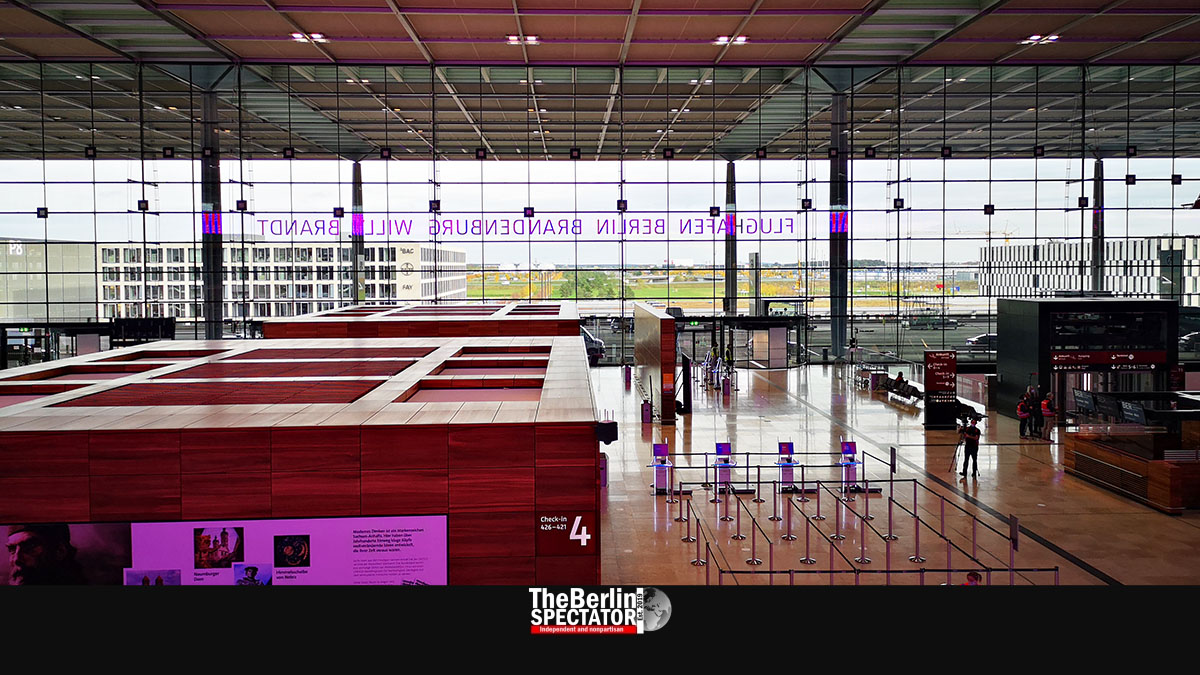 In spite of the deteriorating Corona situation in Germany, lots of passengers are being counted these days at BER, the new airport for the Berlin Brandenburg region. There have not been more since the Corona crisis commenced.

Berlin, July 25th, 2021 (The Berlin Spectator) — The Corona pandemic hit Europe in early 2020. During the first Corona wave, the number of flight passengers in Berlin and Brandenburg slumped to 1 percent of what it had been before. Then, in the summer of last year, it increased to some extent, just before dropping substantially again. In late 2020, there were more Corona lockdowns than flight passengers.

The crisis has obviously affected the airline industry. Lufthansa was forced to beg the federal government for money, which it got. Germany saved the airline by pumping 9 billion Euro (10.6 billion U.S. Dollars or 7.7. billion Pounds Sterling) into its veins. Still, they needed to let employees go and get rid of many aircraft, including its Airbus A380s. Airports all over Germany, especially in Frankfurt, Munich and Berlin, became the most expensive parking lots in the solar system. Now, things seem to be improving.

FBB, the state-owned company that runs BER Airport, just announced more than 51,000 passengers had been counted there on Friday alone. This is the highest number since the Corona crisis started. It is the first time the daily number of passengers at BER exceeded 50,000 in the past 17 months. Still, the pre-Corona numbers were a lot higher. In 2019, a record year for Berlin’s former Tegel Airport and Brandenburg’s former Schönefeld airport (read separate article ‘Berlin: Early Christmas Presents for 35 Millionth Flight Passenger’), the sky was still the limit. Back then, up to 120,000 passengers were dealt with per day.

Last year, when people started traveling again in summer, only 30,000 passengers were counted at those two old airports, on the best days. BER Airport was opened in the fall of 2020, when hardly anyone flew (‘The Eighth Wonder of the World: BER Airport Finally Opens‘). The airline industry does not expect things to return to normal (whatever that may mean nowadays) until 2025.

According to FBB, as many as 60 airlines offer flights to some 50 countries from BER Airport right now. The most popular destinations are Spain, Turkey, Greece and Italy. There are three new destinations, namely Thera on the island of Santorini, Tivat in Montenegro, and the Greek island of Zakynthos. With Play from Iceland and Sky Alps from Bolzano, two new airlines use BER Airport.

“The positive trend in the past weeks is continuing in the vacations”, FBB’s departing CEO Engelbert Lütke Daldrup stated. The vacation mood could be felt at BER Airport. “We are glad our new Terminal 1 is establishing itself well with more traffic, and that we can take care of our passengers optimally.” He said Corona needed to be kept under control in order to make sure the desire to travel would last throughout the summer and beyond.